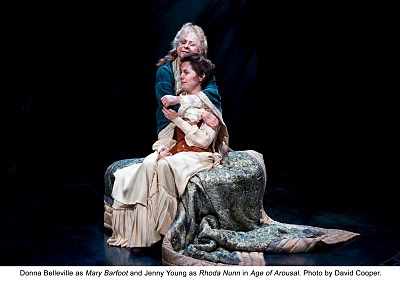 Age of Arousal, the title of Linda Griffiths’ play, contains the mildly titillating indication that humanity has reached a new level of civilization. After the Age of Faith and the Age of Reason, we have progressed to the age when we can finally get sexually excited. The sexual liberation of women was an important part in the struggle for the emancipation of women in the 19th and 20th centuries but that was not the central concern.

Women were not fighting merely for legal, social political, and yes, sexual, rights: they were fighting for recognition as people. In 1876 a British court had ruled that "Women are persons in matters of pains and penalties, but are not persons in matters of rights and privileges." As late as 1928, the Supreme Court of Canada, when asked if women are persons, had resoundingly answered “no.”

Linda Griffiths’ play was, in her words, “wildly inspired by The Odd Women, a novel by George Gissing.” It deals with women trying to assert the fact that they are persons. Mary Barfoot (Donna Belleville) is a 60 year old woman and she has set up a business teaching woman to type. This is a great leap forward because it means that women can work and be paid instead of being indentured to the wealthy or to their husbands.

One of the interesting facts that Griffiths brings out is that in the late 19th century there were 500,000 fewer men than women in England. That meant that half a million women could not find a husband. It was perhaps one of the factors that pushed women to demand rights and privileges to go along with their pains and penalties

Mary Barfoot has a partner in the commercial and personal sense of the word in Rhoda Nunn (Jenny Young) and they go so far as to kiss, a mild, split–second peck but a huge step for humanity, one might say.

They are joined by the Madden sisters, working class women in pretty desperate conditions, who find liberation and self-assertion. The pretty Monica finds sexual freedom while one of the others is free to wear a man’s suit.

The problem I have with the play is its structure. Griffiths is far too enamored of asides or expressions of thoughts during a dialogue. For example when Rhoda is telling Mary’s young cousin, Everard (Gray Powell), that she and Mary had a row and that they may have to separate, he tells us that he is aroused and that he noticed the swell of her breasts. They are talking about business and she informs us that she sees the bulge in his trousers. Commercial discussion on the surface and sexual arousal underneath are interesting but there are more subtle ways of indicating the latter. In the end each character becomes her own Chorus and it is simply overdone.

Acting honours go to Jenny Young. She has a wonderful ringing voice and the bearing and expression of a woman who could bring about change. Donna Belleville’s Mary was strong but her best days may have been in the past when she was a suffragette and paid dearly for her protests. Zarrin Darnell-Martin is a pretty and smart Monica who is learning the ropes of freedom and manipulation of men.

Kelli Fox and Sharry Flett are seasoned actors who bring fine performances to the roles of the Virginia and Alice Madden respectively. Gray Powell as Everard, the only man in the play, is the suave upper-crust gentleman looking for a woman for the usual entertainment.

Jackie Maxwell directed the play very capably and we do get a fine statement of a grand theme despite some structural infelicities in the play.