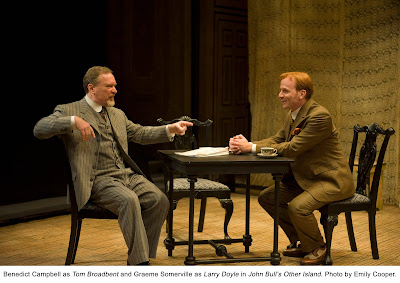 The first English invasion of Ireland took place in 1169 when King Henry II sent an army over with the permission of the Pope or so he claimed. The English stayed there despite numerous reminders by the Irish that their presence was unwelcome. The Irish views were ignored, one might say, to such an extent that the English began to regard Ireland as simply John Bull’s other island.

The relationship between the two islands was examined by Bernard Shaw, an Irishman living in London, in his play John Bull’s Other Island. It is the second play of the two and only two plays by Shaw out of the ten productions offered by the Festival that is named after him. The other one is The Doctor’s Dilemma.

We get a solid, well-acted and well-directed production. The interest in Anglo-Irish relations at the beginning of the twentieth century (the play premiered in 1904) is not as keen as it used to be. The plot (what plot?) is intended to facilitate discussion of the subject rather than the characters and the incidents facilitate examination of the political and social issues of Ireland.

The plot or incidents that provoke the discussion, if you will, concerns two civil engineers, one English, one Irish, who go to an Irish village from London in order to foreclose on a mortgage and develop the land they will acquire. They meet the colourful “locals” and that keeps the humour and brilliant discussion moving.

There is also a mildly romantic subplot. When Larry Doyle (Graeme Somerville), the Irish engineer, left the village eighteen years ago, he had a romantic attachment to Nora Reilly (Severn Thompson), a local girl. Instead of the flame between the two being re-ignited, Tom Broadbent (Benedict Campbell), the Englishman, falls in love with the girl.

That is the dramatic terrain that director Christopher Newton has to tread and he does so with a sure-footing that provides us with a well-paced and entertaining production despite the usual Shavian verbosity.

Campbell’s Broadbent is ambitious, unscrupulous and displays the assurance and arrogance of a nation used to ruling people as if by divine approval. The initial thought that Henry II conquered Ireland with the permission of the Pope has not diminished. He is enthusiastic and patronizing but he does it with panache. He sees no irony in wanting to become the Member of Parliament for the region – after all, who better than an Englishman to represent the Irish and speak about Home Rule (under English guidance) on their behalf? Benedict Campbell handles the role with assurance and aplomb.

The Irish engineer is a tall, redheaded young man who is equally adept at analyzing Ireland’s problems. He does not appear to mind that his old love is taken by his friend and partner and he is rejected even by his townspeople as their candidate for Parliament. Splendid work by Somerville.

Jim Mezon deserves special mention as the defrocked priest Peter Keegan. Keegan is an eccentric, a philosopher, a keen observer and a loner. Mezon has the accent and the bearing to bring out the fascinating and almost mythical character that Shaw no doubt intended.

Severn Thompson was unfortunately not a particularly convincing Nora. She needs to be more attractive and alluring. No wonder Larry Doyle left her eighteen years ago and paid scant attention to her when he finally returned. She is an attractive woman and Newton and designer William Schmuck should have paid more attention to her.

A production well worth seeing.

John Bull’s Other Island by Bernard Shaw continues until October 9, 2010 at the Court House Theatre, Niagara-on-the-Lake, Ontario. www.shawfest.com 1 800-511-SHAW
Posted by James Karas at 11:05 AM