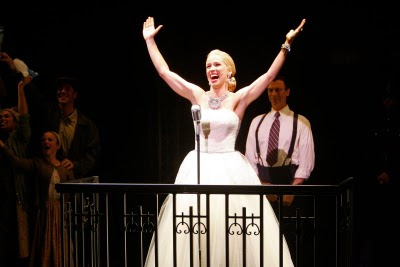 Chilina Kennedy as Eva Peron and Juan Chioran (right) as Juan Peron with members of the compnay. Photo by: David Hou

Near the start of the second act of Evita, Chilina Kennedy, who plays the name role, comes on stage. She is dressed in a stunning white gown and has a swath of diamonds around her neck. She walks with poise and grace and stops in front of some microphones.

The usually loud orchestra reduces the decibel level and the strings take up a beautiful melody as Chilina sings “Don’t Cry for Me Argentina.” Her luscious voice at mid-range carries the song and sends thrills through the theatre. It is without a doubt the highlight of Andre Lloyd Webber’s 1978 smash hit musical Evita which is now playing at the Avon Theatre in Stratford.

Unfortunately it is almost the only highlight of the musical. The melody of “Don’t Cry for Me” is heard several times during the performance, sometimes only in snippets. There are some other notable musical moments in the musical but nothing comes close to “Don’t Cry.”

Evita has garnered an extraordinary number of awards and has been performed thousands of times in the thirty-two years since it opened. It is a type of rock opera which is through-written and contains a variety of musical styles from the classical sounding chorus “Requiem for Evita” to the “Waltz for Eva and Ché” to the trenchant “And the Money Kept Rolling in” sung by Ché and the chorus. And of course the great aria, “Don’t Cry for Me Argentina.”

Much of the music sounds like stentorian recitative even when it is not intended to. There are times when you felt that there was a contest if not a war between stage and pit and the musicians, being more numerous, tended to win. Most concert organizers seem convinced that people could not possibly enjoy music at less than eardrum-shattering volumes. Evita was not at that volume level but we may have enjoyed it more at a more civilized decibel range.

Webber and Rice want to present the world of glamour, beauty and corruption as represented by Eva and Dictator Juan Peron on the one hand and the corruption and social injustice as seen through the rebel Ché (Josh Young), on the other.

Chilina Kennedy shines as Evita and her singing at mid-range is beautiful. Unfortunately, she does not do nearly as well when she has to reach for higher notes. If she did not have to fight (and sometimes lose) with the orchestra, she may have done better. Director Gar Griffin and Musical Director Rick Fox are accountable for that.

Young is a powerful performer who is given loud recitatives to point out the injustices of Argentina, a country with huge gold reserves that is going bankrupt and a nation that produces meat for export but rations food to its people.

Juan Chioran as Peron is tall and has the bearing of a gentleman if not necessarily a dictator and sings well. The be-medaled generals are there to give the military dictatorship ambience.

Evita is a definite crowd pleaser. It got a standing ovation and that’s as good a review as any production can expect.

Aside from the items that I have noted, the production did have considerable production values. Griffin kept a brisk pace throughout and the volume of the playing is no doubt part of creating and maintaining energy levels.

For me, one great song and some acceptable melodies followed by too much and too loud recitatives that are simply not to my taste do not a great night at the theatre make.