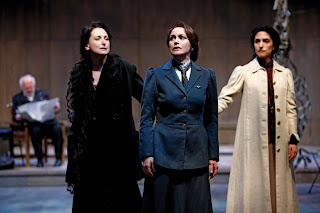 HITS AND MISSES OR THE 57th SEASON IN REVIEW


In its 57th season the Stratford Shakespeare Festival is well into middle age and we have every right to expect a varied programme of old and new plays done to very high standards. We don’t have to like everything that they do but there must be production standards and values, and a selection of works that can compare favourably with any theatrical company in the world.

After some rough patches following the retirement of Richard Monette who was Artistic Director from 1994 to 2007, management of the Festival is now in the hands of Antoni Cimolino as General Manager and Des McAnuff as Artistic Director. Cimolino was second in command under Monette and McAnuff comes with considerable theatrical experience most notably in the production of musicals. The photograph in the programmes shows Cimolino cracking a smile with his arm resting on McAnuff’s shoulder. McAnuff sports a broad smile with his arms firmly crossed. Is there a message in the body language?

The Festival offered a total of fourteen productions this year in four theatres. I saw thirteen productions (Ever Yours, Oscar, a one-man show by Brian Bedford about Oscar Wilde being the exception) and now that the season is entering its final weeks it may be a good time to give it a brief look-over.

There were four productions at the flagship Festival Theatre: two plays by Shakespeare, (Macbeth and A Midsummer Night’s Dream), West Side Story and Cyrano de Bergerac. If the Festival were to be judged solely by the quality of these productions it would not fare very well.

Macbeth had the acting and star power of Colm Feore in the lead role and the boss himself, Des McAnuff directing the season opener. It was clearly intended to be a showpiece production. Unfortunately despite some good moments the production fell flat on its face.

A Midsummer Night’s Dream, the comic Shakespeare directed by David Grindley fared little better in what appeared as an all-out attempt to kill Shakespeare. Grindley gave a punk production with some laughter evoked by the artisans but precious little else. The mixture of punk rock, gratuitous violence and 1950’s overtones resulted into a pretty bad night at the theatre.

With Edmond Rostand’s Cyrano de Bergerac we moved to 19th century French drama with the super-nosed poet and swashbuckler played by Colm Feore and directed by his wife Donna Feore.

The result is a passionless production of a play that is full of passion and passionate longing. Donna Lisman is colourless and unconvincing as Roxane in the great balcony scene. The final scene where Roxane realizes that Cyrano is her true lover evoked laugher instead of pathos. That’s as bad as you want to get.

With West Side Story the Festival hits a bull’s eye. We are treated to a muscular, energetic and simply spectacular production directed by Gary Griffin. Paul Nolan as Tony and Chilina Kennedy as Maria perform the main roles exceptionally well with Jennifer Rias doing an outstanding job as Anita. Brandon Espinoza is the athletic and agile Riff, leader of the Jets and Andrew Cao is Bernardo, the leader of the Sharks.

West Side Story is as much a ballet as a musical. There are visceral instrumental pieces that require a highly capable corps of dancers to perform them. The production has an excellent group of dancers and singers to do the job.

There are three productions at the Avon Theatre and the odds of seeing a superb one here are two out of three. The Importance of Being Earnest is the best comedy of the season and A Funny Thing Happened on the Way to the Forum is a rollickingly well done musical. The bad news is that Julius Caesar is really bad.

Forum has witty dialogue, melodious songs and a fast-moving and utterly entertaining plot. Director Des McAnuff invents much comic business and he has a tendency to go over the top. He could have gotten more with less but nothing can take way from this thoroughly enjoyable production.

Stratford is lucky in having Brian Bedford to direct and play Lady Bracknell in the almost perfect comedy, The Importance of Being Earnest. Bedford’s directing is impeccable and the performances by the main players almost flawless if one ignores the issue of imperfect English accents. Productions of Earnest are fairly frequent; outstanding ones like this one are a rarity
.
Now for the bad news. Julius Caesar directed by James MacDonald and designed by David Boechler can best be described by borrowing a few of the author’s words from Hamlet as “weary, stale flat and unprofitable.” No one can accuse the cast of taking any pleasure in Shakespeare’s words or of bothering much to share that pleasure.

The choice of plays for the Tom Patterson Theatre is more adventurous and the productions far more successful. The adventurous part is the offering of Ben Jonson’s Bartholomew Fair and Jean Racine’s Phèdre, both for the first time. What took them so long? Chekhov’s Three Sisters may not be adventurous but it is a good choice.

If Earnest is confined to the elegant drawing rooms of Victorian England, Bartholomew Fair encompasses life in London in the 17th century in all its variety, humour and exuberance as seen at a raucous fair.

The plot includes a pickpocket, a horse dealer, a whore, a pimp, a wrestler, a pig-woman, an urchin, a stilt-walker and others. The play presents an atmosphere and a world of its own and this is what Jonson created and director Antoni Cimolino captures so successfully.

Last year Stratford presented Euripides’ Trojan Women. It was a good start that should have been continued. It was not and we are given the next best thing with Phèdre. I found Seana McKenna’s performance outstanding and the production excellent although I took issue with the choice of translation which struck me as prosaic.

Anton Chekhov’s Three Sisters directed by Martha Henry was the other high drama at the Patterson. The finely nuanced production showed what a first-rate director can do with an excellent cast.

The results at the Studio Theatre were not as edifying as the productions at the Tom Patterson. Morris Panych’s new play, The Trespassers, directed by the author highlighted his virtues and his failings. He can write fine dialogue and develop characters but he has difficulty with structuring a credible plot. The play would have benefitted from the hand of a strict dramaturge.

Rice Boy by Sunil Kuruvilla struck me as a shapeless and boring play even though on paper it looks like a great choice for Stratford. It is a play with Canadian content and encompasses India and Canada. Geographical and national aptness were not enough to save the day.

Zastrozzi by George F. Walker is the third Canadian play offered by the Festival. It is one of Walker’s early plays and was first produced at the Toronto Free Theatre in 1977.

It is a strange, indeed bizarre play. Its full title is Zastrozzi: The Master of Discipline and it is supposed to take place in “Europe, probably Italy” sometime in the 1890s. There is nothing in the production to indicate the date or place of the play and it could be located anywhere.

Zastrozzi (Rick Roberts), the main character, is a German master criminal. His friend Bernardo tells us that the play is not about passion or obsession or ideas or emotions. It is much worse than that: it is about revenge. Zastrozzi informs us that he is a man who has no weaknesses and is simply extraordinary.

Zastrozzi’s archenemy is the Italian artist and dreamer Verezzi (Andrew Shaver) and he wants to get rid of him in order to avenge what he, Verezzi, has done to his mother and to wipe off his smile.

We will see nudity, sex, swordfights, killings, and a lot of insane behaviour. The play is called a comedy of revenge and I cannot even give a decent plot summary. The characters are certainly cartoonish, perhaps even escapees from a sci-fi novel. They can almost be found in some episodes of Star Trek but without a visit from Captains Kirk or Picard. They are sometimes funny but by no means funny in any conventional sense. Are they ridiculous? In a way, yes but also macabre and no doubt out of this world.

The “feel” that director Jennifer Tarver gives us encompasses all of the above characteristics and I must admit that it left me simply cold. Walker has created an insane and unique world and characters that I could not relate to and I could not figure out what the initial appeal of the play was or the reason for reviving it. Surely there are better Canadian plays by Walker and others that are more worthy of production or revival than this one.

With a looming deficit, the impulse may be to produce safe plays. It would be wrong. The Festival should show gumption in producing less known works from the classical repertoire. If they do them well, the world will notice and people will fill the theatre. The Festival should create and nurture an audience as much as entertain the existing theatre goers.

And so, until next year.

(Photo is of Stratford's "Three Sisters")
Posted by James Karas at 10:05 AM No comments: