THE BARBER OF SEVILLE AT LA SCALA - OPERA AT THE SUMMIT 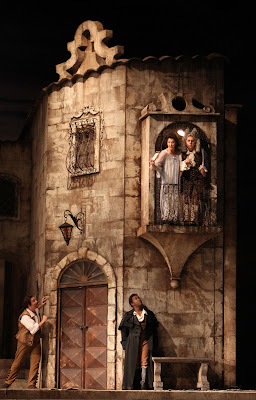 The Triple Crown of Opera has been placed on the heads of New York, London and Milan – two Anglophone and one Italian city. In awarding the coronets, one suspects that the French, the Germans and the Austrians were not consulted. What with Bizet, Wagner and Mozart batting on their side, you would have thought they would have more than a passing chance for one of the crowns.

The industrial city of Milan got the nod over heavyweight contenders like Florence where opera was “invented” and Venice where it blossomed. Paris, Rome, Vienna et. al. can eat their hearts out as mere commoners beneath opera’s crowned cities.

Needless to say, Milan’s La Scala fully deserves its place as a premier opera house and a visit earlier this summer to see The Barber of Seville proved the expected. Rossini’s comic masterpiece has been a La Scala staple since 1820 and all opera lovers have enjoyed its marvelous tunes and broad comedy from “Largo al factotum” (“Figaro, Figaro” to Bugs Bunny fans) to “Una voce poco fa” where the wily ward Rosina announces that she will have her way and that’s that.

The current production at La Scala was directed by Jean-Pierre Ponnelle in 1969 and has been remounted numerous times since with different casts. La Scala did attempt a different production in 1999 with Figaro coming down in an air balloon but it must have been a bust and the Ponnelle production was brought back.

The Barber of Seville needs a first class baritone for Figaro, a mezzo-soprano for Rosina and a tenor for the Count. La Scala has two all-star casts on hand. I saw the one with American tenor Lawrence Brownlee as Count Almaviva, mezzo-soprano Joyce DiDonato as Rosina and Franco Vassallo in the title role. It is a well-paced, superbly sung production that brings out all the comic aspects of the plot.

Vassallo is a youthful, energetic Figaro who is as good as his word when he says he can do anything. That includes singing with vigour and virtuosity. Brownlee has a marvelous tenor voice that can climb vocal heights with ease. He may not be physically suited to the role – a bit short and slightly roly-poly – but you forget all that the minute he opens his mouth.

The star and show stealer is DiDonato as the simple ward of the old Dr. Bartolo (a funny and sonorous Bruno de Simone) who not only announces but swears that she will be victorious in her quest to marry the Count. Bartolo, you see, is planning to marry her. With the help of Figaro, she and the Count will outwit Bartolo and provide a great deal of fun in the process.

The Barber needs a street scene at the beginning where the Count with a bunch of rowdy musicians serenades Rosina at dawn. Then Figaro comes barreling down the street singing his signature aria in an outburst of unforgettable exuberance. The rest of the action takes place inside Rosina’s house.

Ponnelle, however, has added a third scene. Instead of Figaro coming down the street, the set revolves and reveals his barbershop and apartment above it. Figaro slides down a pipe and tells us about his life and talents. This is silly, of course, and not called for in the libretto. As the Count is serenading Rosina, he hears Figaro coming down the street and tells his companions to let him pass. Why Ponnelle decides to switch the scene to the barbershop at that moment is a mystery.

That is a small complaint in an otherwise outstanding production.

Michele Mariotti conducts the La Scala Orchestra briskly and the result is a great night at the opera.
Posted by James Karas at 11:34 PM No comments: