Before World War II, there were 77,377 Jews in Greece living in 25 communities across the country. At the end of the war there were 10,226 left, 86% of them having been exterminated by the Nazis. The percentage of losses from each community ranges from 99% of the Jews of Xanthi and Serres to 26% in Volos.

But there is one incredible exception: the island of Zakynthos had 275 Jews living in harmony with the Christian population. Not one of them was captured or killed by the Nazis.

The astonishing story of their survival is told in Life Will Smile – The Holocaust in Greece and the 275 Jews of Zakynthos, a 38-minute film directed by Dery Cleanthous and produced by Steven Priovolos and streamed by the 2020 Toronto Jewish Film Festival on October 27 and 28, 2020. 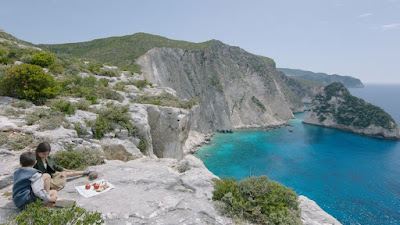 The story of the Jewish community of Zakynthos is told by Haim Konstantini who was born there in 1933. He was 83 when he narrated the film. He tells us of an almost idyllic life on the island with Jews and Christians living in harmony. But we are also informed of the murderous progress of the Nazis starting in February 1933, a month after Haim was born. We see film clips and still pictures of the the Nazis, the crematoriums, the murdered remains of people and the extermination camps that defy belief in their horror and bestiality.

After the benign occupation by the Italians, the Germans arrived and, Haim tells us, World War II began for the islanders. Hunger, mistreatment and deprivations followed. The hunt for Jews began and the mayor of the capital city, Loukas Kerreri and Archbishop Chrysostomos were summoned by Nazi officers demanding a list of all the Jews and their property.

The mayor and the bishop returned the next day and gave the officer the names of all the Jews on the island. The list had two names on it: Kerreri and Chrysostomos! We are the only Jews on the island, they said. How can there be no Jews here when there is a synagogue? demanded in effect the officer. We are all Christians, he was told.

The mayor and the bishop warned the Jews and told them to scatter in the villages around the island. Some of them hid under gravestones in a cemetery and eventually all found hospitality in the houses of Christians. Not one Christian betrayed the Jews and not a single Jew was found.

The mayor and the bishop escaped but they were found. They were tortured but did not disclose anything. The mayor’s wife was pregnant at the time and Haim movingly admits that he would not have had the courage to do what the mayor had done in similar circumstances.

Some of the incidents are dramatized and there are some beautiful shots of the island. It is an outstanding and thoroughly moving story of humanity and heroism in the face of the greatest crime in history. The lives of 275 people may appear insignificant in the face of the extermination of six million, but a tiny example of decency is extremely significant in the expanse of cruelty that the imagination could devise and evil perpetrate.

Fittingly Mayor Loukas Kerreri and Bishop Chrysostomos are recognized as Righteous Among the Nations at Yad Vashem, the Holocaust remembrance Centre in Israel. for their bravery.

P.S. The film states that 77% of the Jews of Greece were exterminated. According to the Greek Ministry of Foreign Affairs the number is 86%.

James Karas is the Senior Editor – Culture of The Greek Press. This review appears in newspaper as well.