The Shaw Festival had a creditable tradition of producing one-act plays during lunchtime. In about an hour you could see a work that you may have never seen and still have time for lunch and a matinee performance.  We have been able to see works like Chekhov’s The Bear and The Proposal adapted as Love Among The Russians (2006), J.M. Barrie’s Half an Hour (2010),  Trifles by Susan Glaspell and A Wife for a Life by Eugene O’Neill (2013) and Tennessee Williams’ A Lovely Sunday For Creve Coeur (2014).

This year’s offering is Flush, an adaptation by Tim Carroll of Virginia Woolf’s “biography” of Elizabeth Barrett Browning’s cocker spaniel of that name. The book was written as an interlude from more serious writing and Woolf intended it to be a joke but  her humour and elegant prose produced a wonderful novella that is partly fact and partly fiction. Critics have found many levels of social commentary and critiques but the lighter side suffices for us. 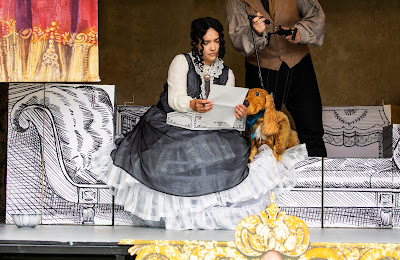 Flush was given to Elizabeth Barrett by Mary Russell Mitford in the 1840’s to provide the bed-ridden poet some companionship. The dog spent several years with Elizabeth, most of the time in her room but with some outings and  adventures. He witnessed the poet Robert Browning’s courtship of Elizabeth with great trepidation. Flush does not understand English but he is very sensitive and intuitive and has a good idea of what is going on. He is jealous of Robert and in fact bites him but is forgiven. He accompanies the couple when they run off to Florence and finds happiness there amidst some difficulties of acculturation.

Carroll has four actors narrate the story and Alexandra Montagnese has created a marvelous a puppet theatre where we see Flush interacting with Elizabeth and Robert. Julie Lumsden represents Elizabeth Barrett, Jonathan Tan represents Robert Browning and Jacqueline Thair plays the Maid. Drew Plummer is the Puppeteer handling Flush as well as being one of the narrators.

The puppet theatre is a small version of the Royal George Theatre stage and we see  Flush as a puppet while the poets and the maid are usually seen only partially, below the neck. The story is narrated and not  acted out although there is some movement.

It is a wonderful story accompanied frequently by rousing classical music. Unfortunately, there were a few issues. The narrators tended to stand in one place as if they were nailed to the floorboards. This is acceptable when there is activity in the puppet theatre but at other times narration may be helped by some movement.

The Brownings and the maid no doubt spoke with an English accent. The actors tried to do an English accent without achieving great success. That is perhaps excusable but Carroll who also directed the production seems not to have paid sufficient attention to volume and enunciation. The story is illustrated by the actors appearing as the poets and the maid in the puppet theatre, but this is a narrated production. We expect the actors to enunciate plainly, be heard clearly and modulate their voices. All these qualities were present but done only adequately. They could have and should have done better.

Bitching aside, Flush is an inspired idea that brings to our attention a wonderful and multi-layered story on the stage and, no doubt, encourages a good read of the original.

Flush adapted by Tim Carroll from the novella by Virginia Woolf continues until October 2, 2021, at the Royal George Theatre, Niagara-on-the-Lake, Ontario. www.shawfest.com.

The Broda Salt Cabin is a first novel set in north-western Greece during the Nazi occupation of 1941 to 1944 and the brutal civil war of 1946 to 1949. In a note about the author, we learn that A. H. Nedani was born in a war-torn Greek village and came to Canada at a young age. The novel, we are told, is based on a true story. Nedani is described as having “a lifelong itch for writing novels” that she satisfied by writing The Broda Salt Cabin.

She had a story to tell and she seems to have plunged into it with relish and an unstoppable urge to let us know all about it. She tells the love stories of Danae, a girl from the mountain village of Broda, in Macedonia, Greece in the late 1930’s during the dictatorship of Ioannis Metaxas. Danae and her friends are arrested for singing in Bulgarian, a language forbidden by the dictator, and she is fined.

Danae is the central character of the novel and we follow her fortunes and misfortunes during the 1940’s and well into the 1950’s when she finally finds a way out. 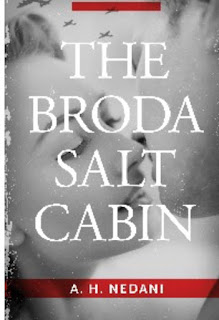 A sampling of the plot. At a wedding, Danae falls in love with a stranger named Nicholas. They know nothing about each other but their love is of such ardour and intensity it is enough to cause spontaneous combustion. He delivers some salt that she is carrying to a cabin near Broda and it becomes the Broda Salt Cabin. It is their cabin and it acquires great symbolic meaning for their love.

Their love affair and marriage occur during the occupation and the rise of the Greek resistance. There is scant resistance to the Germans because the Greeks are divided into the leftist, communist-controlled EAM-ELAS group and the right-wing EDES. Danae and Nicholas despise the communists and suspect them of wanting to give Macedonia to Bulgaria. During their wedding ceremony masked men enter the church and open fire on the guests. The attackers are pro-Bulgarian collaborating with the Germans and hate the Greeks. Danae and Nicholas are patriotic Greeks.

Nicholas falls into the hands of the collaborators and is killed. Nedani mounts a dramatic story about his capture and eventual death from his wounds. The apogee of their relationship occurs during his funeral when Danae jumps into Nicholas’ grave and the pallbearers throw dirt on her seemingly intent on burying her on top of her husband’s coffin.

That is just the beginning. After Nicholas’s death, Danae’s father finds a husband for her in another village and another series of gruesome events follow. Murder, imprisonment, betrayal and all the horrors that evil can devise and humanity perpetrate occur and Danae suffers through them.

The Nazi occupation and the Greek Civil War are not just the background of the horrific events that are described. They are the cause and the impetus for almost all that happens. Evil, treachery, suffering, murder and torture burst out with almost no constraints. There is also love and compassion but it is in short supply.

Nedani gives some of the historical background of her story without pulling any punches. She makes no secret of her hatred of the Communist guerrillas. She describes historical events such as the pivotal meeting between the Greek dictator Ioannis Metaxas and the Italian Ambassador on October 28, 1940, and Churchill’s visit to Athens on Christmas Eve 1944 during the December uprising. Her detailed renderings of these events and others touched upon throughout the novel may be partly imaginary but she is writing dramatic fiction and is not subject to detailed historical fact-checking.

Nedani accumulates dramatic events but she is somewhat skimpy in developing characters. We learn very little about Danae. She is blonde, pretty, shows courage at times, acts foolishly on other occasions but says nothing when her father finds her a husband, a man whom she has never met. At the beginning she appears very gutsy when she stands up to the Judge who is questioning her about singing in Bulgarian, an outlawed language. Danae retorts that Metaxas has outlawed the performance of Antigone, a play that criticizes authority and the reading of the Funeral Oration of Pericles which praises the virtues of Democracy. That may be true but how a teenager from a mountain village who may have gone to public school knows that defies one’s credulity.

Nedani makes some stylistic choices in her writing that may be considered idiosyncratic or, less charitably, infelicitous. In her eagerness to capture the passions, horrors and evils of the time, Nedani has some run-on sentences that I found unnerving. A period or two would have served the narrative and made the paragraph more readable.

In the same vein, she seems to have an antipathy to the use of the personal pronoun and prefers to repeat needlessly and repetitively the name of the person that she is referring to. She refers to the rebel army as “the DSE communist guerrillas” which is true enough but it could be referred to by different and equally accurate names for the sake of variety. DSE is the Greek acronym for Democratic Army of Greece. Some of these infelicities should have been caught by the editor but were unfortunately left in.

The experiences of World War II and especially the Greek Civil War are etched into the Greek consciousness and their memory is passed from generation to generation. They were told by the participants and then by their offspring as if they happened yesterday.  Nedani seems to be one of the heirs to those awful times who needed to expiate her borrowed memories.

As for Danae, we read of her life in the 1950’s with its many reversals but she survives it all. She finally finds the gates of salvation open in a way that thousands of Greeks will recognize. The route led across the Atlantic to Pier 21 at Halifax, Nova Scotia and a long train ride to Toronto’s Union Station. A surprise awaits there but you will have to read the novel to find out what it entails.

And finally, may I add that The Broda Salt Cabin won the Canada Book Award.

Posted by James Karas at 9:42 PM No comments: