What would you have opposed to you - the Pope or a pandemic? You are not likely to have both against you at the same time. But if you were in the business of producing operas in 1708 or 2021, you were fated to meet one of them. The 23-year George Frideric Handel  composed The Resurrection, a sacred drama, and planned to have it produced on Easter Sunday and Monday 1708 for obvious reasons considering the title of the work.

The Pope said no because producing a work for the theatre, even a sacred piece, during Lent or Easter was a no-no. When you have a problem, you can curse Fate or look for a solution. In 1708 the solution was provided by the Marquis Francesco Ruspoli and the oratorio was produced in his palace in Rome.

Skip more than three centuries and you have Opera Atelier wanting to produce The Resurrection in Toronto. In 2021 there is no Pope to put a kibosh on the plans of Atelier’s Co-artistic Directors Marshall Pynkoski and Jeannette Lajeunesse Zingg, to produce an oratorio but Covid-19 can and does. But just as Handel found a solution in 1708, Opera Atelier found a solution and produced the work in 2021 and  has made it available for all to stream in their homes. 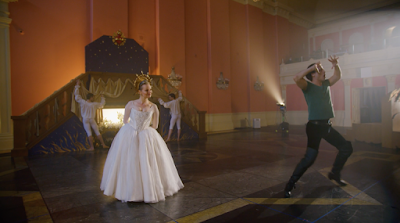 The action was filmed in the Ballroom of the St. Lawrence Hall and the audio was recorded in Koerner Hall, Toronto. The result is a splendid rendition of an infrequently seen work with superb singing enhanced by a marvelous ballet choreographed by Ms Lajeunesse Zingg and performed by the Artists of Atelier Ballet.

After the death of Christ, an Angel demands from Lucifer the opening of the gates of hell in anticipation of His resurrection and conquest of death. After that The Resurrection is faithful to its title and tells the story of Mary Magdalen’s and Mary Cleophas’s mourning for the death of Christ and the reassurance of St. John that He will rise. The duel with Lucifer continues but he is soundly defeated and sent back to hell while the women reach the empty tomb and the chorus sings the gorgeous “Let praises sound on Heaven and Earth.”

The Resurrection may well have one of the most captivating and rapturous opening arias. The Angel sung incomparably by soprano Carla Huhtanen demands from Lucifer to open the gates of hell and let in the radiance of God. The aria sounds as difficult to sing as it is beautiful. Huhtanen manages all the scales and all the demands of the role with the utmost agility and mesmerizing beauty.

Meghan Lindsay is the grieving Magdalene and Allyson McHardy as Cleophas is her comforting companion and both display vocal virtuosity and emotional depth as they go from the depths of mourning to religious ecstasy. Tenor Colin Ainsworth sang a superb St. John. He displayed reverence and assurance as the man who knew of the coming of the Resurrection. Bass-baritone Douglas Williams has the role of Lucifer. I am not sure about his ability to handle the vocal requirements of a baroque piece. He has done well in Mozart roles but his voice seemed to lack the suppleness to do Lucifer.

The choreography was stunning as we have come to expect. The men and women are all dressed in white (they are on the side of the good guys) and armed with swords in the opening. They are fighting for the opening of the gates of Hell. In accordance with Covid-19 restrictions they wore masks but it is of no moment.

The women have beautiful modern gowns and there is no attempt to give a first century impression. Lucifer wears a green T-shirt and boots.

The lighting in St. Lawrence Hall seemed choppy, foggy at times, dark on occasion and I am not sure if it was light from the windows that caused the apparent problem.

I found the production outstanding and thoroughly enjoyable. The advantage of streaming is that you can watch it more than once. I watched it several times.

The Resurrection by George Frideric Handel to a libretto by Carlo Sigismondo Capece, directed by Marshall Pynkoski is being streamed for viewing until June 10, 2021. For more information go to: https://www.operaatelier.com/season-and-tickets/2020-2021-season/handel-the-resurrection-opera-atelier

Posted by James Karas at 1:50 AM No comments: