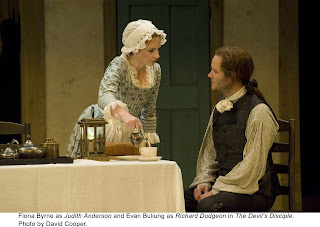 The playwright who lends his name to the Shaw Festival in Niagara-on-the-Lake gets only two of his plays produced there this year. That’s not quite 20% of the eleven productions. The two Bernard Shaw plays are The Devil’s Disciple at the Festival Theatre and In Good King Charles Golden Days at the Royal George Theatre.

Shaw described The Devil’s Disciple as a melodrama in three acts. There are melodramatic elements in the play but one should never take Shaw at his word and expect a conventional potboiler.

The play takes place in 1777 in New Hampshire during the American Revolution. Dick Dudgeon (Evan Buliung), an unorthodox character and the devil’s disciple, finds himself in the house of The Reverend Anthony Anderson (Peter Krantz) when British soldiers come to arrest the latter. Dudgeon pretends to be Anderson and he kisses the latter’s pretty wife Judith (Fiona Byrne) as he is led away to be hanged by the British. Dudgeon is tried by General Burgoyne (Jim Mezon) and Major Swindon (Peter Millard) and he escapes hanging.

The first two acts are incredibly ineffectual. The play and the production seem to creak and it is hard to say where the fault lies. Is the play that bad or is director Tadeusz Bradecki not able to bring out its strengths? Bradecki opens the play with the supposedly startling image of a man being hanged, something that Shaw did not think of. Even that does not work.

The final act is the trial of Dudgeon by Major Swindon and General Burgoyne. Jim Mezon does a very good job as Burgoyne as does Millard as Swindon. Shaw has fun taking swipes at British aristocracy, arrogance and incompetence and the audience joins in. There is Shavian wit and wisdom and the pace picks up.

Bradecki takes some liberties with the text going so far as to add a few lines about Butlersburg becoming Niagara-on-the-Lake, something not mentioned by Shaw. This does produce a laugh but surely it is an unnecessary interpolation but some people may consider it a clever way of reaching out to the audience and making the play relate to them. After all, 300,000 loyalists did come to Canada after the American Revolution and they were the ones who started Niagara-on-the-Lake.

A production that can be summed up as one third good and two-thirds so-so is not what one expects from the Shaw Festival.

The Canadian content of the Festival is Michel Tremblay’s Albertine in Five Times at the Court House Theatre.

When the lights go on we see five women. The oldest will sit centre-stage and the other four will sit around her. The five actors represent one woman, Albertine, at the age of 30, 40, 50, 60 and 70. Her sister Madeline will also appear and will talk with her sister. The five actors will talk with each other but we know of course that they represent one person and whatever each actor says represents the memories or experiences of Albertine.

It is a brilliant device. Representing a single working-class woman over five decades of her life simultaneously is an inspired idea. I don’t think the execution is as successful as the inspiration but it is a play that makes you stop and take notice.

Albertine at 70 (Patricia Hamilton) has just returned home from the hospital and she muses that she will be better off there. She appears calm, at peace with herself in old age.

We learn that Albertine, the waitress and mother from the working class district of Duhamel had two children, Therese and Marcel. Therese misbehaved and at age 11 was allowed a paedophile to molest her. Albertine at 30 beat Therese to a pulp and apparently did not shed a tear about it. Regret and guilt if not tears come later and she has to live with the memory of her action. At different stages of her life she tries to forget, resign herself to her fate or take drugs. It amounts to a tragic life over five decades that are spread out before us.

Madeleine (Nicola Correia-Damude) provides a counterbalance to Albertine. Not all men are monsters, she says, and she is able to find love or is at least able to cope better than her sister.

Unfortunately the play is not always clear or easy to follow. Albertine at 70 can look back on her life, remember her past and have a dialogue with herself at different stages of her life. Albertine at 30 can have little to say to Albertine at 60, though she can correct lapses of memory, I suppose. Madeline died before Albertine reached 70 and yet she is on the stage talking with her. This is not a play that one can digest on one viewing.

Albertine at 30 is played by Marla McLean, at 40 by Jenny L. Wright, at 50 by Mary Haney and at 60 by Wendy Thatcher, doing good work in rather static roles. The play is directed by Micheline Chevrier.

In the end you end up being fascinated by the idea of the play and your attention is riveted but the fascination falls short of making this an enjoyable production. The play and the production fail to cross the thin line of “that was interesting” to that was a great evening at the theatre.
Posted by James Karas at 2:45 PM No comments: