THE MAGIC FLUTE - REVIEW OF STREAMING OF PARIS OPERA PRODUCTION

The Magic Flute was the brainchild of Emanuel Schikaneder, an extraordinarily talented man of popular theatre in Vienne in the latter half of the 18th century. That happens to coincide with the life of Mozart and Schikaneder wanted to put together a money-making singspiel based on his libretto for his Theatre auf der Wieden in a suburb of Vienna.

The opera with singing and spoken dialogue had other contributors to the libretto including fairy tales and a healthy dose of the philosophy of freemasonry. The Magic Flute opened on September 30, 1791 and was a big hit. It would almost certainly have joined the countless other hits of the era on the dusty shelves or dustbins of history were it not for the magical music composed by Mozart.

Some 230 years later, the Paris Opera has produced the work in an empty Opéra Bastille trying to observe some Covid-19 protocols. The effects of the disease are everywhere, and the news delivers frightful numbers of infections and deaths. Director Robert Carsen’s 2014 production zeroed in on the idea of death in general and in the opera in particular and it inadvertently takes full cognizance of what is happening during the current pandemic. The idea and the reality of the death of millions of people is all around and a more appropriate production can hardly be found. 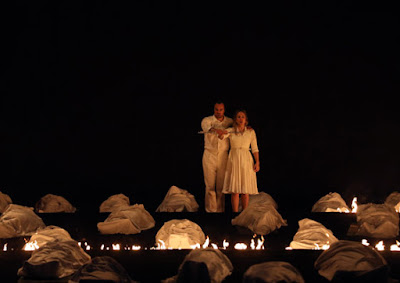 In the opening scene our hero Tamino collapses near some mounds in the clearing of the forest. The mounds will turn out to be graves. The nasty Monostatos who will try to rape the lovely Pamina is a gravedigger. Graves will appear several times in the production as will a human skeleton and a skull. No one will miss the reference to the gravediggers’ scene from Hamlet when a skull is greeted with the words “Alas, Poor Yorick!” The appearance of coffins, black costumes and funereal veils will impress on us the idea of death.

Carsen uses modern costumes almost entirely black or white in conjunction with death as well as the moral lessons of the opera. The Magic Flute is a morality tale. Light, white, love, virtue, truth, and good are posed against darkness, black, hatred, vice, lies and evil. That is what fairy tales tell us and the freemasons, we suppose, stand for.

In the background we have the projection of a green forest. Its colours will change to brown, snow-covered white and barren to indicate the passage of time and the change of the seasons.

An aggressive morality tale amidst graves and coffins could be a fail-poof formula to keep people away from a production even during a lockdown. This production is nothing of the kind. It stands as an interesting view of the opera and a sheer pleasure to watch and hear.

The cast may not be from the top tier of singers, but their performance is superb. Tenor Cyrille Dubois is the heroic Tamino and he does a fine job in the role. He pursues the lovely Pamina, sung by soprano Julie Fuchs with a delicious voice and youthful ardour.

The comic relief is provided by the agile and irreverent Papageno of bass-baritone Alex Esposito who has made a career of singing comic character roles and he makes it perfectly obvious why in this performance.

Soprano Nina Minasyan is the Queen of the Night and she handles the regal rage and leaps across the two octaves of her mainstay aria. Sarastro (bass Nicolas Testé) is her opposite as the symbol of love and wisdom that he displays with sonorous beauty in his fine arias "O Isis und Osiris" and ‘In diesen heil'gen Hallen.”

The grave-digging, shovel-carrying and would-be rapist Monostatos is in the hands of Wolfgang Ablinger-Sperrhacke. Carsen does not overdo him because someone who tries to rape a woman does not need to be exaggerated.

The orchestra and chorus of the Paris National Opera were conducted by Cornelius Meister.

Performing to an empty house during a pandemic has definite drawbacks. All involved, including the orchestra try to wear masks. That works for the strings, but the wind instrument players can’t very well blow in a flute. The chorus wears masks and sings with gusto. I could not tell if they were pre-recorded or if they managed to sound that good with their mouths covered. The main singers did not wear masks and social distancing was not exactly adhered to.

Whether you absorb the masonic virtues of strength, goodness, veracity, love and wisdom is up to you. You should enjoy this production done under difficult circumstanced, regardless of your moral standards.

The Magic Flute by Wolfgang Amadeus Mozart is streamed by the Opéra national de Paris until February 22, 2021 with some cast changes. For more information visit: https://chezsoi.operadeparis.fr/products/the-magic-flute or  https://www.operadeparis.fr/

Posted by James Karas at 3:54 PM No comments:

THE GLASS MENAGERIE – REVIEW OF NATIONAL THEATRE OF GREECE PRODUCTION

How do you produce a great play under Covid-19 strict social distancing conditions? How well can you do with a production that will be performed only once, without an audience and streamed live around the world in Greek?

The play is Tennessee Williams’ The Glass Menagerie (Ο Γυάλινος Κόσμος) which was produced by the National Theatre of Greece on January 23, 2021 precisely as described above. It was a stunning production and interpretation of the play that deserves a much greater audience than could be garnered by one broadcast.

A lion’s share of the credit must go to director Giorgos Nanouris for his brilliant and imaginative approach to the play and his compliance with distancing requirements that took nothing away from the power of the play. He and set designer Mary Tagari have the play performed on a stage that has a kitchen table and a sofa well apart. Nothing else. 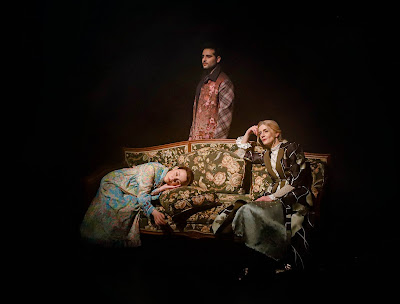 The all-important glass menagerie, the collection of delicate figurines that constitute Laura’s world are represented by a chandelier with delicate-looking bulbs. The chandelier is lowered to head level and raised as required and it works extremely well. Having Laura play with small figurines would have required a breach of social distancing and the solution seems simply inspired. The background is entirely black with a white smoke visible now and then. It is a dream play and again the indication provided by the background is appropriate and superb.

The action of the play is what Tom remembers about life with his mother Amanda, his disabled sister Laura and a visitor Jim in Mississippi in the 1930’s. All the characters have an alternate universe, a memory of another  world that did not or does not exist. A production needs to capture those worlds, take us through the lives of the characters to the devastating and tragic end.

Konstantinos Babis gives us an angry, troubled and desperate Tom stuck in a dead-end job with an unbearable mother and a troubled sister. He writes poetry on his job in a shoe warehouse and goes to the movies to find escape and solace. Babis makes us feel his anger and his desperation and  we share his guilt about leaving his sister behind.

The mother, Amanda (Anna Moscha), is just as desperate and frustrated as Tom. She is garrulous, annoying and unable to see beyond her own unhappiness. Her alternate world is her imaginary youth. She considers herself a former Southern belle, a beautiful, aristocratic woman who was visited by numerous high-class suitors. She chose a loser. Moscha gives us a marvelous portrayal of this pathetic woman who does love her children but cannot grasp reality or dispose of her dream world.

The glass menagerie is Laura’s (Lena Papaligoura) other world. Her physical defect, a foot that makes her limp, has caused psychological injury to the extent that she is almost incapable of living in the real world. She is as delicate as the figurines (in this production the lightbulbs) that she loves and when one of them is broken she cries inconsolably. It is an extraordinarily moving scene. In Jim, the gentleman visitor that her brother brings as a possible suitor, she meets someone that she knew and had a crush on in high school. He manages to bring her out – dance with her and kiss her – and then tells her he is engaged. (The kiss is indicated by clever use of shadows.) He destroys her. A moving and beautifully nuanced performance of a tough role.

Anastasis Roilos plays Jim. He is a young man full of confidence, great dreams and a bright future. Maybe. He was a popular high school student who showed  great promise – he could have become president before thirty, he thought. He fizzed out and ended up working in a shoe warehouse with Tom. All that is left is his glorious past, his terrible present and his dreams for the future. He has a lot in common with the other characters in the play. Roilos exudes Jim’s confidence and humanity impeccably.

The National Theatre of Greece has had is ups and downs since its inception in 1890 including disappearing for decades. That is in the past and now it is recognized as a major cultural organization. Its forays abroad have been severely curtailed, but streaming should offer opportunities for gaining a worldwide audience. It should aim for more than Greeks of the diaspora and having subtitles in English and other languages is a must. Let us hope they will pick up the torch.

The Glass Menagerie by Tennessee Williams was streamed on January 30, 2021 live from the Nikos Kourkoulos stage of the  Ziller Building,  Athens, Greece. For more information visit: www.n-t.gr