The National Theatre of Greece has scored a coup by streaming Aeschylus’s Persians directly from the Ancient Theatre of Epidaurus. This the first time that this has been done and the laudable production deserves to be followed with more opportunities for people around the world to see ancient and modern Greek drama.

Persians has many aspects that are unique to the play and it presents almost insurmountable obstacles for a modern director and actors as well as for the audience. It is the earliest extant play from the handful of works of Ancient Greek drama that have survived. It was produced in 472 B.C. and deals with a historical event, the defeat of the Persians at the battle of Salamis in 480 B.C., a battle in which Aeschylus took part. Most other plays dealt with mythical subjects.

At its simplest, the plot deals with Persian elders (the Chorus) and Queen Atossa, the wife of the dead King Darius, learning from a Messenger of the colossal defeat of their great army. Xerxes had amassed a colossal force to subjugate the Greek city states and Athens in particular. It was a commensurately colossal defeat for the Persians and a victory for civilization. 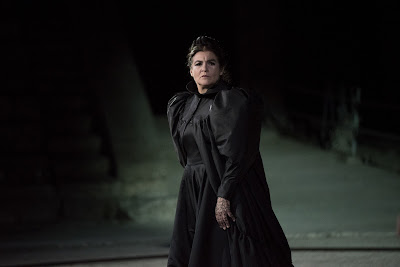 Lydia Koniordou as Atossa. Photo: Marialena Anastasiadou
The Ghost of Darius also appears in the play as well as the dishevelled and desperately defeated Xerxes.

Dimitris Lignadis, the Artistic Director of the National Theatre of Greece, directs the production and is the one who must find a way of presenting a play to a modern audience even though we know very little about how it was done twenty-five hundred years ago.

The Chorus plays a key part in the play and it is the hardest aspect to deal with. We know that in Ancient Greece they spoke (through the Chorus Leader or in unison), chanted, sang and danced. In Lignadis’s production, they do all of those things to some extent. They wear white shirts with Greek writing on them (I could not figure out what) and skirts. They used long sticks resembling spears for some of their movements. Choreographer Konstantinos Rigos has created simple but effective movements for them with music by Giorgos Poulios.

Aeschylus used various meters for the Chorus which are impossible to reproduce for us and it is one of the losses that we must accept. We are treated to the recitation of a few lines in the original Greek which resonated with the modern audience and evoked applause. 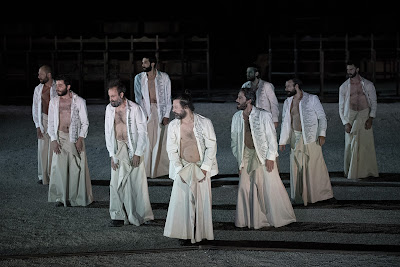 The Chorus. Photo: Marialena Anastasiadou
Queen Atossa is the main person in the play as the grand widow of Darius. Lydia Koniordou, dressed in a black gown, evokes shock, grief and fundamental tragedy as she realizes the extent of the Persian defeat and its meaning as the end of an empire and her world. A bravura performance by a great classical actress.

The Ghost of Darius comes from the underworld to witness the effect of hubris and the resulting Persian catastrophe. He (Aeschylus, of course) warns against overweening arrogance and cautions the victorious Athenians as much as he mourns the fate of his empire. A superb performance by Nikos Karathanos.

Argyris Pandazaras has the tough and thankless job of the Messenger who must disclose in great detail the awful result of the great expedition.

Argyris Xafis gives a fine performance as the blood-spattered and utterly humiliated Xerxes who appears at the end of the play.

As I said it is a laudable production, but it was not without glitches. There were problems with the audio which was interrupted a number of times. I am not certain, but it looked as if the actors’ spoken lines were pre-recorded and it was impossible to synchronize the lip-movements with what we heard. These are technical problems that may well be fixed if there will be futures transmissions.

Transmission of theatre and opera performances from numerous venues have become the norm. Let’s hope that Greece will pick up the habit and make Greek drama, both ancient and modern, more familiar to all of us.
____________________
Persians by Aeschylus in a translation by Theodoros Stephanopoulos was performed on July 24, 25 and 26, 2020 at the Ancient Theatre of Epidaurus, Greece.  It was streamed live on July 26, 2020 and is now touring around Greece. For more information visit:   www.greekfestival.gr

James Karas is the Senior Editor - Culture of The Greek Press.
This review will appear in the newspaper.
Posted by James Karas at 11:29 PM No comments: