MEDEA STREAMED FROM THE NATIONAL THEATRE OF GREECE

In 431 BC Euripides submitted Medea as part of a trilogy to compete for what we may classify as the ancient Olympics of Drama. His competitors were Sophocles and Euphorion (the son of Aeschylus). Euphorion came in first, Sophocles, second and Euripides third. Medea is the only surviving play from that year’s competition.

Undaunted by the pandemic, the National Theatre of Greece has streamed a production of the play to be viewed around the world live on January 10, 2021. The production may more accurately be described as a recital of the play due to the severe restrictions imposed to fight the virus that is ravaging the world.

The recital is produced by the newly formed Classical Drama Research Theatre of the National Theatre. It is directed by Martha Frintzila who also plays Medea.  There are two other actors (Andreas Konstantinou and Thanos Tokakis) who play all the other roles, including the Chorus of Corinthian Women. There are three musicians on stage (Panagiotis Manouilidis, Vasilis Mantzoukis and Nikos Papaioannou who play various instruments and sing/recite some lines. 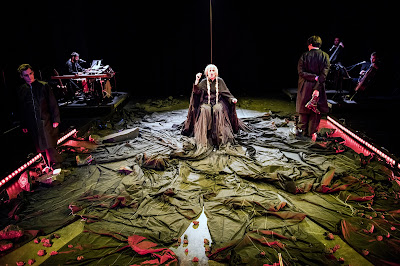 A recital has its drawbacks. It may uncharitably be described as boxing with one hand tied behind your back. But there are many recitals especially of operas and a good boxer can do a lot and Frintzila does. There is very little movement during the performance for Covid-19 related reasons.  Medea is seated on a raised area draped in black coverlets and dressed in black. In fact, everything in the small playing area is aggressively black including the ubiquitous rocks strewn on the stage.

The two actors playing all the characters accords with what Athenians saw in 431 BC. The Chorus is the exception, of course. The actors would have worn different masks for each character. In this production there were no masks and at times it was hard to distinguish which character they represented.

Frintzila takes liberties with the text, as do most directors, but she transposes some of Medea’s lines to the two actors. One of the most dramatic scenes in the play is Medea’s heart wrenching farewell to her children in Episode 5. She is bent on revenge but her resolve almost falters when she is about to send her children to their death. I cannot understand the reason for the transposition of lines in a pivotal scene. Frintzila has a beautiful, resonant voice and she should be heard reciting all her lines. Some of the choral odes are recited by the musicians.

The black-clad Frintzila with braided hair looks regal and commanding. She recites her lines meticulously and expressively. She is almost static almost throughout the play until the end when she unbraids her hair, sheds some of her clothes and throws her arms in the air and does modified dance movements of triumph.

Konstantinou and Tokakis move around the playing area, lie down and recite most of the lines of the play with some help from the musicians.

The music, with some exceptions, has Eastern tones, almost invariably dramatic, played by 2 double basses, percussion, a guitar, and a keyboard.

The English title of the production is given as Medea’s Son(g)s with appropriate references to the children and the operatic provenance of the play.

The streaming was advertised as having English subtitles. It may well be my severely limited technical competence, but I was unable to find them.

Despite the obvious limitations that are not the fault of the director or the cast, this was a highly creditable production of a complex play. We saw Aeschylus’s’ Persians last July streamed from Epidaurus and one hopes that this will become a frequent habit.

At the premiere of Medea at dawn in the spring of 431 BC about 15,000 Athenians saw the play in the Theatre of Dionysus. The streaming was viewed by about 1300. The National Theatre has a world to conquer live or through streaming. We can’t wait.

Medea by Euripides was streamed live by the National Theatre of Greece on January 10, 2021. https://www.n-t.gr/

James Karas is the Senior Editor - Culture of The Greek Press. This review appeared first in the newspaper.

Posted by James Karas at 5:29 PM No comments: