THE THREE SISTERS – REVIEW OF STREAMING OF GREEK PRODUCTION

Anton Chekhov’s The Three Sisters is a subtle and complex play that demands the highest  production values and acting talent from any company that dares produce it. Poreia Theatre of Athens, Greece produced the play and recorded it for streaming. This review is of the streamed version. Dimitris Tarloou has directed and, with Eri Kourgia,  dramaturged, the play in a creditable production that deserves praise and a few complaints.

The Three Sisters tells the story of the daughters of General Prozorov who died one year before the opening scene of the play. The young women moved to a provincial town eleven years ago when their father was appointed commander of the local artillery unit. The provincial town has proven to be a deadly place, a social bore. a destroyer of souls and a place that one wants to escape from. The three sisters dream of returning to Moscow and share pleasant memories of life in the capital as their situation in the provincial city deteriorates. 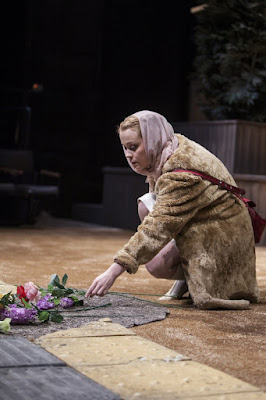 The production is done in modern costumes and Tarloou has made The Three Sisters a contemporary Greek play. There is some singing in the play and the characters sing snippets of popular Greek songs. The toast that two men make is with tsipouro, a popular hard liquor usually associated with Greek peasants who tended to distil it themselves.

The set is unrealistic with the most prominent feature being some rows of seats in front of the main playing area. It looks like an audience that watches the play, but members of the cast sit there and they walk onto the main stage when their turn comes up. It is an interesting touch that may be characterized as Brechtian. At the back of the set there is what Chekhov describes as a drawing room of a well-off family that has a large table. The rest of the set is sparsely decorated and a piano is prominently visible. One of the daughters was a piano player.

We also see at the corner of the screen two musicians, a clarinet player and a trombone player. The play does call for some music but I don’t recall the need for the latter two. Be that as it may, the two musicians are put to much use. Frequently they play during the dialogue and at about the same volume. The music they play is undistinguishable largely because it interfered with the dialogue and I found it, to put it politely, annoying. We see the musicians walk across the back of the stage and at one point other instrumentalists join them to form a band. No doubt, the director had something in mind by providing us with the musicians and their music, but unfortunately, the reason escaped me.

Alexandra Aidini plays the oldest sister Olga as a decent person, a teacher who is not married and is solicitous of the welfare of the old servant Anfisa (Marietta Sgourdaiou).The ill-tempered middle sister Maria or Masha is played by Ioanna Pappa. She is married to Kulygin but is unfaithful to him with Vershinin. The youngest sister Irina (Lena Papaligoura) at 20 is a bit immature and dreams intensely of returning to Moscow, a place of happy memories. She marries Baron Tuzenbach and the marriage does not go well.

Laertis Malkotsis plays their brother Andreas (Andrey in Russian) as man who has ambitions of becoming a professor at a Moscow university but he marries the despicable Natalia and settles for a job as secretary to the town council. He is a serious gambler who accumulates huge debts, is treated like the village idiot and has an evil wife who is having an affair with the President of the Town Council.

Andreas’s wife Natalia deserves special mention. Played by Marianna Dimitriou, she is petty, vengeful, destructive, cruel, shallow and disgusting. She starts as a country bumpkin not knowing how to dress and is the target of ridicule. By the end of the play, she has gained complete control of the house and driven the sisters out and her husband into abject submission. And of course, she is an adulterer whose second child may well be by her substitute husband.

The siblings live in a provincial town with dreams of escaping. The women smoke, dress well, at least reasonably well, and are attractive. Their disillusionment is at the core of their existence and it is this that the actors exude so masterfully in their performances.

The men share some of those traits but they try to be more optimistic or philosophical. Lieut. Col. Vershinin replaced the sisters’ father as commander of the army unit and knows them from their childhood. He is a direct connection to their memories and dreams of Moscow. Giannis Dalianis gives an exceptional performance as the philosopher officer, unhappy husband, lover of Masha and an optimist for civilization.

Chebutykin is an old, pathetic army doctor who has forgotten what he knew about medicine, gets drunk and finds peace in believing in nothing, Giorgos Biniaris takes advantage of the acting opportunities provided by this eccentric character.

Baron Tuzenbach  (Pantelis Dentakis and  Captain Solyony (Dimitris Bitos) are officers who bicker and in the end duel with one of them being unsuccessful.

The play has more than a dozen characters to present Chekhov’s subtle and complex vision of Russian society at  the turn of the twentieth century. Tarloou’s adaptation and transfer of that vision to modern Greece is imaginative and, in some respects, brilliant. But it has the inherent problem of such adaptations and chronological shifts. His fine directing of a superb cast allows us to suspend our disbelief and holds our attention and even if we know that a provincial town in 21st century Greece is a long way from 19th century Russia, we appreciate the production.

The Three Sisters by Anton Chekhov, adapted by Dimitris Tarloou and Eri Kourgia, in a production Poreia Theatre,  Athens, Greece was streamed on demand by www.poreiatheatre.com

Posted by James Karas at 6:38 PM No comments:

Coffee Reading is a first novel by Eleni Karipidis that is centred on the ancient practice of predicting the future by examining the mud left at the bottom of a Greek coffee cup. After the coffee is drunk, the cup is turned over and the lines, blots and images are formed on the sides and the bottom. The coffee reader, a person who has the gift of interpreting them can foretell the future. The craft, as Ms Karipidis calls it, is well known in Greece but I am not sure how many non-Greeks are aware of it or practice it in North America.

The novel has three interwoven plot lines each narrated in the first person by three story tellers. Cassie, the first, is a fifteen-year-old who acquires the gist of coffee reading from her grandmother and she examines the coffee cup of Penelope. We meet her several times during the story.

Penelope is a beautiful girl, gifted with blessed hands in the making of pitas, who has ambitions beyond her peasant background. She consults coffee readers to learn about her future. She is waiting to find the right man but she is unsuccessful because she is very picky. Her coffee cup indicates that she will go on a long journey and her path is clear. 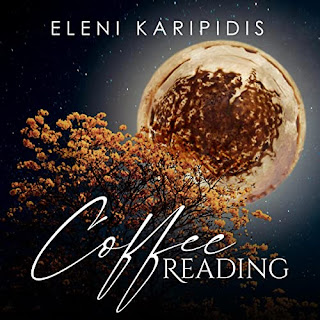 Penelope comes from an unpleasantly patriarchal family that runs an orchard. She has an uncouth father and brothers, Aris and Apollo, and wants to get out of that milieu. She visits the mysterious coffee reader, Madame Vivi, at her mansion on top of a hill. She predicts that Penelope will receive a visitor but can give few other details. Madame Vivi has predicted better things for Penelope and even though her mother warns her against relying too much on a coffee cup reader, Penelope is convinced that she is made for a life much better than farm living.

The frustrated and ambitious Penelope puts a note on a peach branch that reads: “American husband wanted” and gives her complete address. An American shows up at her house, but he is rejected by her family. Candidates for her hand come to her house but only one of them, Alexander or Mr. Blue Eyes, stands out. The two are attracted to each other.

Madame Vivi reads Penelope’s coffee and tells her that Alexander is no good. Penelope sees him as her ticket to a good life. It looks like Penelope will marry Alexander. Her father who supplements his income as a tailor, is busy making a suit for Alexander’s father with wads of money sewn in the lining. What he is doing is criminal but only if one gets caught, he surmises. In any event Penelope and Alexander go to the chapel to get married. Spoiler alert. You may see signs of the movie The Graduate, perhaps in reverse, but I will say no more.

The story telling is interspersed among the three tellers. The third plot strand is narrated by Lysander. He is a disaffected young man living in Greece in 1967 under the harsh dictatorship of the Junta (which forms a backdrop for the story) with his friends Socrates and Pericles. The three want to leave Greece and go somewhere. But where? One of them has an uncle in Canada and they reach for a globe to locate Canada and Toronto and thus choose it as their destination.

Before they leave, the three friends make their way to Madame Vivi’s mansion to have their coffee read. On the way they see a beautiful girl who looks like a forest nymph. Her handkerchief gets snagged by a tree branch and Lysander manages to grab it. It has the letter P embroidered on it. On reading Lysander’s coffee Madame Vivi sees the letter P in his cup.

As foretold by Cassie, Lysander, Pericles and Socrates do arrive in Toronto with $5 among them. Lysander stays for 10 disastrous months there before returning to Greece.

That is the skeleton around which Ms Karipidis constructs her story. If there is a love story between Penelope and Lysander, it is entirely inchoate. That plot strand and many others are left dangling in the wind. What happened at the marriage chapel? What is happening to Penelope? Very little in the novel complies with the basic idea of having a beginning, a middle and an end. Perhaps Ms Karipidis dangles plot lines in front of us to whet our appetite for more development in future volumes. Perhaps.

As for the three young men, we know almost nothing about them except that they have already served in the Greek army and we are forced to deduce that they may not be educated at all or are perhaps not very bright. They never heard of Canada even though one of the has an uncle there?  Character development is kept to a minimum.

They address each other as Ly, Soc and Perry. Penelope becomes Penny. It may be appropriate and perhaps inevitable for people in Canada to use such short forms but shortening Lysander to Ly in Greece by people who speak no English? Unlikely.

There are many people who believe in fortune telling, astrology, tea leaves reading, seances and coffee reading. Ms Karipidis has stated that she has the gift of coffee reading but her views may be considered irrelevant in the work of fiction that she has written. Her characters believe in the craft assiduously.

I have gleaned a few fascinating facts about the author from the internet. She was a teacher for the York Region Bord of Education for twenty years. She was awarded 1st Prize at the Karolos Koon Theatre Academy in Athens in 1992 and studied at the University of Windsor, Concordia University and Ryerson University among other institutions.

For the rest, you will have to read her book.

Posted by James Karas at 2:38 PM No comments: