Director Tonia Mishiali’s Pause is the second Greek-language movie streamed by the 2020 European Union Film Festival. It Cyprus’s contribution the the Festival.

Pause is a sensitive, moving and almost relentless study of a woman at the end of her rope. We meet Elpida (Stella Fyrogeni) in a doctor’s office with her legs up on stirrups   being examined. The doctor (Marios Ioannou) recites some of the symptoms of menopause some of which are memory lapses, mood disorders, vaginal dryness, loss of sexual desire and perhaps some others. Elpida may be too young for menopause and the movie indicates that if she has any of these ailments they are not from menopause.

Elpida is disheveled, her hair is a mess, she wears no makeup and her face expresses misery, anxiety, pain, hopelessness and the image of a woman on the verge.

Mishiali takes us through Elpida’s ordinary, daily routines, such as shopping at the supermarket, cooking, doing laundry and looking after her husband Costas (Andreas Vasileiou.). We get a closeup of her existence with him who is an ape and that may be an insult to those fine mammals. We usually see him eating or more accurately stuffing his face, snoring and being a jerk. He speaks very little and the only time he shows any affection is when he addresses his parrot.

Elpida wants to colour her hair, get a computer or have money for gas. The answers to all these requests are negative and insulting. He even sells her jalopy of a car leaving her with no choice but to walk everywhere including the supermarket.

Elpida seeks an escape from the prison. She finds a “lover,” a house painter named Andrey (Andrey Pilipenko). She takes up some painting and attempts to run away. She gets dressed up, packs a suitcase and confidently walks away. But she returns. When Costas becomes unbearably obnoxious, she tosses a plate of food in his face. She goes out with her friend Eleftheria (Popi Avraam) and has fun at a disco.

The issue here is which, if any, of these events are real as opposed to illusions borne out of her desperation?

Mishiali gives us some hints but mostly she wants us to figure things out for ourselves. The day after she meets the painter, she finds a hickey on her neck and covers it up with makeup. We can assume that Andrey did it. But there is a subsequent car trip with him, and we may be certain that she is just imagining it?

For her outing to the disco with the appropriately named Eleftheria, Elpida puts on makeup, they drink and sing and find a few moments of happiness. Reality or illusion?

Mishiali in her expert directing provides few exterior scenes and the background is frequently blurry. There is no sense of location in the film except for the interior of Elpida’s mind. That is the only scene that counts. Her condition deteriorates throughout the 96 minutes of the film with the possible exception of the respite provided by her imagination or the reality of her relationship with the painter and her friend Eleftheria.

Eleftheria by contrast is vivacious, outgoing and a woman with guts. She prayed for her husband’s penis to dry up and for him to die. And guess what? Her prayers were answered, she tells us with glee. Elpida’s facial expression conveys the utter misery of a woman, of all women, trapped in hellish marriages. There are escape hatches and we watch as Elpida tries to find one for herself. In the end she leaves us with an extended gale of mysterious laughter.

Mishiali, who also wrote the screenplay, wants us to see the physically and emotionally cramped apartment, the blurry surrounding world and the expression on Elpida’s face and soul. It is a masterful approach which evokes a superb performance from Fyrogeni and the supporting cast.

Pause, written and directed by Tonia Mishiali, was streamed on November 19 and 20, 2020 as part of the European Union Film Festival. For more information see: www.euffto.com

James Karas is the Senior Editor - Culture of The Greek Press. This review appeared first in the newspaper

Posted by James Karas at 5:36 PM No comments:

The European Union Film Festival is an annual event in Toronto featuring, as its name indicates movies from EU member countries. The 2020 Festival had to take account of the pandemic and it has smartly gone online by streaming 27 films across Canada. Greece is represented by Defunct, a film by Zacharias Mavroeidis and Cyprus by Pause, a film written and directed by Tonia Mishiali. Like all EUFF films, they are shown in the original language with English subtitles.

Defunct (Ο Απόστρατος) is set in the Athens suburb of Papagou and is centered on the life of Aris. He is a young man with serious financial problems who has dreams of making it. He returns to his grandfather’s vacant house in Papagou from the upscale area of Glyfada and runs a “big business” of importing expresso machines from Italy. He has traveled widely and may settle somewhere, maybe Paris or London. All of this is illusion or poppycock as he tries to sell a single expresso machine or make a big sale to the army. 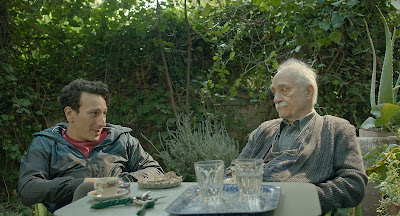 Mavroeidis’s script includes several plotlines and examines themes of love, friendship, honor, loyalty and betrayal. Aris’s story takes place in 2012 but the plot takes us back to the Greek resistance in World War II, the Greek Civil War (1946-1949) and subsequent events.

The other main character of the film is someone we never see. It is Aristides, Aris’s grandfather, who was an army officer and had a good friend, Vassos (Thanasis Papageorgiou). Vassos and Aristides were close friends since childhood, but their relationship became complex during the war.

Mavroeidis reveals the complexity of the relationship of the two friends but does not take sides and leaves us to decide about what is the truth and who is telling the truth. Aristides rose only to major and was forced into retirement early. His family believes it was Vassos’s fault. Vassos was accused of being a leftist and Aristides was ordered to arrest him and deliver him to the authorities. Vassos spent years in prison islands. Thirty years later, Aristides bought a house for him near his own. Why? Was the major fearful of blackmail or was he repenting for what he did to his friend during the Civil War?

Mavroeidis reveals the relationship between Vassos and Aristides slowly and tantalizingly. There is also a stunning revelation that does not answer the riddle of the friendship bur revealing it would be a serious spoiler.

Aris played by Michalis Sarantis goes on a journey of discovery about himself, his “friends” and his ambitions. More importantly he travels back into family history and lore. He lies to himself and to others as he tries to extricate himself financially and from his grandfather’s possible moral culpability. His parents have their own version of the truth as does Vassos. It’s all opaque and very intriguing.

Michalis Sarantos as Aris looks lost. He is a man in search of solutions to his personal problems and issues from the past. His understated performance is well-modulated and superb.

Thanasis Papageorgiou as Vassos appears like an old man who suffered a great deal because of his political views. Even in the 21st century he is a socially unacceptable pariah. He is social dirt. We see him as a man of decency, but we cannot be sure. A fine performance.

In the end the plot strands are left hanging because Mavroeidis want us to choose, for ourselves, if we must. One of the final scenes is a dramatic shot of Mount Olympus as Vassos is driven by Aris to his village.

The film is shot in Major Aristides’s house and around Papagou. In the old, rundown house, we see a carved wooden chair in front of well-stocked bookshelves. This was Aristides’ office, and it represents him as a meticulous man of learning and authority. But that may be just as much illusion as reality. We see a ceremonial officer’s sword hanging on a wall several times. Will someone use it? Again, Mavroeidis teases us with its mysterious presence.

The scenes around Papagou are of a pleasant suburb. It was in fact built by Field Marshal Alexandros Papagou for army officers in the 1950’s when he was Prime Minister of Greece. An ideal location for the film.

The film’s title in Greek is O Apostratos (Ο Απόστρατος) meaning a retired officer or perhaps a forcefully retired officer. You may stretch it to mean a useless man or a defunct man. There are numerous clubs in Greece for retired officers and they can hardly be taken to refer to themselves as defunct. Calling the film Defunct may be another example of Mavroeidis being opaque about his work.

Defunct, written and directed by Zacharias Mavroeidis, was streamed on November 14 and 15, 2020 as part of the European Union Film Festival. For more information see: www.euffto.com

James Karas is the Senior Editor – Culture of The Greek Press. This review appears in the newspaper.