JESUS CHRIST SUPERSTAR – REVIEW OF PRODUCTION AT PRINCESS OF WALES

Jesus Christ Superstar has moved from one of the most popular rock operas and become almost legendary. Ten years ago, the Stratford Festival marked the fortieth anniversary of the premiere of the work and this year the Princess of Wales theatre offers the 50th Anniversary Tour of the opera.

The production chosen for the tour is the 2016 staging at London’s Regent’s Park Open Air Theatre directed by Timothy Sheader, designed by Tom Scutt and Choreographed by Drew McOnie. That production has taken off on a world tour and is making a pitstop at the Princess of Wales Theatre to huge audiences but under pandemic restrictions including the lineups for vaccinations checks.

For anyone living under a rock who may not know the story of the musical, it is about Christ’s last week on earth, call it Holy Week for Christians or Passover for Jews. We follow his arrival in Jerusalem, his trial and his crucifixion, based loosely on the Gospels. It is not suitable for fanatics who may prefer a more pious telling of the Passion. 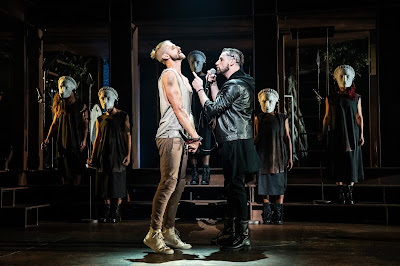 It contains a lot of heavy-beat rock music, some beautiful melodies and dramatic dancing. Sheader has chosen to treat the production almost like a rock concert. He wants to generate energy, create excitement and rouse the audience to pitches of ecstasy as they listen to the music, hear the intense and sensational singing and watch the extraordinary events of the betrayal, arrest, trial and crucifixion of Jesus Christ. He is successful but one may complain about a few pitfalls.

A young Andrew Lloyd Webber provided the music and Tim Rice wrote the lyrics for the work. Scutt’s two-story set has the orchestra on top and the dark, foreboding and dramatically lit stage below. Lee Currant as the lighting director adds to the intensity of the performance with unremitting use  of spotlights that whirl around the theatre .

But the performance at the Princess of Wales has some issues. Generally, it is the excessive volume at which the music is performed. It struck me like a performance by a favourite rock star who sings at the highest pitch that he can reach and that he holds for as long as his lung capacity will allow with the accompanying orchestra competing for volume. 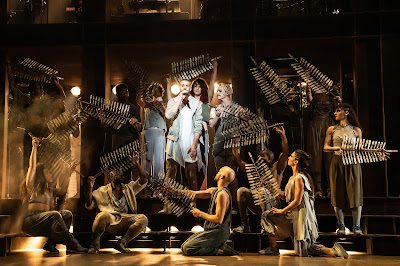 Take Tyrone Huntley as Judas. (He replaced James D. Beeks in the role on November 23, 2021 when the latter was arrested for involvement in the January 6, 2021 attack on Capitol Hill). He sang the role at Regent’s Park in 2016 and is not a haphazard replacement. He has a big voice and is an agile performer physically and vocally. He performs with a microphone in his hand at times as if this were a concert and he needs to hold the audience not just with his vocal ability but by reaching the highest notes even if it approaches falsetto levels and never coming down from the peak. That is done by some of the other performers including Aaron LaVigne as Jesus.

The dancing is used for the same purpose of arousing excitement in the audience. It is wildly frenetic and at times looked more like Zumba than ballet.

There is a way of performing Jesus Christ Superstar at a less frenzied pace and letting the music and lyrics be heard. The pace maintained in this production made some of the lyrics simply incomprehensible. There are quiet moments as well. Jenna Rubaii as Mary sings “I Don’t Know How To Love Him” with beautiful resonance and there are other less frenzied scenes that do justice to the opera. Unfortunately, there is also the unpleasantness of the eardrum-shattering scenes.

The Shaw Festival has struck the perfect note for the holidays by bringing back two marvelous chestnuts. It would be hard to lift one’s spirits higher than with fine-tuned and delightful productions of A Christmas Carol and Holiday Inn. Both shows take us to distant, different but, in our imagination, familiar worlds that we watch with pleasure and extend a standing ovation to all concerned in gratitude.

Holiday Inn started as a movie that was being filmed in late 1941 when Pearl Harbor was attacked by the Japanese and catapulted America into World War II. The filming was completed in early 1942 and the movie was a hit. It contained incomparable music and lyrics by Irving Berlin celebrating major American holidays and with stars like Bing Crosby and Fred Astaire it could hardly fail.

Most of the songs of the movie were used to shape a stage musical with an improved script by Gordon Greenberg and Chuck Hodge. It opened on Broadway in 2016 where some embarrassingly racist content (Abraham Lincoln in blackface!) was mercifully removed. 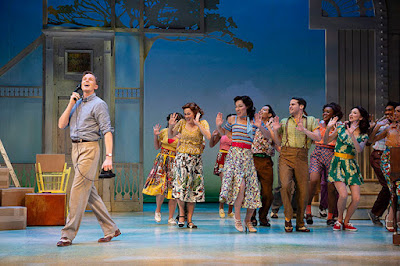 What do you get at the Festival Theatre in Niagara-on-the-Lake?  You get a plot, okay?  Jim (Kyle Blair) and Ted (Kyle Golemba) are the best of friends, a song and dance duo who perform around the U.S.A. with the lovely Lila (Vanessa Sears). Jim loves Lila and wants to marry her and move to a farm in Connecticut. Lila wants stardom and she dumps Jim and goes off with Ted.

On the bankrupt farm Jim meets the lovely Linda  (Kristi Frank), the former owner of the farm. Jim and Linda will turn the rambling farmhouse into a holiday inn where they will put on shows only during holidays. Please, no guessing about what will happen to the two couples. You are here to have fun not to foretell the future.

Irving Berlin provides some very familiar songs which you will recognize even if you have never seen the movie. How about the following: White Christmas, Cheek to Cheek, Easter Parade and a dozen other melodies that mark Thanksgiving, New Year’s Eve, Valentine’s Day, Easter  and American holidays like the 4th of July. The singing by the principals, Louise (Gabrielle Jones) and the ensemble may be uneven at times but you are enjoying the production so much you skip such details.

And the dancing? These actors can tap, twirl and get in the air with abandon. What do you think Fed Astaire was doing in the movie? And  Golemba does the firecracker dance superbly. A huge bow to choreographer Allison Plamondo

Singing and dancing look much better when there is an ensemble of beautiful women and handsome men on stage. The costumes are stunning and I did not count how many changes there were but their splendour was captivating. The sets which required numerous changes were handled judiciously and effectively. Chalk up a big one for set and costumes designer Judith Bowden.

Paul Sportelli is credited with the musical direction and Rachel O'Brien, the Shaw’s Music Intern, conducted a few of the musical numbers when I saw the production. I am advised that she is being prepared for her conducting an entire show.

Kevin Lamotte designed the bright lighting that added to the pleasure of watching the production.

Kate Hennig directed the wonderful holiday bouquet and took us to another world. Unmitigated kudos to her for the two-hour trip.

Have you never seen or read Charles Dickens’ A Christmas Carol? The Shaw Festival has decreased that possibility by presenting Tim Carroll’s adaptation of that unforgettable story over the last several years in the appropriate season.

The telling is imaginative, creative, authentic but not slavish and a complete delight. You need a door? Well, an actor holds a small board tied to his arm and swings to open and shut, well, the door. An actor holds another board on her head and presto Scrooge has a desk. They use puppets and painted scenery to have the action move briskly and tell the famous story of reformation and redemption. 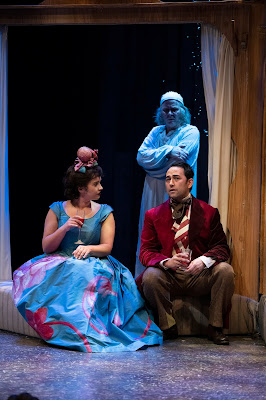 Julie Lumsden as Emily, Kelly Wong as Fred and Graeme Somerville as Scrooge in
A Christmas Carol (Shaw Festival, 2021). Photo by David Cooper..

There are ten actors who do not hesitate to burst into singing Christmas carols and provide humour. We get to the story of course and Graeme Somerville leads the cast as a mean, stingy, horrible Scrooge but we know that underneath that nasty exterior there is a decent and generous man. (We have read the story and seen previous productions, you see.)

We need three Spirits: the Spirit of Christmas Present (Peter Fernandes), of Christmas Past (Kelsey Verzotti) and of Christmas Future, a scary ghost floating in the air and terrifying Scrooge of the effects of his conduct. There is no room for doubt. Scrooge and the rest of us need to change.

His nephew Fred (Kelly Wong) and his wife (Julie Lumsden) set the example for family feeling and forgiveness. But what we want to see is the loving family of the poor Bob Cratchit (Andrew Laurie) and his wife (Marla McLean, who is also movement and puppetry Captain) and their disabled son Tiny Tim, judiciously played by a puppet.

Tim Carroll did the original adaptation and directed that production. This year’s staging is capably directed my Molly Atkinson.

Fit these two productions between shopping malls and credit card abuse and you will enjoy Christmas even more.

A Christmas Carol by Charles Dickens, adapted by Tim Carroll and Holiday Inn by Irving Berlin continue until December 23, 2021, at the Royal George and Festival Theatres respectively in  Niagara-on-the-Lake, Ontario. www.shawfest.com/

Posted by James Karas at 1:00 PM No comments: