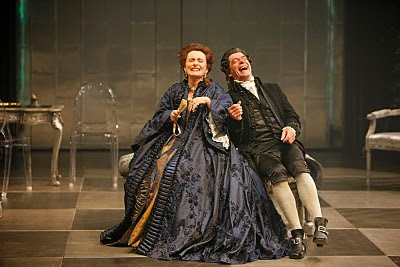 
Dangerous Liaisons is this season’s fourth production at the Festival Theatre. With two plays by Shakespeare and an American musical, this comedy adds a British and a French connection. The play by Christopher Hampton is based on the novel by Pierre-Ambroise-Francois Choderlos de Laclos. The novel and the play used the French title, Les Liaisons Dangereuses, but Stratford has decided to give us the title in English.

What is a dangerous liaison, you ask. In the hands of Hampton and Laclos, “dangerous” is a gross understatement. “Liaison” means getting entangled with two French aristocrats, namely Le Vicomte de Valmont (Tom McCamus) and La Marquise de Merteuil (Seana McKenna). You may not remember their names but once you have met them, you will not forget their characters.

Do not imagine cruelty or torture á la Marquis de Sade or Robespierre and the Terror. The Vicomte and the Marquise are far too civilized, polished and well-behaved for such conduct. The cruelty and inhumanity that the two display are done with style, delicacy and panache.

While performing their tasks, they speak in balanced sentences, with wit, fine manners, deferential curtsies and the polish that comes with high birth.

More details? The Vicomte and the Marquise were former lovers. The latter was dumped by another lover and she wants revenge. She wants Valmont to seduce Cecile (Bethany Jillard), her former lover’s fiancée. What exquisite pleasure it would bring to the Marquise to know that when her former lover exercises the priapic jus of his prima nocta he will discover that his bride’s hymeneal path had been cleared by someone else. We must use polite language lest we be accused of speaking of country matters, as Hamlet would say.

Valmont considers the job beneath his talents. Seducing a girl fresh out of a convent school is far too easy. He wants to lay siege on the beautiful, religious, virtuous and faithful wife, La Presidente de Tourvel (Sara Topham).

The apparatuses are assembled. His valet Azolan (Paul Dunn) seduces Tourvel’s servant in order to gain access to her letters. Valmont saves a poor family from bankruptcy so he can be painted as a man of virtue. He declares his love to Tourvel! She resists; he insists, she fights, he persists. He conquers.

Valmont wants more than mere sexual conquest. He wants Mme de Tourvel to destroy her moral universe for him. She falls in love with him and does destroy her world. At this stage, Valmont, in an act of sadistic cruelty, abandons her.

There are other Machiavellian machinations in the play and director Ethan McSweeny does a marvelous job of bringing out the comedy and cruelty of the piece.

McKenna and McCamus are superbly matched as the scheming couple and turn in exquisite performances. Sara Topham is beautiful and statuesque as Mme de Tourvel until she breaks down under Valmont’s assault.

Bethany Jillard is excellent as the nubile target of Valmont’s lust and Michael Therriault is good as the doltish Danceny.

The set by Santo Loquesto struck me as 18th century high tech, meaning that it was neither. There were spot lights on the stage that were occasionally aimed at the audience. There was also some discordant modern music that can most charitably be described as annoying. All of these minor flaws are easily ignored. Like Mme Tourvel’s virtue, all complaints vanish in the face of a wonderful play done exceptionally well.

Dangerous Liaisons by Christopher Hampton opened on August 12 and will run until October 30, 2010 at the Festival Theatre, Stratford, Ontario. www.stratfordfestival.ca 1-800-567-1600
Posted by James Karas at 10:33 AM