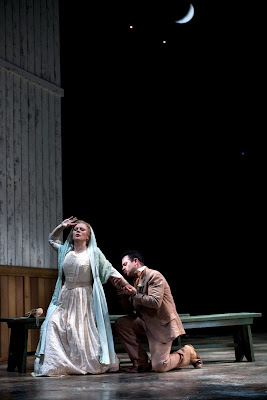 We all know that mythical opera lover who is too embarrassed to admit to his beer-swilling, t-shirt-wearing, couch-potato friends that he would rather be watching Tosca butcher Scarpia than the New York Yankees slaughter the Blue Jays. Social pressure used to prevent him from indulging his passion until 1975 when the Glimmerglass Opera Festival was launched. Now he can go to Cooperstown on the pretence of seeing the Baseball Hall of Fame, visiting a thousand stores selling baseball memorabilia and even watching the boring game. In reality he is off to see four operas in the Alice Busch Theatre on the shores of Otsego Lake.

In its choice of operas and quality of productions, Glimmerglass can hold its own against the best and that, for your friends, includes the Yankees and whoever won the World Series last year. This year’s choices are two repertoire staples and two adventurous productions. The warhorses are Mozart’s The Marriage of Figaro and Puccini’s Tosca. The others are Handel’s Tolomeo in its first professional production in North America and Aaron Copland’s rarely produced The Tender Land. Here are the scores in the order that I saw them.

THE MARRIAGE OF FIGARO

From the rush of anticipation created by the opening chords of the overture to the final scene of forgiveness, reconciliation and conjugal love, Mozart’s masterpiece is opera at its finest. The Glimmerglass production directed by Canadian Leon Major is a sheer delight and provides some outstanding singing. There are a few “errors” by the coach but the team displays consistently good hitting and the result is a joy in the opera park.

American bass-baritone Patrick Carfizzi is a Sarkozy-sized Figaro, physically and vocally agile, who does a superb job in the lead role. Russian soprano Lyubov Petrova is a topnotch Susanna. Her voice has a lovely coloration and she is so attractive one can understand why the Count cannot keep his hands off her. Definite home runs here.

American soprano Caitlin Lynch has a fine, regal bearing and a beautiful voice and she made a superb Countess Almaviva. The Countess sings two of the most beautiful arias in the repertoire, “Porgi, amor” and “Dove sono,” where she laments the loss of her husband’s love and wonders what happened to the moments of sweetness and pleasure that have vanished leaving only memories. Lynch sings beautifully and movingly and sends the ball out of the park.

American bass-baritone Mark Schnaible sang a credible Count Almaviva and Haeran Hong made a significant impression in the small role of Barbarina. The South Korean soprano is a member of Glimmerglass’s Young American Artists Program and she clearly deserves more exposure. Nice triples for both.

The hormone-driven Cherubino was sung by French mezzo-soprano Aurhelia Varak. She is of small stature and has the required agility for the role and almost makes it to home base.

Donald Eastman’s set was simple to the point of austerity. The Count is not as wealthy as we may suppose him to be. The opera is set sometime in the 19th century. The women wear long dresses but the men have suits. No fancy wigs or lace. The set gets a mere double most likely because of financial restrictions.

Canadian Director Leo Major coaches the team and there are issues with some of his choices. He prefers many arias to be sung from a sitting position. It is fine for the plaintive “Dove sono” to be sung while sitting down by why is the angry Dr. Bartolo (young artist Adam Fry) seated for “La Vendetta.” Surely singers can move and sing and gesture at the same time. The coach gets an error.

Puccini’s fourth opera is a pot-boiler by any standard but the contents of the pot are darn good. Ned Canty directs a dark and menacing production that hits some home runs and a few triples.

The home run belongs to Lester Lynch’s Scarpia. The pot-bellied American baritone looks fiendish and menacing. Scarpia is a rapist who prefers force to persuasion in sex and with his sonorous voice, Lynch gives a thrilling portrayal.

Tenor Adam Diegel has a powerful voice (it’s a small theatre with good acoustics so everyone sounds at his best) and his Cavaradossi came off quite well. His voice tends to have better force than tonal quality in the upper register and he only managed a triple. Soprano Lise Lindstrom was a dramatic and powerful Tosca. Unfortunately during the first act she looked undersexed, underdressed and underfed – like a school marm, you might say – and not the flamboyant diva after whom Scarpia lusts. She is given a beautiful white gown in Act II and is far more attractive.

The set, lighting and costumes were all in dark gray and black tones. A bit overdone, I thought. We need to see what is going on and too much darkness for effect can end up being annoying.

David Angus conducted the Glimmerglass Opera Orchestra and Chorus and the latter rose to a thrilling pitch at the end of Act I.

With George Frideric Handel’s Tolomeo, the crypto-operaphile has moved to an entirely different level of hidden passion. This opera premiered in 1728 and this is the first time it is being professionally staged in North America. It is high baroque, delectable and silly, a rarity to be sure, and our friend can only see it wrapped in a plain paper bag. His friends may forgive The Marriage of Figaro thinking it is an Italian sitcom but Tolomeo? Never.

If caught, the only possible defense is to say that he is studying Hellenistic history. He is following the labyrinthine history of the Macedonian dynasty that ruled Egypt after Alexander the Great and he is focusing on Ptolemy IX.

In Tolomeo, King Ptolemy IX is thrown out of Egypt by his mother Cleopatra and brother Alexander. He ends up in Cyprus where Elisa, the sister of King Araspe falls in love with him. Ptolemy’s wife Seleuce also arrives disguised as a shepherdess and Araspe falls in love with her. Then Ptolemy’s brother Alexander also arrives and he …. Forget the plot.

The opera consists of a number of short recitatives and arias. The characters tend to walk on stage, sing their piece and saunter off. There are few duets. Most of the arias are quite delightful but the parts do not make a satisfactory whole.

Director Chas Rader-Shieber could not take the plot seriously and decided to mildly ridicule it. There are some cheap laughs like bringing fans on stage and blowing flower petals to illustrate the libretto. There are three doltish footmen who stroll on and off the stage. Staging is spotty at best and the costumes are from any time period that you want.

The opera and the production, aside from the comic touches added by Rader-Shieber depends on the arias and the singing and there is gold here. Soprano Joelle Harvey hits the ball out of the park with her gorgeous singing but countertenor Anthony Roth Costanzo as Tolomeo and Canadian mezzo-soprano Julie Boulianne get homers quite handily. Young Artists mezzo-soprano Karin Mushigain (Alessandro) and baritone Steven LaBrie (Araspe) more than hold their own.

You are not likely to see Tolomeo in the repertoire of too many opera companies but it would be interesting to see someone take the plot seriously and provide some more staging and less tomfoolery. In the meantime, a seventh-inning bow to Glimmerglass for bold programming.

The final offering is The Tender Land, an opera that premiered in 1954 but is very rarely performed. It has music by Aaron Copland with a libretto by Horace Everett.

The opera is performed by Glimmerglass’s Young American Artists and the Festival deserves a grand slam for the training program. Thirty lucky and talented American artists are selected to work with professionals and perform. Several of them participated in the other productions but the cast of The Tender Land was made up entirely of young artists.

The Tender Land is a coming of age story about Laurie (Lindsay Russell), a high school graduate, who falls in love with Martin, (Andrew Stenson). Her family objects strenuously but Laurie decides to leave them and follow her love. Shades of West Side Story and Picnic come to mind.

The opera is composed through and that means some pretty ordinary conversations are sung rather than spoken. The music would be appropriate as background to dialogue in a film but listening to conversation recitative-style left me lukewarm.

There is a love duet in the second act between Laurie and Martin. The music swells but it never soars. The lyrics rarely rise above the prosaic and the whole thing left me lukewarm, at best.

That is truly unfortunate because Russell and Stenson gave marvelous performances as did Stephanie Foley Davis as Ma Moss, Mark Diamond as Top and Joseph Barron as Grandpa Moss. They deserve a better work to showcase their talents


For the closet opera lover, then, Glimmerglass is the ideal place to enjoy your secret pleasure. There is even a bonus in store for you. You will find a beautiful expanse of grass along the shore of the lake and that is where you play golf – you hit a small round ball with various tools to get it in a slightly larger round hole. For that reason, I gather, a six-hour session is known as a “round” of golf. Tell your friends that you played a “round” without dying of boredom. But do not commit the faux pas of telling them that the large body of water beside the course is the aquatic hazard for the 19th hole. It is Otsego Lake.

The Glimmerglass Festival continues until August 24, 2010 at the Alice Busch Opera Theater, Cooperstown, New York. Tickets and information (607) 547-0700 or www.glimmerglass.org
Posted by James Karas at 1:21 PM