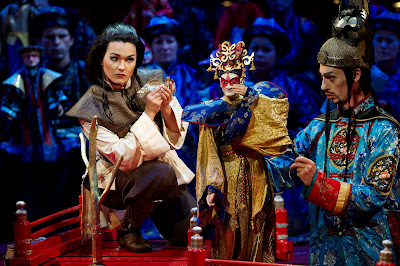 When opera was “invented” in early 17th century Florence and quickly spread around Italy, producers found out what “sells”. What sold then with the people and still does is spectacle. By the eighteenth century, all types of stage machinery had been invented to produce more and more visual effects at the expense of the music, libretto and singing that were supposed to be the main features of opera.

That is a long way around the block to stating what the Aix-en-Provence Festival, the Canadian Opera Company, the Nederlandse Opera, Amsterdam and the Opéra national de Lyon have done with their production of Igor Stravinsky’s The Nightingale and other fables. They clearly wanted to push the spectacular elements of opera further and provide a production that gives visual as well as musical and vocal splendour.

The man chosen for the job was Canadian director Robert Lepage. He conceived the work and it had its premiere in Toronto last October. It is one of the five operas offered by the Aix-en-Provence Festival and it opened at the Grand Théâtre de Provence as Le Rossignol et autres fables.

These are short, beautiful pieces but the main part of the first half of the production is “The Fox”, a composition based on a Russian fable that premiered at the Paris Opera in 1922. The story of the wily fox that tries to devour the dumb rooster in the farmyard is sung by two tenors (Merat Gali and Edgaras Montvidas) and two baritones (Nabil Suliman and Ilya Bannik).

While the orchestra and the singers “tell” the story, Lepage has provided amazing hand-shadow theatre and some amazing acrobatic displays to illustrate the fable. The hand shadows in the form of animals are projected on a screen above and behind the orchestra. The acrobats/dancers perform behind the screen and all we see are their shadows. Lepage is not trying to fool us that they are shadows because their feet are clearly visible below the screen.

Le Rossignol forms the second half of the show. As in the first half, the orchestra is on stage. Lepage has a better use for the pit than hiding the musicians. He creates a pool and that is where the action of the piece, based on Hans Christian Andersen’s “The Emperor’s Nightingale”, takes place. The libretto is by Stravinsky and Stepan Mittussow.

A Fisherman (Edgaras Montvidas) presents the Emperor of China (Ilya Bannik) with a nightingale that sings, well, like a nightingale. In this case it is using the gorgeous voice of soprano Olga Peretyatko and for my money she is better than the bird.

The Bonze of Japan (Yuri Vorobiev) brings a mechanical bird and the nightingale flies away. When Death (Svetlana Shilova) comes to claim the Emperor, He is so moved by the Nightingale’s beautiful singing that he allows the Emperor to live. Happy ending.

The achievement here is not the story or the beautiful singing but Lepage’s method of telling it. Almost all the action takes place in a pool where the characters manipulate puppets of themselves or puppeteers manipulate other puppets. The latter, frequently submerged, are dressed all in black and produce some amazing effects. Their manipulation of Death consisting of a huge skull and skeleton is breathtaking.

The orchestra of the Opéra national de Lyon was conducted by Kazushi Ono. The singers that deserve and got loud applause are Peretyatko, of course, but also Montvidas for his well done Fisherman, Bannik as the Emperor and the puppeteers.

This is a production that pushes the visual boundaries of opera without sacrificing the music or the singing. The question is how many opera companies can afford the services of a Robert Lepage not to mention the construction of a swimming pool and the work of a half a dozen puppeteers.

Le Rossignol et autres fables by Igor Stravinsky opened on July 3 and was performed six times until July 10, 2010 at the Grand Théâtre de Provence, Aix-en-Provence, France. www.festival-aix.com
Posted by James Karas at 12:53 AM