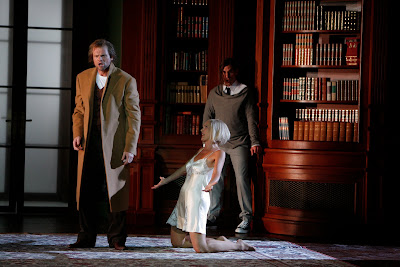 Can Mozart’s Don Giovanni be turned into a family drama that takes place entirely in the library of the Commendatore’s house? No talking statue, no scenes in the countryside, no street scenes. Strictly a family drama?

The answer is yes and the result is one of those brilliant, original and masterly interpretations of a masterpiece that is difficult to conceive until you have actually seen it done.

That is what Russian director Dmitri Tcherniakov and dramaturge Alexei Parin have done for their recreation of Don Giovanni for the Aix-en-Provence Festival.

In order for this to be a family drama we have to make the characters of the opera related to each other. No problem for Parin. Donna Anna, the Commendatore’s daughter is also the mother (from a previous marriage) of Zerlina, the country girl that Don Giovanni will woo. Donna Elvira, Don Giovanni’s discarded lover, is in fact his wife and a cousin of Donna Anna. His servant Leporello is a relative of the Commendatore’s. In other words, they all have the right to be at the Commendatore’s house silently attending a funeral during the overture. This funeral or that of the Commendatore that follows are not in the original work but they fit in this concept.

The family drama will continue to the end in the gorgeous, wood-paneled library of the Commendatore’s house and you will wait and wonder how the next seen will be handled. It will be handled with brilliant and masterly strokes that will leave you aghast. This is opera integrating drama and singing like you have never seen before.

Don Giovanni, the lecher of Leporello’s Catalogue aria is a middle-aged man, disheveled, tired and alcoholic. He goes through the motions of wooing but he is not interested in seducing women. When he tells the innocent Zerlina (Kerstin Avemo) that she is destined to be his wife in “Là ci darem la mano” he is unkempt, sitting on a chair and not interested in her at all. She falls for him in any event and pursues him.

When Masetto (David Bizic), Zerlina’s fiancé gets a thrashing from Don Giovanni and she sings the beautiful aria “Vedrai, carino” in order to comfort him, she is holding, indeed embracing, Don Giovanni's coat while poor Masetto is writhing in pain on the floor.

Best of all is Don Giovanni's wooing of Donna Elvira’s maid with the beautiful aria “Deh, vieni alla finestra, o mio tesoro,” (O come to the window, beloved). It is the ultimate example of the amoral lecher who will pursue anything that moves. In this production, a drunk, pathetic Don Giovanni is singing to the air. There is no maid to woo as he is totters around the floor looking for solace that no longer exists.

There are numerous such examples. The result is a superbly acted piece of theatre accompanied by Mozart’s music and Lorenzo da Ponte’s libretto. Opera at its best.

The standing ovation for Tcherniakov and Parin should include conductor Louis Langree and the brilliant performance of the Freiburger Barockorchester and the singers/actors who provided such integrated performances.

Start with Danish baritone Bo Skovhus who delivers a very different Don Giovanni but of the highest order. You may miss the bravura of the legendary seducer but you will be bowled over by the tired, middle aged Don so brilliantly sung and acted. His side-kick Leporello of American bass baritone Kyle Ketelsen is a lithe, young man with a voice that can go deep and maintain control.

Marlis Petersen is a sexpot of a Donna Anna who oozes sexual desire without finding fulfillment. She goes down on the floor and spreads her legs for her fiancé Don Ottavio (done very well by Colin Balzer) and he does not get the message that she wants sex.

Kristine Opolais's Donna Elvira is a modern wife whose husband left her and she is robbed of showing some of the fiery bitterness that, say, an 18th century woman may have displayed. Still a first-rate performance.

There is still the question of how to deal with the talking statue of the Commendatore and the send-off of Don Giovanni to hell. This is a naturalistic family drama and statues don't talk in them. Tcherniakov and Parin find a brilliant solution to that too.

The good news is that this is a co-production with the Canadian Opera Company and we should be able to see it in Toronto in an upcoming COC season.


Don Giovanni by W.A. Mozart opened on July1 and was performed ten times until July 20, 2010 at the Théâtre de l'Archevêché, Aix-en-Provence, France.
Posted by James Karas at 3:45 PM