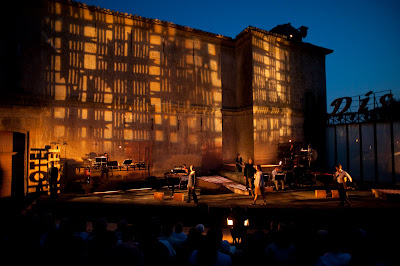 Un retour – El regreso is a new chamber opera by Oscar Strasnoy with a libretto by Alberto Manguel. It is one of the five operas offered by the Aix-en-Provence Festival, this one being performed in an outdoor theatre in the countryside near a village called Puyricard. But the opera is only a part of the programme. On the lush-green fields of an old chateau, you are treated to a dance performance, a poetry recital or some madrigals by Monteverdi and Barbara Strozzi.

When these are finished, there is a dinner break on the grounds of the chateau. By then it is dark and the opera can begin.

Finding the Grand Saint-Jean, the old chateau where the performances take place, should also be included in the programme because it does provide a tour of the countryside outside Aix. After Google maps and GPS fail to disclose the location of the chateau, you depend on asking the locals for directions. The directions that went beyond the shrug of the shoulders no doubt were meant to be helpful and may even have been accurate but the chateau appeared to be a moving target. Given enough time, you will find the chateau.

Michele Noiret performs a dance on a circular wooden floor surrounded by benches. The dance is called “La primultine rencontre,” something like the prenultimate meeting. It refers to something that happens at the beginning or at the end; it is first and it is last but happens only one time. Noiret performs simple steps with almost no musical accompaniment.

You walk across a grassy field to a similar circle sans the wooden floor. A young man sits on a tree stump and reads some poetry including a long passage from Virgil’s Aeneid. The passage describes Aeneas’s visit to the underworld where he again meets Dido, the Queen of Carthage. He stopped at Carthage on his voyage from Troy to Latium and fell in love with her. He had to leave her behind, however, because fate had decreed more important duties for him, namely the founding of Rome. The choice of poetry is not accidental.

Manguel’s libretto for Un Retour – El Regreso is based on his own novella about Nestor Fabris (Job Tomé), a former activist, retuning to Argentina after thirty years of absence. He is returning purportedly to attend the wedding of his godson but the story is more of a parable about going into the underworld where he meets Marta, the woman he loved, and the friends that he left behind so long ago.

The libretto is in French, Spanish and Latin (now you get the connection with the reading from the Aeneid). Fabris is another Aeneas and Marta (Amaya Dominguez) is the Dido that he left behind.

The music is scored for piano, percussion, trombone and trumpet. There is plenty of dissonance and generous use of percussion as Fabris goes through the airport, finds his friends and meets Professor Grossman, a man he admired thirty years ago. Grossman takes him to a place called DIS. The letters stand for Disgrace, Infamy and Somber and the structure is bathed in red light and it is, of course, hell.

The opera moves quickly from scene to scene. It is a political as well as an esthetic work as the composer and librettist, both Argentineans, look back at the recent history of their country. The dissonant music is apropos the situation and the opera together with the dancing and poetry recitals add up to a fascinating evening under the stars.
___