SOUTH PACIFIC AT THE FOUR SEASONS – SOME ENCHANTED AND GREAT MUSICAL! 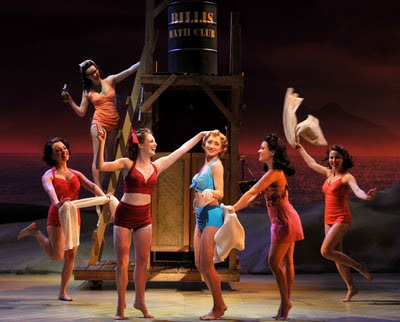 Aubrey Dan has three things going for him: ambition, vision and money.

His vision and ambition are to bring Broadway to Toronto. He has even registered “Rewarding Broadway Experience” as a trademark. Now many people can do all of the latter but few mortals have the financial wherewithal to even imagine bringing a Broadway musical to Toronto. Aubrey Dan has no such limitations and he wants Broadway in the heart of the city.

Unfortunately Mirvish Productions had first dibs on the theatres that it did not already own and despite some brave legal scuffles, Mr. Dan was left with the suburbs. The suburbs that is until he realized that the Four Seasons Centre, Toronto’s opera house, is available during the summer. Now Mr. Dan could bring Broadway to downtown Toronto and he did.

The choice of musical and the production could hardly be better. The musical is Rodgers and Hammerstein’s South Pacific and the production is the extraordinarily successful revival at New York’s Lincoln Center, directed by Bartlett Sher.

True what you get at the Four Seasons is a road-show company (even Aubrey Dan cannot bring the Broadway cast). But, aside from some minor glitches and one substantial complaint, this is an outstanding production of a great musical.

Cusack and Howard get some of the best and most famous songs in Broadway history. He sings “Some Enchanted Evening” and “This Nearly Was Mine” with sustained sonority and vocal splendour. Cusack sings “A Cockeyed Optimist”, “I’m Gonna Wash that Man Right Outa Ma Hair” and “Honey Bun” with verve and vocal beauty. She has a luminous voice that is a delight to listen to.

The other love story is between the Princeton-educated Lt. Cable and a Polynesian girl named Liat. The idea of a hick from Arkansas marrying an older Frenchman who has two children by a Polynesian woman was pushed through in 1949, the year South Pacific premiered. The thought of an American officer marrying a Polynesian girl must have seemed too much and Cable was killed. It should be noted however that Rodgers and Hammerstein faced American prejudice head on and their position on bigotry is clearly stated in the title of one of the songs: “You’ve Got to be Carefully Taught” hatred and prejudice.

The ensemble pieces such as “Bloody Mary” and “There is nothing like a dame” are done superbly.

The minor vocal hitch is provided by Anderson Davis as Lt. Joseph Cable. He does not quite manage to convey his passion for Liat (Sumie Maeda), the Polynesian girl that he has fallen in love with.

The more substantial complaint is the use of microphones. The Four Seasons Centre has excellent acoustics and we are entitled to hear the actors deliver their lines from their mouths and not through loudspeakers. With the use of microphones, the lines spoken come through the loud speakers no matter where the actors stand. The musical pieces sounded fine and the microphones may well have enhanced the singing. Dialogue through loudspeakers is unacceptable.

Subject to that, one must give Aubrey Dan and Dancap Productions full credit for keeping their word and indeed bringing first-rate Broadway to Toronto.