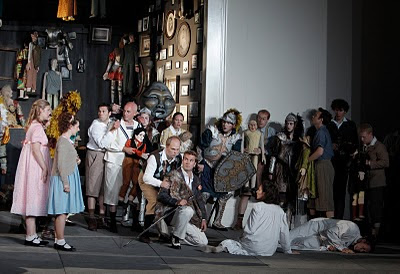 Aix-en-Provence is a beautifully preserved medieval city about thirty kilometers north-east of Marseilles. Its medieval structures, narrow streets and rich sightseeing opportunities are sufficient to please almost any discriminating traveler. But for some of us, all of that pales in comparison with what the Aix-en-Provence Festival has to offer. Between July 1 and 21 you can see five operas in the Festival’s four theatres and enjoy a large number of concerts and other events throughout the summer. And, if you must, you can still shop and eat.

The story of Alcestis is one of those myths that once heard is never forgotten. Admetus, the King of Thessaly is told that he will die. Apollo owes him a favour and grants him the opportunity of staying alive if he can find a replacement for the journey to the Underworld. No one in Thessaly jumps at the opportunity of dying for the king except his wife Alcestis. (I am using the English version of the names for convenience.)

Alcestis’s act has fascinated scores of writers since antiquity. There were a number of tragedies based on the myth in Ancient Greece but only Euripides’ Alcestis has survived. The reasons for and consequences of her decisions were picked up by composers and librettists soon after the advent of opera in the 17th century and dozens of operas have been written about her.

Is it an act of sacrifice? Is it a statement of ultimate love, devotion and fidelity to her husband? What is it? She says that she is willing to die because she cannot live without him. What about her duties as a mother and queen? Can such an act, be it sacrifice, devotion, love, duty, be justified? And what about husband Admetus? He does eventually say he cannot live without her but he never comes out looking very good. This is a myth about a woman.

Christoph Willibald Gluck (1714-1787) composed Alceste based on a libretto by Italian poet Ranieri Calzabigi and it opened in Vienna in 1767. The “Vienna Version,” as it came to be known, was in Italian. Francois-Louis Gand Le Blanc du Roullet translated and revised Calzabigi’s text and produced a French version. Gluck re-worked the music and the “Paris Version” of the opera opened in 1776.

The Festival produced the Paris version in the Théâtre de l'Archevêché, the outdoor theatre located in a building that used to be the local archbishop’s residence. It does not get dark until very late in July and the opera did not start until after 10:00 p.m. and it finished well after one in the morning.

European festivals seem to have made it their specialty to produce controversial productions and the Aix’s Alceste, directed by Christof Loy, is no exception.

The most important aspects of the production are fortunately not controversial at all as is the singing done by soprano Veronique Gens in the title role and the English Voices as the chorus. The brunt of the work falls on them but tenor Joseph Kaiser as Admetus, baritone Andrew Schroeder as the Grand Priest of Apollo and baritone Thomas Oliemans as Heracles do superb work.

Gens’s Alcestis is a middle-class mother and wife. She wears flat shoes and simple dresses and is faced with a terrible decision. She makes the decision but has second thoughts, even doubts about it, but she never goes back on it. She believes it is the right decision. Loy may want us to think that she is acting in defiance of the unjust gods but there is no evidence of that in her acting or singing. She sings her signature aria “Divinités du Styx” in anguish and not in anger or defiance. A superb vocal and acting performance.

Kaiser’s Admetus could be an office worker, suit and tie on, who learns two devastating pieces of news: that he is about to die and that he is saved by his wife agreeing to take his place. He simply cannot handle the situation and goes all over the emotional board from elation to confusion to despair. Kaiser does an excellent job in portraying the hapless king as envisioned by Loy.

Heracles is a friend of the family who arrives with his suitcase and travelling bags carrying presents and his magic fur stole. A bit of a playboy but strong enough to beat the gods and save Alcestis from going down under. Again well done as seen by Loy.

The production is done in front of a white wall that features two large doors and a window. The doors will open to reveal Alcestis’s bedroom and when the time comes, the underworld. They are all dressed in modern costumes but the people of Thessaly (the chorus) wear variously pants to the knees, suspenders, sailors’ or maids’ uniforms and carry dolls. They appear and act less than adult.

Admetus and Alcestis are a nice middle class couple with a couple of kids and an unprepossessing bedroom. Apollo, like Heracles, is more a clown than a god. This is a long way from any conception of Greek mythology that most of us have. This is the middle class fighting the unjust gods. So much for Apollo returning a favour to Admetus.

Loy shows the flexibility of Greek myth and baroque opera. They can be placed almost anywhere and tickle the imagination as the composer and the librettist delight the mind and ear. Some controversial productions are more successful than others and this one is not the most successful.

Alceste by Christoph Willibald Gluck opened on July 2 and ran until July 13, 2010 at the Théâtre de l'Archevêché, Aix-en-Provence, France. http://festival-aix.com/
Posted by James Karas at 12:28 AM