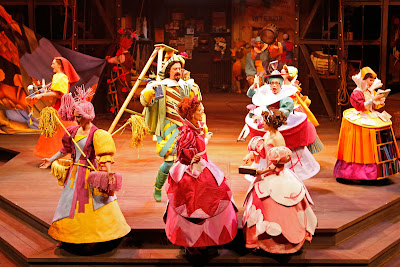 In a recent radio interview, Des McAnuff invited people to go to Stratford to see Broadway musicals. I guess that chap from Warwickshire after whom the Festival is named is not much of a drawing card as far as the Festival’s Artistic Director is concerned. We are well warned not to expect a broadly based classical repertoire that dips its toes into the deep well of world drama on a regular basis. If musicals fill the theatre, give them musicals.

Cole Porter’s Kiss Me Kate is one of the great American musicals and Stratford gives it a stupendous production. The principals can sing, dance and act and the result is a rousing performance that is thoroughly enjoyable. The bag of complimentary adjectives contains a few less laudatory modifiers but one must give credit where it is due.

Kiss Me Kate is about the backstage goings on during a production of Shakespeare’s The Taming of the Shrew in Baltimore around 1940. Fred Graham (Juan Chioran) is the producer and director of The Taming on its tryout in Baltimore before going (hopefully) to Broadway. He also plays Petruchio while his fiery former wife Lilli (Monique Lund) plays the shrew that must be tamed.

When Fred’s flowers erroneously go to Lilli instead of Lois (Chilina Kennedy), the actress who plays Bianca instead of Lilli all hell breaks loose on stage and off. When Lilli reads the card that accompanies the flowers and realizes that they were not intended for her she threatens to walk off the show. Fred retains the services of a couple of Mafia-type enforcers (Steve Ross and Cliff Saunders), guns drawn, to keep Lilli on stage. They have come to collect $10,000 from Fred on an IOU signed by Bill (Mike Jackson), pretending to be Fred. He is a ne’er do well gambler and the Lucentio of Shakespeare’s play. In short the situation on and off stage is hilarious and Porter’s music and songs from “Wunderbar” to “Tom, Dick and Harry” to “I Hate Men” and “Brush Up You Shakespeare” are about as good as they come.

Director John Doyle is also about as good as they come as a director of Broadway musicals and he puts together a rousing, fact-paced, funny and marvelous evening at the theatre. The problem is that he does not know when to stop or leave well-enough alone. Porter does not need to be improved. Doyle never met a cheap laugh that he did not like or an interpolation that he did not insert. Ok, there are not many but should there be any?

An actor should not step out of character for a laugh or any other reason. This rule does not apply to Doyle. When Bianca is wooed by “Tom, Dick and Harry” she goes into the audience and tells us that she said “Dick” ten times. We could have done without the information or the laugh. It is not in character, of course.

Bianca is supposed to be the demure sister of the shrewish Kate. Doyle has her screaming and screeching for cheap laughs. She follows direction and brings in a rousing performance.

Chilina Kennedy and Chioran are outstanding as the warring couple with gorgeous voices for Porter’s magnificent songs.

Steve Ross and Cliff Saunders practically steal the show as the two mafiosos and their “Brush Up Your Shakespeare” brings the house down. They do mention Aeschylus, Sophocles and Euripides and that’s as close as we will get to Greek tragedy this year and who knows for how many years to come.

Almost all the characters are dressed in motley colours as if we are watching a collection of clowns. It may be colourful but it, like other things in the production, simply goes over the top for effect that is neither necessary nor adds anything to the production.

Start with an A for the choice of musical, the performances and the sheer excitement the production generates and then start deducting marks for some silly directorial choices. You can damn many of Doyle’s decisions but you will still end up with at least an A- and an enjoyable night at the theatre.

Kiss Me Kate by Cole Porter opened on June 8 and will play until October 30, 2010 at the Festival Theatre, Stratford, Ontario. www.stratfordshakespearefestival.com 1 800 567-1600
Posted by James Karas at 10:42 AM