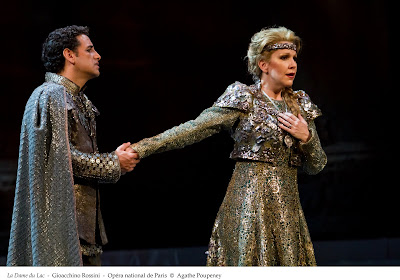 
Rossini’s La Dame du Lac (The Lady of the Lake) is not an opera you are likely to have seen or even heard of. It opened in Naples in 1819 as La donna del lago and has not been a big hit with opera house managers ever since. It has yet to play at the Metropolitan Opera in New York and it has only had one production at London’s Royal Opera House. There have been scattered productions in European opera houses in the past 190 years but nothing much.

It had never been seen at the Palais Garnier, the legendary home of the Paris National Opera until this June when all the stops were pulled to produce a Dame du Lac to remember.

La Dame du Lac is a largely static opera even though is has a plot about love, insurrection and war. It is based on Sir Walter Scott’s narrative poem and the similarities with Lucia di Lammermoor, another opera based on his work, are more than passing. The plot is developed haltingly and Rossini wrote a vocal score that requires the singers to step up to the now proverbial footlights and “let’er rip”, as they say.

If the plot creaks, the singing soars and the Paris Opera has some of the best in the business for this production. Elena, the lady of the lake, is sung by American mezzo soprano Joyce DiDonato who has become a dominant figure in that voice range and has made Rossini one of her specialties. Rossini is excellent to mezzos and he offers a huge plum of a role in La Dame du Lac. DiDonato is allowed to deliver vocal splendour in her richly textured voice. There may be limited opportunities for acting in the opera but for pure singing opportunities it is a marvel.

Peruvian tenor Juan Diego Florez is more famous than DiDonato and anyone who wants to compete in the light tenor category should count his high Cs before entering the fray. The heroic-looking Florez can hit high notes as if hopping over a low fence and has a marvellous tone that reminds you of the Jussi Bjorling type of vocalizing. He plays the role of King James V of Scotland who, disguised as a hunter, falls in love with Elena and he tells us about in some rapturous arias and duets. Despite all his singing King James does not get the girl.

Elena has given her heart to Malcolm, a role sung by a mezzo soprano since the premiere of the opera. Italian mezzo Daniela Barcellona tells us of his love for Elena in “Elena! Oh, tu, che chiamo!” and the exclamation marks are not just in the text. Malcolm does get Elena despite competition from the passionate Rodrigo of South African tenor Colin Lee. He has the support of the Elena’s father Douglas (the sonorous bass Simon Orfila) but to no avail.

Director Lluis Pasqual and designer Ezio Frigerio do not try to produce a Lucia di Lammermoor or a type of opera that La dame du Lac is not. They allow conductor Roberto Abbado and the singers to deliver the marvellous music, plot be damned. The set consists of some monumental columns that come apart in the middle to show spectacular views of mountains. Huge chandeliers make sure that you do not mistake the setting for medieval or realistic.

There are a few tricks such as having Elena and King James lowered through a trap door in the middle of the stage. Are they sinking in the lake?

The costumes consist of capes and swords to suggest some heroic age but we also have modern gowns for the ladies and tuxedos for the men. Some of the men appear in tuxedos with capes on their backs. There are no kilts.

The chorus in their tuxes line up across the stage and sing. There is no pretence that they are doing anything else as characters in the opera.

The incongruity of the costumes, the static nature of the opera and the creaky plot are all subsumed in the extraordinary music and singing. The only annoying item is the ballet dancing. For some reason Pascal thought it prudent to allow ballet dancers to perform at various times. Alas, they added nothing to the production and their limited presence was a relief. A five star evening but dock half a star for the silly tricks and the ballet.

La Dame du Lac by Gioacchino Rossini opened on June 14 and ran until July 20, 2010 at the Palais Garnier, Paris. http://www.operadeparis.fr/
Posted by James Karas at 9:47 AM