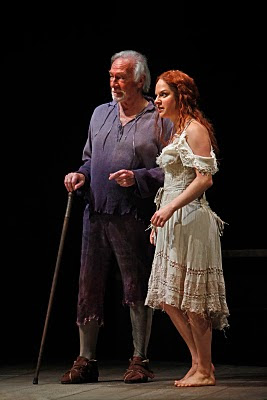 Christopher Plummer as Prospero and Trish Lindström as Miranda. Photo by: David Hou

The Stratford Shakespeare Festival unleashed its star power last Friday with the opening of The Tempest starring Christopher Plummer. Even though the Festival opened three weeks ago, this opening was treated with all the hoopla of a season curtain raiser. I need hardly add that Plummer is featured on all the posters and the season programme.

Plummer did give a grand performance as Prospero even though the production as a whole did have some issues. It is directed by the Festival’s Artistic Director, Des McAnuff and it bears his imprimatur.

Plummer can speak a line of poetry and McAnuff has him deliver Shakespeare’s iambic pentameters in a measured tone, squeezing the juice out of every word, pausing, reacting to the other characters and even getting laughs. Plummer’s Prospero, the deposed Duke of Milan who was tossed on a desert island, is a grand old man, kindly, despotic, full of magic tricks as well as a bit of a tyrant towards, let’s say, the natives.

The other notable and quite extraordinary performance came from Julyana Soelistyo as Ariel. We expect and want Ariel to be nimble, ethereal, almost a spirit – in fact she is a spirit. Our wishes are not always fulfilled. Soelistyo is one of the best in that role. She is a petite woman giving the part immediate physical credibility. She has a melodious, child-like voice, moves almost like a spirit and gives a wonderful performance.

Bruce Dow as Trinculo the jester and Geraint Wyn Davies as the butler Stephano practically steal the show with their simply hilarious antics. Trinculo is an overdressed and overweight gay man while Stephano is a Scottish drunkard. They take advantage of all the comic possibilities of their scenes with hilarious results.

The slave Caliban is half human and half reptile and he slithers around and plots the over throw of Prospero. An outstanding performance by Dion Johnstone. Trish Lindstrom is an appealing and well done Miranda and ditto for Gareth Potter’s Ferdinand.

There are a large number of touches that a director brings to every production in order to make it his own. McAnuff emphasizes the humour of the play and I have never heard that many laughs from the scenes that involve Prospero. A pause, a look, an intonation are the means that McAnuff uses to evoke laughter and most of the devices work.

The real issue with the production is the pace. The deliberate delivery of Prospero’s lines may be quite suitable for the old duke but McAnuff has just about everyone speak so slowly and deliberately you feel that you are in a class of English for beginners. The advantage of lines being spoken clearly and enunciated precisely is that you do get to understand them all. The disadvantage is that most people do not speak at that speed and it would be preferable for a character to speak more quickly and with greater feeling rather than emphasizing almost every word as if all lines are of equal value. Get it moving.

At the opening of the play, Ariel descends from the ceiling as if swimming under water and upon reaching the stage unleashes the storm. Well done. Then we see Prospero and Ariel on stage, in the audience, and up above. Miranda is looking for her father during the storm that will wreck the ship carrying the usurping Duke Antonia (John Vickery) and the King of Naples (Peter Hutt) and their followers. This is not a bad device but Shakespeare simply forgot to write the words that Miranda and Prospero speak during the scene. He also forgot to tell us that the two are directly affected by the storm instead of, perhaps, just watching it. Shakespeare needs first rate directors and he can do without collaborators.

Stephen Russell is in his 28th season at the Festival. He is very talented actor and used to get major roles. In this production he is given probably the worst role in the play, that of the Master of the Ship. He gets several lines at best. He is considered good enough to be Plummer’s understudy but why such talent is wasted remains a question to be asked and some day maybe even answered.

The Tempest by William Shakespeare opened on June 25 and will run until September 12, 2010 at the Festival Theatre, Stratford, Ontario. www.stratfordfestival.ca 1-800-567-1600
Posted by James Karas at 9:48 AM