FOR THE PLEASURE OF SEEING HER AGAIN AT STRATFORD FESTIVAL 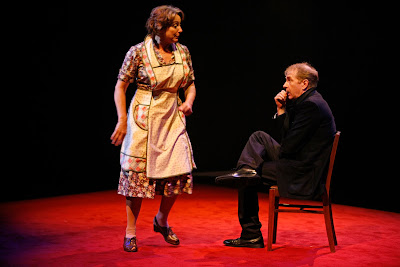 Lucy Peacock as Nana and Tom Rooney as the Narrator. Photo by: David Hou
Reviewed by James Karas

Michel Tremblay’s For the Pleasure of Seeing Her Again is one of those deceptively simple but theatrically marvelous plays, that, done by the right actor, is a sheer delight and a memorable experience. Stratford has struck gold in this pitch-perfect production at the Tom Patterson Theatre with Lucy Peacock and Tom Rooney.

The 1998 play is a celebration of the wild imagination, of sheer theatricality and histrionic humour of a woman called Nana. And that’s just the beginning. It is also the homage paid by the playwright to his mother, a working class woman who becomes Everywoman.

We see Nana during five stages in her life, all of them involving her son who is also the Narrator of the play. We see Nana and her son when he is ten years old and go through the stages of his growth until age 20. By that time Nana has grown old and ill and she is about to die.

The role of the Narrator and the son at different stages of his growth is not a bad one and Rooney does excellent work with it. But he is completely overshadowed by the exuberant and melodramatic Nana. Tremblay wanted a play about his mother, I suppose, and he put himself in it to showcase her and not himself.

Nana is a role to be craved for by an actor who can be funny, outrageous, moving and loving. Lucy Peacock has all those qualities and her Nana is such a bravura performance that a standing ovation seems like meager praise.

Who is Nana? When her 10-year old son throws a chunk of ice under the rear wheels of a car, the driver stops fearing he has hit a child. The policeman knocks on the door and she learns of what has happened. Nana’s imagination and tongue go into over-drive as she blasts her son for what he had done. But what she imagines could have happened is not remotely connected to reality or the laws of probability. Her outbursts are simply hilarious.

Nana is an avid reader of fiction and so is her son. The two engage in discussions of romantic fiction that is both astute and simple. It is also funny. The discussions and arguments are, of course, food for the developing imagination and talents of her impressionable son who we know will become a writer.

Nana brings much more than her family on the stage. She deals with Canada and Europe in the bargain. The origins of nobility and royalty, their “blue blood” and the peccadilloes of her family are all fodder for her tongue and imagination. But they are more than that; for Nana humour and melodrama are tools for survival and she knows it. When she makes a comic narrative of her sister-in-law’s death she knows that she is doing it in order to escape reality.

Unfortunately reality pursues Nana with its usual cruelty and she becomes fatally ill. In one of the most moving descriptions of approaching death, Nana describes the pain from the cancer in her stomach and likens it to the pain of pregnancy and giving birth. It is an extraordinary juxtaposition.

In the end the theatrical Nana is given a thoroughly theatrical exit by the son that she nurtured. He writes an exit for her on angels’ wings. Nana’s death, like the rest of the play, is an amazing coup de theatre that provides a great night at the theatre.

For the Pleasure of Seeing her Again by Michel Tremblay continues until September 26, 2010 at the Tom Patterson Theatre, Stratford, Ontario. www.stratfordfestival.ca 1-800-567-1600
Posted by James Karas at 11:08 AM