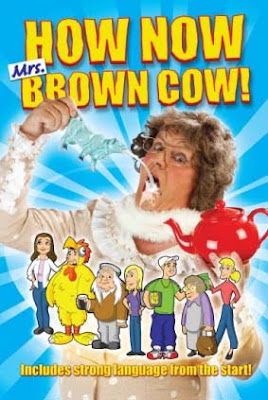 How Now Mrs. Brown Cow is an exuberant and wacky comedy that had most people in the audience laughing until they had tears in their eyes. It is the creation of an Irishman named Brendan O’Carroll, who wrote it, directs it and stars in it. Before I say more about the show, a few words about O’Carroll.

O’Carroll is one of those comic geniuses that can produce laughter at will and keep an audience in the palm of his hand for hours. He writes hilarious one-liners that are given to colourful characters (but mostly to himself) and he creates a plot of sorts to showcase his innate comic talents. He uses a good deal of profanity, a lot of physical comedy and creates situations that have the audience screech with laughter. He can do How Now Mrs. Brown Cow as a standup comic or use another ten actors. By the way, according to O’Carroll, this is the fifth play in the Mrs. Brown Trilogy!

O’Carroll plays Mrs. Brown, a working class Irish widow with five children. She is sarcastic, rude, crude and in her way a doting mother. The funny lines come at almost machine gun speed and they are quite good. The plot that supports the cracks has three strands: Mrs. Brown has a son in Boston and she is expecting him to come home for Christmas. He has told his sister Cathy (Jennifer Gibney) that he will not come home but no one wants to pass the bad news to Mrs. Brown.

The other plotline is the mysterious phone calls Mrs. Brown is getting from a firm of solicitors. They specialize in adoptions and her children are wondering which one of them is adopted.

The third plot strand is about what part Mrs. Brown will get in the Nativity Show being put on by her church. She wants to play the Virgin Mary! There are other incidents to be sure but they are all used to the same effect: clotheslines on which to hang hilarious verbal and physical gags.

Mrs. Brown has the requisite colourful family as butts for her jokes and as gag makers themselves. Her son Rory (Rory Cowan) is gay and he had a tiff with his partner Dino (Gary Hollywood) and their apartment was flooded. How? Well, Rory handcuffed Dino to the radiator and, a flood ensued, I guess.

Her son Dermot (Paddy Houlihan) is working as a penguin. He is trying to get his good friend Buster a job in the same line. Buster must be interview for the job but his only experience in that regard is being interviewed by the place – many times.

Mrs. Brown also has a wacky neighbor Called Winnie (Eilish McHugh) and an even wackier grandfather (Dermot O’Neill) who is deaf and jumps out of his bedroom window when he hears the word fire.

This is verbal and slapstick farcical comedy and it does not pretend to be anything else. If this is not your cup of tea, go somewhere else. Perhaps the review should end here but there are a few things that are deserving of comment. The set consists of a kitchen and a living room but it seems to have been constructed for a much smaller stage. It is plunked in the middle of the huge Canon stage and it clearly should have been larger to fill the space.

All of the actors were loudly miked. It is bad enough in a musical, but the use of microphones in a comedy is unacceptable. We go to watch live theatre.

O’Carroll and his cast go over the top and in a comedy of this type it is de rigueur but there is such a thing as going over, over the top. Almost all of them step out of character in order to get laughs. Dino breaks up laughing out of character and at first it seems like an uncontrollable outburst. He does not stop and repeats it on his next appearance. If he in fact stepped out of character briefly, it would be highly unprofessional and perhaps forgivable. If he is unable to stay in character, as Hollywood seems to do, then we can only hope for his sake that it is intentional. When most of the characters do it, it becomes a source of annoyance rather than pleasure.

How Now Mrs. Brown Cow by Brendan O’Carroll opened on August 19 and will run until September 4, 2010 at the Canon Theatre, 244 Victoria St. Toronto, Ontario. www.mirvish.com
Posted by James Karas at 10:35 AM