THE LAST DAUGHTER OF OEDIPUS WITH SWORDS AND SHIELDS IN CHICAGO 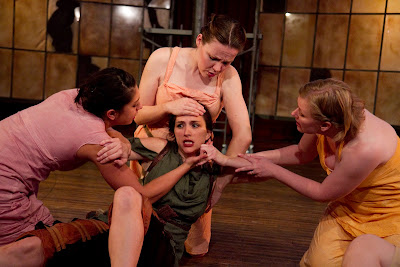 Babes with Blades is the rather racy name of a theatre company in Chicago that, according to its website, “showcases the strength, vitality, and proficiency of women in the art of stage combat”. It tells us that it is the only such company in the Windy City. How much room is there for such troupes?

Whatever the need, the company is true to its word because the actors show immense ability in staging fight scenes with dexterous use of swords, shields and staffs. I am happy to add that despite their stated mission, fighting on stage is not the sole reason for going to see them. The warning printed in large fonts in the programme that “This production contains realistic staged violence” is more appropriate to cheap television than live theatre.

What attracted me to see their current production was the tile of the play, The Last Daughter of Oedipus and, of course, the subject matter. Who can resist another visit to the cursed Royal House of Thebes!

Ismene is the daughter of Oedipus and the more famous Antigone’s older sister. She appears in Sophocles’ Theban plays (Oedipus Rex, Oedipus at Colonus and Antigone). In the latter play she is the one who is willing to compromise. Given the choice between obeying King Creon’s edict and a higher duty to provide her brother with burial rites, she chooses the former. Antigone, of course, is prepared to sacrifice her life in obedience to the unwritten law that imposes a duty to bury a brother rather than leave him exposed to the dogs. Antigone dies; Ismene survives.

Jennifer L Mickelson’s new play starts after the death of Antigone and we meet Ismene wracked by her conscience for not following her sister to her death. She in fact wants to, but Antigone rejects her. Her uncle King Creon is equally tortured by his conscience because he lost his son Haemon who was engaged to Antigone and died with her.

Ismene is having nightmares and she is visited by her mother Jocasta (Moira Begale) and by a self-assured, rather sassy Antigone played well by Sarah Scanlon. Jocasta had unwittingly married her son Oedipus who had murdered his father Laius. This family is seriously cursed.

Ismene goes to Athens to seek the help of King Theseus who has already set off for Thebes. She decides to go to the Oracle at Delphi to seek the advice of the oracle in order to expiate her family’s curse.

Mickelson provides a fairly straightforward text of Ismene’s confrontation with Creon, her nightmares and her escape to Athens where she confronts Athenian women who are connected to the soldiers that have gone to Thebes with Theseus. Ismene, accompanied by her servant Zeva (a very good Eleanor Katz) then goes to Delphi where she confronts the guards and enters the temple to seek the advice of Apollo.

The actors range from the competent to the excellent in delivering the text. Kimberly Logan as Ismene has an expressive face and she presents the troubled main character with strength and sensitivity. Michael Sherwin as Creon (and a guard) is conscience-stricken and blustering as becomes a usurper of power. The rest of the cast presents excellent ensemble acting with minor slides into comic business.

What takes the production out of the ordinary is the presentation of the fight sequences and the nightmares. Ismene is approached by figures who crawl frightfully towards her with faces covered. She is terrified and lashes back. Very effective scenes.

The fight scenes are the specialty of the company. Staffs, swords and shields are used with masterly efficiency and utter theatricality as Ismene and her companions – all women – confront men and other women.

Ancient Greek drama contained singing and dancing but fighting on stage was not a prominent feature, to say the least. Mickelson and Babes with Blades seem to have found a new method of searching for a solution to the mystery of the curse of the house of Oedipus.

The production credits a director (Tara Branham), a Fight Choreographer (Libby Beyreis) and a Movement Director (Mercedes Rohlfs). This is a amazing and original approach to theatre and ancient myth done with a minimum of stage props.

Live theatre is the marriage, indeed symbiosis, of audience and performers. The reaction of the audience can be almost as energizing as the actual acting on the stage. Equally, the reaction of the spectators can energize the actors to stellar heights of performance. But it cannot be done without an audience.

The performance of The Last Daughter of Oedipus that I saw was attended by four people. There are ten actors in the cast. I mention this not as a criticism but as an unalloyed compliment to the actors. They were unaffected by the empty seats and performed as if they had a full house. Bravo!