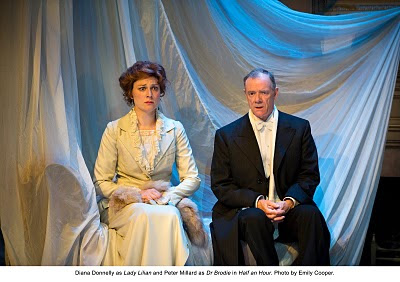 The one-act play is a special theatrical creature. It needs a rabbit start and must achieve and maintain speed throughout. It has to take quick turns and reach a climax and proceed to a denouement without losing its balance or veering into improbability.

Most playwrights have written one-act plays but opportunities to see them are relatively rare. The Shaw Festival is an exception in this regard because it produces at least one production of a one-act play every year, even if it is during lunchtime. Last year they broke all records by producing all ten one-act plays that make up Noel Coward’s Tonight at 8:30.

This year’s offering is J. M. Barrie’s Half an Hour, a gem of a play in a terrific production at the Royal George Theatre. As the curtain rises, the actors strut around the stage like marionettes. A reminder that we are all subject to the vagaries of Fate? Perhaps.

Then Barrie steps on the gas and we meet Lady Lilian (Diana Donnelly) and her husband Richard (Peter Krantz) in the middle of a row. He is rich but without status, she is beautiful, blue-blooded and poor. In a perfect commercial exchange, he marries her for her looks and status and she marries him for his money. The marital brawl indicates that the merits of the conjugal union were better in the contemplation than in reality. In short they are stuck with each other.

Not quite. Lady Lilian takes off her emerald necklace and her wedding band and bolts to her poor lover Hugh Paton (Gord Rand) and the two lovers in a fit of romantic and passionate abandon, prepare to flee to Egypt. Hugh rushes out to find a taxi and Fate strikes him dead! Alright, it was motor vehicle but the result was the same.

To make a short story short, Lady Lilian goes back to her husband!

Donnelly is the perfect Lady Lilian; tall, beautiful, classy and very practical in the end. When escape is impossible, noble retreat is available and she takes it. Peter Krantz is superb as her husband; he can make money but he cannot make a woman happy. Peter Millard does a very good job as the doctor who happens to witness the accident and has to report it to Lady Lilian. A few minutes later he is at her house as a dinner guest. There is a situation that requires some delicate maneuvering as he and Lady Lilian conceal a very dramatic secret.

Half an Hour is as good as its title chronologically but, like some fine wines, its fine taste lasts for a long time. Go see it.

Half an Hour by J. M. Barrie continues until October 9, 2010 at the Royal George Theatre, Niagara-on-the-Lake, Ontario. www.shawfest.com.
Posted by James Karas at 11:38 AM