Théâtre français de Toronto stands at the helm of francophone theatre in Toronto and it is fitting that they produce a play that stands at the forefront of absurdist drama, Eugene Ionesco’s La Cantatrice Chauve (The Bald Soprano). They give it a fine-tuned, beautifully acted and superbly directed production that takes you into the theatre of the absurd with all its absorbing features, humour, non-linear plot and, well, absurdity.

We have Mr. and Mrs. Smith, an English couple in an English suburb discussing their supper and other inconsequential and nonsensical subjects in their English home. Director Chanda Gibson has Manuel Verreydt as Mr. Smith and Genevieve Langlois as Mrs. Smith walk on stage in a stilted, unnatural almost robotic manner. They speak almost mechanically without sounding robotic but at all times we will be aware that we are not in a normal world as we perceive it. 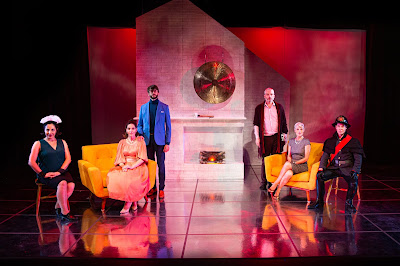 Christina Tannous, Sophie Goulet, Pierre Simpson, Manuel Verreydt, Geneviève Langlois,
Sébastien Bertrand_Photo_Théo Belnou
The same applies to their visitors Mr. and Mrs. Martin played by Pierre Simpson and Sophie Goulet respectively. They arrive together and we assume that they are a couple but they proceed to converse as if they are complete strangers. The conversation continues until they discover that they live in the same room, sleep in the same bed and have a little girl. The encounter is funny, ridiculous and, again, from another world.

Mary the maid (Christina Tannous) strikes a gong a few times during the performance (the text calls for a clock) and is the audience’s informant. She gives us “the facts” about Mr. and Mrs. Martin. The Smiths join the Martins and the nonsense continues as they relate extraordinary occurrences like seeing a man tying his shoelaces and somehow reading a newspaper.

The set designed by Alexandra Lord features a room with a fireplace and a few chairs. There are two doors on each side of the playing area and the whole thing works very well. 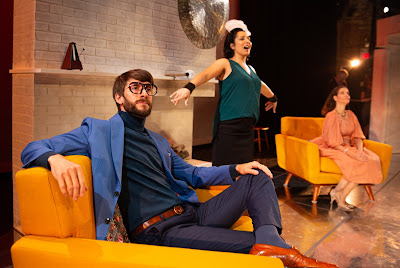 Pierre Simpson, Christina Tannous. Photo -Théo Belnou
Theatre of the absurd is by definition something that is neither linear nor rational but in its nonsense it can be funny and to some extent incomprehensible. But its incomprehensibility is precisely the point of the play and you get to understand that it is the whole point of the play.

The strength of this production is Chanda Gibson’s ability to balance the nonsensical and the ridiculous with the comical and the serious. We may not follow all that is happening on the stage but we know we are not supposed to and that we understand what Ionesco and this superb production intend to do.

The play is produced in the original French with English surtitles making it available for a wider audience.
__________
The Bald Soprano (La Cantatrice Chauve) by Eugene Ionesco opened on October 23 and will run until November 3, 2019 at the Berkeley Street Theatre Upstairs, 26 Berkeley Street, Toronto, Ontario. www.theatrefrancais.com

James Karas is the Senior Editor - Culture of The Greek Press
Posted by James Karas at 12:59 PM