Federico Garcia Lorca’s Blood Wedding is set in rural Spain and is about blood feuds, and cycles of murder and revenge that reach back to Greek mythology and the House of Atreus. It is also the story of a young man who is about to marry a woman who loves another man. The bride runs off with her lover after the wedding and the jilted groom pursues them.

Playwright Marina Carr has adapted the play for the Young Vic and with director Yael Farber they have given us their own version and interpretation. Lorca did indeed include echoes of Greek tragedy in his play and Carr and Farber increase those echoes. The most important echo if you will is the expansion of the role of the Moon. The Moon played by singer Thalissa Teixeira appears in the opening scene and sings several long songs during the performance. Some of the songs are in Spanish and the politest thing I will say is that they added nothing to the production. No doubt she is meant to reflect the Chorus of Ancient Greek tragedy but the attempt is a bust. 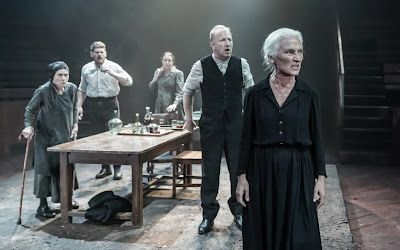 Olwen Fouéré and fellow cast members in Blood Wedding.
Photo:MARC BRENNER
There are two Woodcutters who appear several times carrying axes on their shoulders and they looked as if they made the wrong turn somewhere and ended up on the stage. In the original they discuss the events of the play somewhat similar to the Chorus in Greek tragedy.

The blood feud and depth of the hatreds of these rural people seems boundless. The Mother (Olwen Fouéré) hates the Felix family with immeasurable ferocity and expresses it with total conviction. Her son, the Groom (David Walmsley) wants to marry the Bride (Aoife Duffin) but we are not sure about her conviction and we can see her boorish manners. The characters, by the way, have no names except for Leonardo (Gavin Drea).

Leonardo is married (played by Scarlett Brookes) and he holds a passion for the Bride that would compete with that of Heathcliff’s for Catherine. But he is married and his wife is pregnant with their second child. If that is not bad enough, Leonardo is a brute and a wife-abuser who should be arrested. Carr/Farber make him into a despicable character and Drea does some superbly convincing acting to make him look really loathsome. He may claim to love the Bride but we have nothing but contempt for him and I wonder if that is the right balance for the play.

When Leonardo approaches the Bride, she fights him off quite vehemently and he does nothing less than assault her. The Bride is unhappy about marrying the Groom and is seeking freedom and love that are simply not available or attainable. 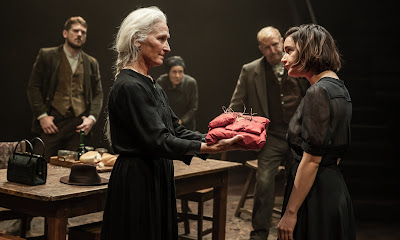 Olwen Fouéré, left, as Mother and cast. Photo: Marc Brenner
The Bride’s father (Steffan Rhodri) gives a powerful performance as a man who lives in a cave on top of mountain, who wants to control everything and has had a dreadful marriage.

Walmsley as the Groom is also powerful in a play that is full of extremes.

One of the enduring images of this poetic play is that of Leonardo riding to the Bride’s home on the mountain on a white steed and running away with her. The marvelous descriptions of this are captured by having Leonard run in circles around the playing area holding a guy wire that lifts him off the ground.

The same wire will lift the moon up for reasons that escaped me.

A powerful production set in Ireland that loses some of its impact by presenting Leonardo as a brute.
__________
Blood Wedding by Federico Garcia Lorca adapted by Marina Carr continues until November 2, 2019 at the Young Vic Theatre, 66 The Cut, Southwark, London. youngvic.org

James Karas is the Senior Editor - Culture of The Greek Press.