Glass, Kill, Bluebeard’s Friends and Imp are four playlets by Caryl Churchill now playing at the Royal Court Theatre in London. They are poetry in prose fashioned in dialogue suitable for the stage. They are interesting, intriguing and opaque which means they are creations in the world of Caryl Churchill.

Glass is a short playlet that has nine characters including “Schoolgirls” played by four actors. The actors are sitting or standing on a small platform that appears suspended in midair above the stage floor. All we see is one narrow side of the platform on a black background. 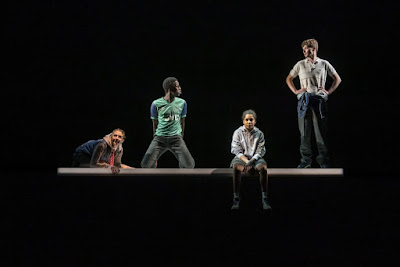 The cast of Glass. Photo: Johan Persson
The central character is A Girl Made of Glass who first appears with her Brother, His Friend and Her Friend. Another character, Mother, appears as well as a Clock, a Red Plastic Dog, a Vase and Schoolgirls. Her Friend discloses a secret to the Girl Made of Glass that sounds awful, but we are not told what it is. The Girl goes to her Friend’s house and the relationship seems to be broken. Eventually, the Girl jumps out a window and is shattered to pieces.

The actors who play all the parts are Kwabena Ansah, Louisa Harland, Patrick McNamee and Rebekah Murrell.

Kill has two actors, Tom Mothersdale representing the gods and a youngster (Caelan Eddie or Leo Rait) representing the people. Mothersdale sits on a cloud and the boy is playing with puzzles on the floor. The god is one or several of the Olympians and he tells us that he does not exist but is something that people made up. He proceeds to relate a detailed account of the myths of the House of Atreus, the Royal House of Thebes and several other branches. Killing and cooking children to be eaten by their father are prominent features of the myths of the two dynasties of Greek mythology and we end up with a good account of them and a lot more.

In Bluebeard’s Friends, four people played by Deborah Findlay, Toby James, Sarah Niles and Sule Rimi talk about the murderous Bluebeard. The speakers are not identified but they tell us that Bluebeard is their friend and that they are horrified that he is dead. Or was he just stabbed numerous times and is still alive?

One of them got the dresses, the bloody dresses, that some of Bluebeard’s victims wore. We see them raised in the background. The foursome continues the conversation. Some of the women deserved what they got. Some were peasants. But he was a charming psychopath and he liked us. What he did was terrible, but he loved beautiful things.

There crosscurrents among the four speakers. The non-sequiturs and the conversation continue for a few minutes and one of them puts on a blue beard and a woman puts on one of the dresses. They are Bluebeard’s friend even if he was terrible. Who are these people? Go figure.

Imp is longer than the other three playlets put together. It has four characters and the action is divided into about a dozen scenes. Dot (Deborah Findlay) and Jimmy (Toby Jones) are a childless couple who are medically unfit. They are misfits who don’t get along or maybe they do. Dot is a nurse who was dismissed for beating up a patient and served some time in jail. 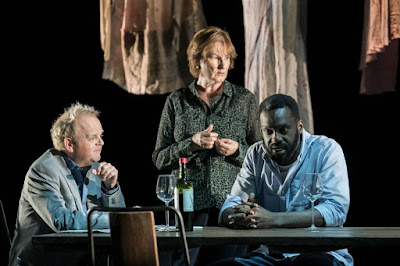 Toby Jones, Louisa Harland and Tom Mothersdale in Imp.
Photo: Johan Persson
We glean information about them as they interact with Niamh (Louisa Harland) a distant Irish relative. They have befriended Rob (Tom Mothersdale) a homeless person who has a brilliant son but is also a liar.  Niamh has a relationship with him and ends up being pregnant. There is plenty of humour but you know you are walking on quicksand. and are never sure of your footing or of what is going on. You are left with the intriguing and opaque situation.

You should not be fooled with any apparent simplicity in any of the pieces. The real story is in the subtext. The god or gods in Kill, for example, are not retelling us Greek myths. The violence, the admitted untruthfulness of the existence of the deities and the blending of disparate mythologies is the real story.

The same applies to Glass, Imp and Bluebeard’s Friends. They are pieces that a first look at them simply begins the process of trying to understand them and Churchill’s complex world.
__________
Glass, Kill, Bluebeard’s Friends and Imp by Caryl Churchill continues  until October 12, 2019 at the Royal Court Theatre, Sloane Square, London, SW1W 8AS.  Box Office 020 7565 5000. www.royalcourttheatre.com


James Karas is the Senior Editor - Culture of The Greek Press
Posted by James Karas at 4:39 PM