TURANDOT – REVIEW OF 2019 LIVE FROM THE MET PRODUCTION

Hot on the heels of Robert Wilson’s production of Turandot for the Canadian Opera Company, Torontonians have the chance to see Zeffirelli’s granddaddy of all stagings at the Metropolitan Opera in New York. Zeffiirelli directed the production back in 1987 but is has been repeatedly revived with different casts and is still going strong.

Zeffirelli produced operas on a grand, magnificent and some would say ostentatious scale. Opera houses with a smaller budget (and that should include just about all of them) could not imagine constructing the sets, designing the costumes and hiring the chorus and extras that the Met does for this Turandot. And it can hardly hire second rate singers. 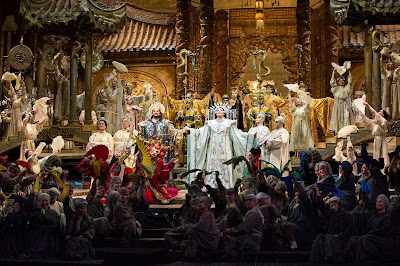 The final scene of Puccini's "Turandot" with Yusif Eyvazov as Calàf and
Christine Goerke in the title role. Photo: Marty Sohl / Met Operaa
The sets, designed by Zeffirelli himself are intricate and colossal. In the opening scene we have the Mandarin (Javier Arrey) reading the law that the pure Princess Turandot will marry only the man of royal blood who can solve the three riddles that she puts to him. If he fails, he will lose his head.

Zeffirelli has massive ramparts viewable in the dark background and masses of people to hear the edict. There is commotion, hubbub, and singing, of course but this is not a simple scene to get the plot going. The mob cries for blood, the Prince of Persia is mercilessly sent to be executed and we have a scene on stage worthy of Cecil B. DeMille.

The first scene of Act II in the private apartments of ministers Ping (Alexey Lavrov), Pang (Tony Stevenson) and Pong (Eduardo Valdes) is almost domestic as they bemoan bloodshed and miss their homes in the provinces.

We then are put inside the imperial palace where we find the old Emperor on the throne and witness imperial grandeur that most emperors could only dream of, but, the Met delivers. The Emperor (Carlo Bosi) in splendid regalia is seated on a gold throne above the rest of the world. There are grand pillars, structures and stairs that fill the stage and dazzle the eye. Turandot appears wearing a huge tiara and a gown studded with jewels. Beautifully gowned ladies are beside her as are guards attired in gold standing beside and below the emperor.

The sages of China in white robes of splendour parade in front and soldiers with masks that make them look menacing are also present.

In such surrounding, singers with big voices and impeccable delivery are a sine qua non and the Met rarely fails to find them. Soprano Christine Goerke has a splendid voice that expresses Turandot’s imperiousness (and nastiness, if you look carefully) but she rises to legendary status as the icy hater of men.

Tenor Yusif Eyvazov makes a powerful and impassioned Calaf who brings the house down with his “Nessun dorma.” Eleonora Buratto as the slave girl Liu is simply splendid with her moving performance and lyrical beauty among the heroics of Calaf and Turandot. James Morris as Timur, approaching his fiftieth anniversary of singing at the Met was met with epic applause by the audience that he certainly deserves.

A scene from Act I of Puccini's "Turandot." Photo: Marty Sohl / Met Opera
Yannick Nézet-Séguin conducted his first Puccini at the Met and the Orchestra and Chorus played outstandingly. Turandot is a truly choral opera and the Met Chorus deserves praise on the same level of recognition as the singers.

I have devoted most of my review to the grandiosity of the production because it represents a style that is from the past and a strong indicator of tastes in New York. The Met has been using it for more than 30 years and it still works. It is opera on a grand scale that may be past its apogee and unlikely to be continued very frequently. But there it is without much thought of changing it. You will recall that there was an attempt to shelve Zeffirelli’s Tosca by Luc Bondy’s staging but it was met with derision from the audience and management had e no choice but to run for cover. It was replaced by a more realistic and palatable to New Yorkers approach by David McVicar.

I have seen this production several times as well as other stagings but it still astounds me with its opulence and magnificence, which combined with the choral, orchestral and vocal splendour defines an era at the Met which may be on its way out.

Franco Zeffirelli died on June 15, 2019.
_______________
Turandot by Giacomo Puccini was transmitted Live in HD form the Metropolitan Opera on October 12, 2019 at the Cineplex Odeon Eglinton Town Centre Cinema, Toronto and other theatres across Canada.  It will be shown again in select theatres on November 2, 4, 6 and 10, 2019. For more information: www.cineplex.com/events

James Karas is the Senior Editor – Culture of The Greek Press.
Posted by James Karas at 8:04 PM