How Love is Spelt is a beautiful play by Chloe Moss that receives a moving, lyrical, sympathetic and meticulous production by Brickdust and Project One at the Southwark Playhouse in London.

The play tells the story of Peta, a girl of twenty who has left her home in the north of the country and gone to live in London. She lives in a tiny apartment consisting of a convertible couch and a couple of other amenities. She meets four people in the play, and we follow her encounters with them with all its humour and pathos.

Larner Wallace-Taylor gives a sensitive and moving portrayal of Peta who is searching for something in a city where she is lost. She discloses information about herself sparingly and sometimes untruthfully. She is dreaming of a career in advertising or fashion design but we have no reason to take these ambitions as anything but wishful thinking. 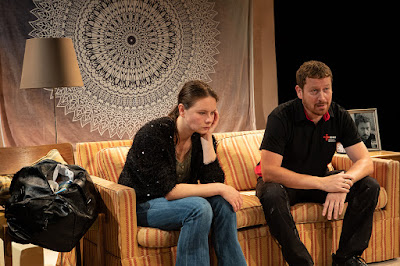 Larner Wallace-Taylor and Nigel Boyle. Photo: Ali Wright
Peta is sympathetic and empathetic with the people that she meets but no one is able to provide her with what she is searching for. Wallace-Taylor is an expressive actor but she also reacts and responds to the other actors attentively and movingly. Your attention may be drawn to the speaker but you should also watch her facial expressions and body movements to understand the situation. A wonderful performance by Wallace-Taylor.

The first person we see Peta with is Joe (Benjamin O’Mahony), a muscled stud whom she met at a bar and slept with. The muscles in his arms do not stretch to his head and he talks compulsively revealing that he is shallow and full of himself. His first illiterate concern is to get confirmation that his performance in bed was good. We learn some things about Peta especially in the end when he tries to force himself on her and leaves with excruciating pain in his testicles. Excellent performance by O’Mahony.

Peta’s second date is Steven, a pathetic teacher who also talks compulsively. He is a misfit who is unable to have a meaningful relationship. He talks about himself incessantly describing a pathetic human being - himself. Peta’s sympathy and empathy for him do not reach him and he skulks out of her apartment. Steven is played very well by Duncan Moore.

Peta meets Chantelle, a young, modern woman of the city who is out to have fun. When we meet her in Peta’s apartment she is vomiting her head off because she drank far too much and has the inevitable hangover. She is as much a misfit from a broken family as Peta. Kudos to Yana Penrose for fine acting. 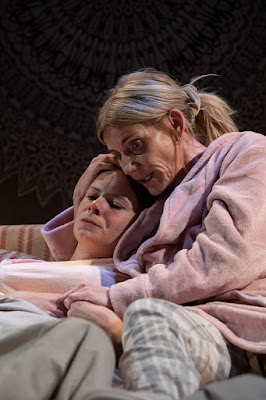 Larner Wallace-Taylor and Michelle Collins, Photo: Ali Wright
Peta returns from the bar drunk and she falls down the stairs. She is rescued by Marion (fine and sympathetic acting by Michelle Collins), a middle-aged woman who has the soul of a saint in her attempts to help Peta. She smokes and talks continuously about helping Peta and her pathetic life. She comes from a broken home and is another pitiful human being, another misfit that comes into Peta’s life.
Throughout the performance we see a black and white photograph of a man prominently deployed on Peta’s bedside table. She lies about him to her visitors but in the final scene he comes to her apartment. He is Colin (Nigel Boyle) the man she left behind when she ran off to London. He speaks haltingly as the two try to make emotional contact. It is not easy for them but their love comes through and if they can’t express themselves they at least know how to spell the word.

Kudos to director Charlotte Peters for sensitive directing and to Georgia de Gray for the effective set.

The play was first produced in September 2004 at the Bush Theatre in London and this is its first revival.
___________
How Love is Spelt by Chloe Moss played until September 28, 2019 at the Southwark Playhouse, 77-85 Newington Causeway, London https://southwarkplayhouse.co.uk/

James Karas is the Senior Editor - Culture of The Greek Press
Posted by James Karas at 11:23 PM