Who are the two ladies in Nancy Harris’s new play titled, well, Two Ladies? Well may you ask and if you know nothing about the play, it may take you several minutes to recognize them. One of them is attractive, brilliant, sophisticated, the wife of a president who is much, much younger than her and she is? Yes, she is Helen, played brilliantly by Zoe Wanamaker.

The other lady is a beautiful, slim, statuesque woman, a former model, referred to as the First Lady. Right again. She is Sophia played by the beautiful …. Zrinka Cvitesic. If your wandering mind led you to Madam Macron and Melania Trump as possible models for Helen and Sophia, control yourself. Accuracy is not everything. 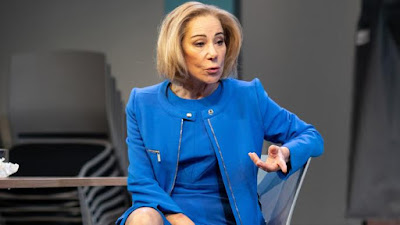 Zoë Wanamaker in Two Ladies. Photograph: Helen Maybanks
The two ladies are attending an important summit conference in France where their husbands along with other leaders are deciding whether to retaliate against a country that has killed Americans and attacked American cities. The bellicose president wants to retaliate. Will Helen’s husband support him?

Let’s get back to the ladies in the hotel room where they are basically sequestered. Some protester has thrown red blood, a lot of red blood on Sophia’s gorgeous Chanel suit. Everyone is mortified and there is a scramble to do something about the attire of the First lady.

The two will engage is some very interesting banter that will be politically interesting, but much more fascinating in the details we find about the women and their husbands. The French president has a mistress? Big deal, you say, has there been a French president who did not have a mistress? But wait. This mistress is in the cabinet and she is pregnant and she may be at the conference in some back room with the president and Helen can’t get to him. The pregnancy is not the issue. They are French and civilized and a press release is ready admitting the whole affair.

Sex of various varieties is mentioned for our amusement but we are sure of the most important world issue at hand: Helen’s husband will not budge from his principle of no war and he will not support for the war-mongering American leader. 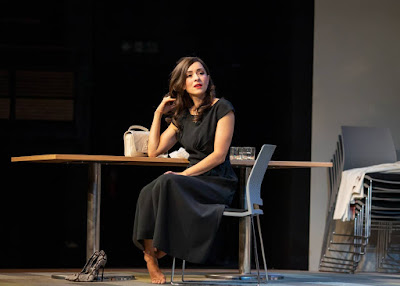 Zrinka Cvitešić in Two Ladies. Photograph: Helen Maybanks
The play is highly entertaining. There are good plot twists, interesting revelations and varied pace. Sophia is very good to look at (we have established that) but she is also very astute and knows more than she lets on. We know that Helen is brilliant but her certainty, indeed conviction, that her husband will sail through the fact of his mistress’s pregnancy and will NOT support the American president may be on shakier grounds than she can possibly conceive.

One more fact. Sophia carries a bottle of Chanel No. 5 in her dainty purse which is in fact a powerful poison – the perfume, not her purse. One drop of it in the event of necessity and you are dead, dead, dead. The ladies feel betrayed, ignored and abused and they think that one way of wreaking vengeance on their husbands is by taking a swig of Sophia’s Chanel 5.

That is a toughie and how this enjoyable if somewhat creaky play about politics, women’s rights and current events will end cannot be disclosed.

James Karas is the Senior Editor - Culture of The Greek Press
Posted by James Karas at 9:39 PM