Girl from the North Country presents an interesting and original marriage of a dramatic play by Conor McPherson with the songs of Bob Dylan. The originality lies in the blending or weaving of the songs into the plot of the play naturally and seamlessly. You will hear some twenty of Dylan’s songs or parts of them but they are sung as integral parts of the play and not as stop-the-show performances and applaud-at-the end.

The other interesting aspect of the musical is the fact we are watching the broadcast of a radio play. In the opening scene, Dr. Walker (Ferdy Roberts) steps up to an old-style microphone and announces that that tonight’s story takes place in a guesthouse in Duluth, Minnesota in the winter of 1934.  He takes the microphone several times during the performance as a character and an omniscient narrator.

The characters who sing also step up to the microphone to perform despite the fact that this is not a concert of Dylan’s hits. McPherson, who also directs the show, calls the musical "a conversation between the songs and the story." 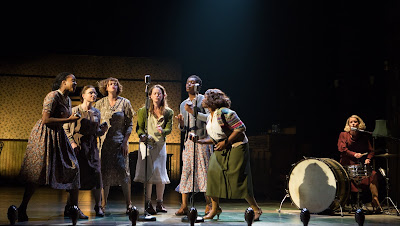 The cast of GIRL FROM THE NORTH COUNTRY.
Photo by Cylla von Tiedemann, 2019.
Songs can express what the characters cannot, or describe their true feeling despite what they say. For example, when Katie (Gemma Sutton) leaves Gene (Colin Bates) to marry someone else, they part haltingly and then express their true feelings in the song “I want you.”

The plot that McPherson has crafted is an old-style story about a number of people in a run-down guesthouse during the Depression. But this is no Annie and there is no millionaire Mr. Warbucks. Nick Laine (Donald Sage MacKay) owns the guesthouse. He is broke, about to be foreclosed on by the bank, has a wife with dementia, a rebellious, loser, dreamer of son (Gene played by Colin Bates) and an adopted pregnant daughter. Not to mention the guilt he carries from childhood which is important.

Marianne (Gloria Obianyo), Nick’s adopted daughter, is 19, black, pregnant and refuses to disclose the name of the father. Nick wants her to marry Mr. Perry (Sidney Kean), a shoe mender and a good man in his late sixties. He proposes marriage and she sings the song with the refrain “Has anybody seen my love” and refers to Madame Butterfly, another young girl who was impregnated and abandoned.

Nick’s wife Elizabeth (Katie Brayben) in addition to being demented speaks of her promiscuity and has other issues.

Reverend Marlowe (Finbar Lynch) sells bibles.  Joe Scott is a boxer who did three years in a penitentiary and is now living under bridge and hoping to make a comeback. Mr. and Mrs. Burke (David Ganly and    Anna-Jane Casey respectively) have their share of troubles including serious financial and marital difficulties and their son Elias (Steffan Harri) who is a grown man with the mental capacity of a child. His fate is worthy of attention. 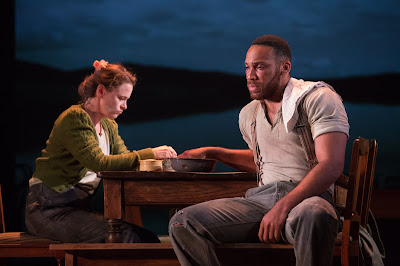 Katie Brayben and Shaq Taylor in GIRL FROM THE NORTH COUNTRY.
Photo by Cylla von Tiedemann, 2019.
The interwoven and often tragic stories of the play are drawn with McPherson’s masterful hand and the play alone is worth seeing. Dylan’s songs add a significant layer of subtlety and drama that take the play well out of a good drama.

The performances of the cast are praiseworthy for their depth and variety. They are performing a part in a drama and they also have to step up to microphone and sing. The musicians are on the stage and the set designed by Rae Smith is appropriate without being overladen. After all we are watching a radio play being broadcast from a rundown guesthouse and the impression of the latter is sufficient.

James Karas is the Senior Editor - Culture of The Greek Press
Posted by James Karas at 11:55 PM