Soulpepper delivers an outstanding production of A Streetcar Named Desire that is unfortunately marred by the annoying addition of a band and hokey set design. It has a superb cast that brings out the pathos, delicacy, brutality and fragility inherent in the lives of the characters with unfailing sharpness and sensitivity.

You cannot have a successful production of A Streetcar without a convincing Blanche Dubois and in Amy Rutherford Soulpepper has found one of the best. Blanch is a complex character. She is or would like to be a beautiful, cultured and sophisticated Southern belle, raised in a world of wealth and gentility on a large plantation. 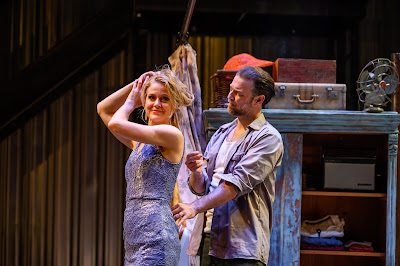 Amy Rutherford and Mac Fyfe. Photo: Dahlia Katz
Rutherford as Blanch still retains some of her beauty but she is past her prime and her attractiveness is best seen in the dim light. She is broke and her furs and clothing that she so cherishes are pathetic imitations which confer no status but bespeak her pretentiousness in her dire straits. She is forced to put on airs and lie about herself. More sinisterly, she is a sexual predator with a weakness for young boys. All of this has resulted in total degradation to the extent that she has had to sell her body to survive. Rutherford has had to project all of these characteristics and she does so with conviction and total success. A marvelous performance.

Williams has provided Blanche’s opposite in her sister Stella played splendidly by Leah Doz. At first blush Stella appears like an abused, downtrodden wife living in a slum in New Orleans. We learn however that she is a woman of considerable strength who is deliciously in love with her husband Stanley and has found contentment in her situation. She sees through her sister and tries to support her emotionally and financially. Doz gives us a sympathetic, strong, attractive and decent Stella. Superb performance.

The man between the two sisters is Stella’s husband Stanly played by Mac Fyfe. With his card-playing friends, he is loud and obnoxious. Blanche has a whole array of adjectives to describe him which amount to him being an uncouth, crude, disgusting man. Indeed he is a Neanderthal. His redeeming feature is that he loves Stella and she loves him and their sexual attraction is a major factor in their relationship. This is the person that Fyfe needs to convey and he does with passion and conviction. 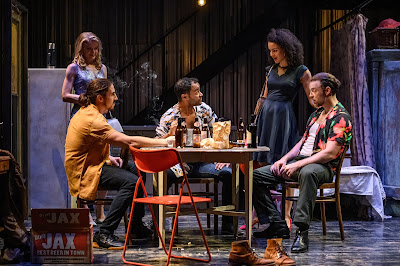 Amy Rutherford, Sebastian Marziali, Lindsay Owen-Pierre,
Leah Doz, and Mac Fyfe. Photo: Dahlia Katz.
The other major character is Mitch played by Gregory Prest. He is the soul of decency, still a bachelor and devoted to the care of his mother. Blanch sees her opportunity for a harbour in him and he sees a decent woman for himself. He finds out that he has been grossly misled by Blanche and runs away. A highly sympathetic portrayal by Prest.

I have nothing but praise for the rest of the cast but they are largely supporting characters for the main conflict among the four main people in the play.

The set by Lorenzo Savoini begins with aluminum siding covering the three sides of the stage. I am not sure what it is supposed to convey but it could easily be a warehouse. Stanly and Stella’s apartment with its small living room area where the men play cards, the curtain that separates it from the bedroom with its prominent bed is satisfactory.

Director Weyni Mengesha does a superlative job in directing the production but I am not sure about the addition of a band on stage. There is room for music in A Streetcar and the script provides for it but when a panel of the stage is removed and a band appears we have moved far from Williams’ play. No doubt there was some thinking behind the introduction of a band on stage but the rationale escaped me.
Forget the band and go see an extraordinary production of a great play.
_________
A Streetcar Named Desire by Tennessee Williams continues until October 27, 2019 at the Young Centre for the Performing Arts, 55 Tank House Lane, Toronto, Ontario, M5A 3C4. www.soulpepper.ca.


James Karas is the Senior Editor - Culture of The Greek Press.
Posted by James Karas at 12:08 AM