THE JUNGLE – REVIEW OF NEW PLAY BY MacMAHON & McKECHNIE AT TARRAGON

Can you succeed with a 90-minte play the first hour of which is taken up largely by a lecture on Marxist economics?

Anthony MacMahon and Thomas McKechnie have done it with their new play The Jungle that is now playing at the Tarragon Theatre’s Extra Space.  The play is highly entertaining, funny, moving and, yes, informative. It is shamelessly political and thoroughly Canadian and in fact Torontonian. 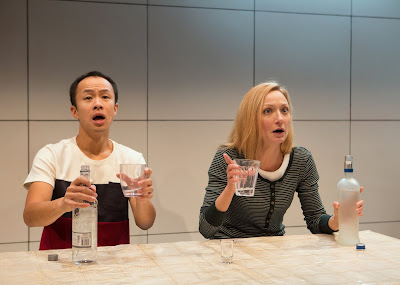 Matthew Gin and Shannon Currie. Photo: Cylla von Tiedemann
The Jungle has two parts. One is the straight, illustrated lecture about economics tied to present day conditions of workers and their employers. The other part is the story of Veronyka (Shannon Currie), a young Moldovan immigrant and Jack (Matthew Gin) a Canadian of Chinese origin.

She is in Canada illegally and has a protector who finds her work under the table and takes a chunk of her pay. Jack is a taxi driver struggling to make ends meet and advance his education. They fall in love, get married to regularize Veronyka’s status and find it increasingly difficult to survive as workers.

There is no shortage of comedy as Chinese and Moldovan attitudes about life and money clash. Veronyka’s family is desperately poor but Jack’s parents invite them to visit Canada and in fact pay for their tickets. They come and Jack’s parents, quite reasonably, ask that they put up the down payment for their children to buy a house. That is out of the question, of course, and there is the inevitable blow up. 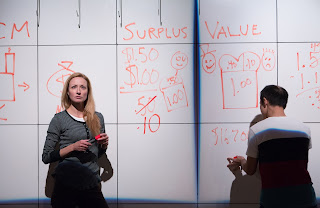 Shannon Currie and Matthew Gin. Photo by Cylla von Tiedemann
Currie and Gin stop being Veronyka and Jack and step back to the white board at the back of the playing area and using red markers illustrate the Marxist theory of the value of work and bring it up to date. To no one’s surprise, one hopes, it is no secret that the business owners, from small enterprises to the huge multinationals, make the money and their focus is on reducing the cost of making it.

They give us some startling statistics including the fact that in 2017 82% of the wealth generated in the world went to 1% of the population. Try to digest that. Not surprisingly, the rich are getting richer and the poor are getting nowhere for the simple reason that the rich decide government policy. As someone observed about The United Sates, it has the best Congress that money can buy.

MacMahon and McKechnie weave the personal story of Veronyka and Jack with the political message intelligently and entertainingly. Their personal story is interesting as they try to get out of their situation as things are getting worse. Parents get ill, political ambitions are involved and we follow almost current events as an election approaches and Jack is deeply involved in campaigning.

The end is ironic and thought provoking.

Currie does a wonderful job as the attractive émigré who switches from a Russian accent to unaccented English. Gin is excellent as a modern Canadian who has to follow old Chinese customs. Superb performances, well directed by Guillermo Verdecchia.

The set by Shannon Lee Doyle is functional for the numerous scenes. The kitchen and living room, the two chars for facing the audience and the white backdrop for illustrating their lecture, all work very well.

And you thought economics is boring! Go see The Jungle.
_______________
The Jungle by Anthony MacMahon and Thomas McKechnie continues until November 3, 2019 at the Tarragon Theatre, Extra Space, 30 Bridgman Ave. Toronto, Ontario.  www.tarragontheatre.com

James Karas is the Senior Editor - Culture of The Greek Press.
Posted by James Karas at 12:39 AM