It is difficult to imagine a more dramatic, subtle and brilliant portrayal of South African racial relations than Athol Fugard’s ‘Master Harold’…and the boys. Master Harold is a white boy, barely in his teens. The “boys” are grown men who work in his mother’s tea room. The title alone tells a great deal. But there is much more in this delicate play that is getting a flawless production in the Lyttleton stage of the National Theatre, in London.

There are three characters in the play and the entire action takes place in the tea room over one hour and forty minutes. Aristotle’s unities of time, place and action are adhered to.

The importance and brilliance of the play lie in the fact that it is not about mistreatment of blacks by whites. It presents a portrait of two black servants, Sam (Lucian Msamati) and Willie (Hammed Animashaun), who have been friends, companions, educators and saviors of the young white boy Hally (Anson Boon). Fugard wants to show that racism not only exists (everyone knows that) but that it is so deeply rooted as to be almost ineradicable. 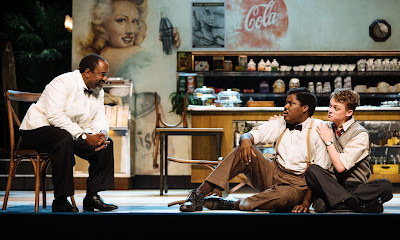 Lucian Msamati, Hammed Animashaun and Anson Moon. Photo: Helen Murray
Hally comes from an unhappy family. His mother is domineering and his father a weakling who is ill. He does not like his parents and has found solace and companionship with Sam and Willie. But his parents are also racist to the core and have taught their son, however subtly and perniciously, to be a racist as well.

Hally is a callow boy who does not do well in school. As a child in boarding school, he used to escape from his parents by hiding under Sam’s bed. Hally and Sam have prime memories of pleasant events including Sam’s construction of a kite for Hally that sent him flying higher than the kite itself. There is love and friendship between them.

But we see the cracks in the relationship. Hally cannot accept the fact that the two tearoom workers are involved in artistic activities - ballroom dancing. He looks down on them even though Sam is probably smarter than him

Sam has a very high quotient of decency and understanding and he tries to prevent the rift from developing between he son and his father. 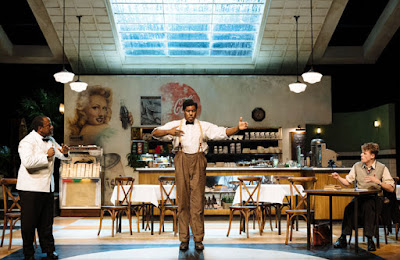 Lucian Msamati, Hammed Animashaun and Anson Moon. Photo: Helen Murray
In spite of all that has happened between the friends, Hally’s racism come out full blown and he pulls rank. He is WHITE therefore superior and they are mere servants and ultimately inferior to him. Hally did not even notice that there were park benches marked for “whites only” when he flew his kite nor, when his father gets drunk and incontinent in a bar, Sam had to ask for permission to enter the bar to carry Hally’s father out.

The play moves from pleasant memories to talk about social reform until its riveting climax when Hally spits on Sam as if he were a dog. It is a startling and arresting theatrical moment that takes your breath away. It should, because that is the reality and the result of apartheid but nevertheless it still shocks.

I have spoken at length about the play and in effect have given the highest praise to the three actors and director Roy Alexander Weise who moved me and shocked me as if it were the first time I was seeing the play. It was not.

Msamati’s Sam exudes intelligence, humanity, decency and deep understanding of people. Animashaun’s Willie is a dreamer, not that bright but also a wife beater. Fugard does not idealize anyone. Boon’s Hally is an unhappy youngster who may have grown into a decent human being had he not been injected with so much racist poison that it may never get out of his soul.

The set by Rajha Shakiry consists of the counter, chairs and tables of a tearoom that does the job splendidly.

James Karas is the Senior Editor - Culture of The Greek Press
Posted by James Karas at 11:59 PM