On November 1, 2006, Alexander Litvinenko, a Russian defector to the United Kingdom, became violently ill as a result of ingesting a highly toxic element known as Polonium-2010. He had met with two Russian agents, Dimitri Kovtun and Andrei Lugovoi, and later investigation revealed that the poison was given to Litvinenko by these two gentlemen.

Litvinenko died on November 23, 2006 and British authorities showed little interest in investigating the murder of a British citizen which he had become.

His wife Marina pressed the issue including taking the government to court and an inquiry was eventually held and a report issued in January 2016. The conclusion was that Litvinenko was killed by Lugovoi and Kovtun and that it was highly probable that the crime was committed with the approval of Vladimir Putin. 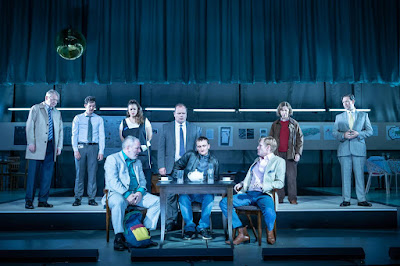 Tom Brooke, centre, as Alexander Litvinenko with cast.
Photograph: Marc Brenner
This summary does not contain too many laughs and one would seriously doubt that there is enough material there for a play that has singing, comedy, satire and attempts to be light entertainment. That is what Lucy Prebble does in her adaptation of Luke Harding’s book about the murder of Litvinenko that is now playing at London’s Old Vic Theatre.

Tom Brooke as Litvinenko looked like a rather sallow and ordinary man who loves his wife and son and is escaping from a dictatorial regime. This is the man who dared criticize Putin and made a daring escape from Russia?  MyAnna Buring is very convincing as his dedicated wife Marina who pursues the matter long after his death.

The British doctors, scientists and detectives who get involved in the case play it straight and the way one would expect them to act. Lugovoi (Michael Shaeffer) and Kovtun (Lloyd Hutchinson) are played like clowns. One of them climbs down the ladder on one side of the stage and they are generally good for a laugh.

Russian oligarch and probably archcriminal Boris Bereszovsky (Peter Polycarpou) is just a riot and he even breaks into song. There is a sort of host who can be seen in various places of the theatre. He wonders that we came back after the intermission and quips that the theatre programme at four pounds is very expensive. We are even treated to a segment of the Russian puppet satire show called Kukli. Just the sort of the thing the murder of Litvinenko needs. 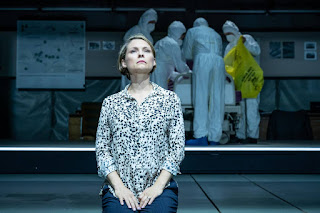 MyAnna Buring as Marina. Photo: Marc Brenner
We do get many facts about the murder and especially the subsequent investigation.  We learn that the then Home Secretary Theresa May, refused to open an investigation because it may disturb the United Kingdom’s delicate relations with Russia and cost a lot of money.
A Very Expensive Poison has a lot of ground to cover and the idea of constructing a play around it seems quixotic. Fifteen actors play fifty-seven characters “plus other roles” if I counted them correctly. There are numerous scene changes to accommodate the events that unrolled after Litvinenko’s poisoning and the investigation. That alone is a discouraging factor for anyone who wants to turn a lengthy and complex set of events into a couple of hours of theatre.

In any event, there it is.
_______________
A Very Expensive Poison by Lucy Prebble based on the book by Luke Harding continues until October 5, 2019 at the Old Vic Theatre, The Cut, London, England. http://www.oldvictheatre.com/

James Karas is the Senior Editor - Culture of the Greek Press
Posted by James Karas at 10:26 AM