THE FLICK - REVIEW OF OUTSTANDING PRODUCTION OF ANNIE BAKER’S PLAY

Annie Baker’s masterful play The Flick is based on a very simple plotline: the lives of three menial laborers. They work in a rundown movie theatre in Massachusetts that is still showing films using the old reels and projector. The play is set in the rows of seats of the theatre with the projection room above. I need hardly add that the simplicity is deceptive.

Two of the workers, Sam and Avery, sweep under the seats and mop the floor of the theatre and we see them doing that almost throughout the three plus hours of the performance. The third worker, Rose, is a notch above them because she has been promoted to projectionist. There is a fourth character but his role is relatively minor. 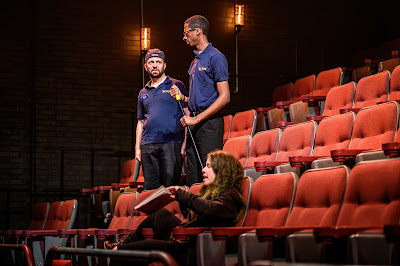 The three workers are slowly, deliberately and with great acuity revealed as complex, troubled and deeply human beings who have difficulty establishing meaningful relations with other people.

Rose is a woman in search of a relationship or some human contact at least. She has resorted to astrology and reads details about the relationships of people based on their zodiac sign. She goes into short, promiscuous affairs and leads a lonely life. Amy Keating’s performance as Rose is stellar. She appears jaunty with a devil-may-care attitude and loose clothes but reveals her inner void and search for contact. Her attempt at sexual contact with Avery is a disaster and her attempt to reach Sam is just as awful in a thoroughly dramatic scene where she yells at him to just get him to turn and look at her.

Colin Doyle gives a nuanced, sensitive and intuitive performance as Sam. He encapsulates his life when asked by Avery, the college student, what he wants to do when he grows up. Sam answers that he is grown up. The line garners a laugh (there is a lot of laughter during the performance) but the reality is that Sam has reached the apogee of his career and he can’t even be promoted to projectionist, a job that is about to disappear in any event. 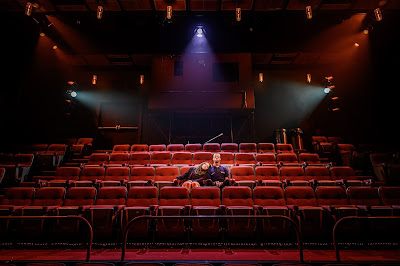 Amy Keating and Durae McFarlane. Photo: Dahlia Katz
Avery is perhaps the most complex character in the play and here we have a performance sans pareil by Durae McFarlane. He presents Avery as a slender, awkward, deferential and painfully shy man. But he is very intelligent and a movie aficionado without equal. McFarlane’s portrayal from every body movement, to facial expression to vocal intonation represents the deeply troubled young man. Avery is depressed to the point of attempting suicide and is unable to trust anyone. Worse than that he seems to exist only as a movie buff who uses his knowledge of film as a faux shield against reality. A superb performance by McFarlane.

Movies form the backdrop and are an essential part of the play. Sam and Avery play games testing their knowledge of moves. We hear numerous soundtracks in the outstanding audio system of Crow’s Theatre.

The set and lighting by Nick Blais are impressive. The set consists of about half a dozen rows of theatre seats facing the audience and behind them is the unseen screen on which movies are shown.

The Flick is a subtle, richly-textured play that gives detailed portrayals of its characters. The atmosphere of being at the movies is created by the physical décor, the music and lighting with superb success.

Director Cushman shows his ability to pay attention to the smallest detail and the slightest nuance in his handling of the cast and the result is an outstanding night at the theatre.
________________
The Flick by Annie Baker in a production by Outside the March and Crow’s Theatre continues until November 2, 2019 at the Streetcar Crowsnest Theatre, 345 Carlaw Avenue, Toronto, Ontario M4M 2T1. http://crowstheatre.com/ http://outsidethemarch.ca/

James Karas is the Senior Editor - Culture of The Greek Press.
Posted by James Karas at 10:34 PM