Antonin Dvořák’s Rusalka was first performed by the Canadian Opera Company in 2009, well over 100 years after its premiere in Prague. Yes, I know the COC was not around in 1901 but it was a heck of a wait. Ten years later it is back with a new staging by David McVicar and that makes for some lost time. The Met was not much better. It did not get around to producing it until 1993.

Rusalka needs a damn good Rusalka and the COC has one of the best. To put it in perspective, New York has Renee Fleming, Moscow has Anna Netrebko, Bucharest has Angela Gheorghiu and Toronto has Sondra Radvanovsky. (Yes, I know she was born in Illinois but now she is ours.)

Rusalka is a water nymph or mermaid, if you prefer, who falls in love with a mortal who happens to be a Prince. He falls in love with her too but there are some major obstacles to the union of a mortal with a mermaid. The first obstacle is her father Vodnik who is a water gnome and says NO in Czechoslovakian. The promise of love, a soul and eternal life in the hereafter, impel Rusalka to seek the help of the witch Jezibaba. She can help Rusalka switch to mortal but she will lose her voice, and if the Prince betrays her, he must die and she will be damned forever. 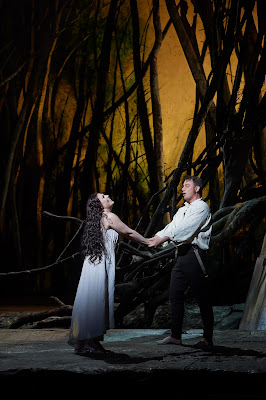 Sondra Radvanovsky as Rusalka and Pavel Černoch as the Prince.
Photo: Michael Cooper
Radvanovsky dominates the performance with vocal splendour and superb acting. Rusalka goes from pleading for transformation, to the joy of love, to the rebuff by her lover, to the pangs of unrequited love, to the torment of exclusion by her family and her final tragic end. Radvanovsky handles all these convulsive changes with aplomb and at the end gets a well-deserved standing ovation.

Bass Stefan Kocan has a big, resonant voice and he sings a marvelous Vodnik. Tenor Pavel Cernoch has a fine voice with a splendid midrange but it is not a big one. To be fair he did mange some flourishes and the orchestra never drowned him out. We could always hear him but he may have suffered in comparison to the more domineering voices of Radvanovsky and soprano Keri Alkema who sang the part of the Foreign Princess. The latter had good reason to express herself as the would-be bride who did not like the Prince’s infatuation with Rusalka. Mezzo soprano Elena Manistina does a fine job as the colourful witch Jezibaba.

David McVicar does imaginative and superb work with the production. He does not wait for the overture to be over but starts with a minor tale of rejection. We then see the alluring and very active Wood Nymphs (Anna-Sophie Neher, Jamie Groote and Lauren Segal). With judicious use of dances by chorographer Andrew George and the fine cast he is able to maintain a fine pace even with the orchestral passages where there is no singing. 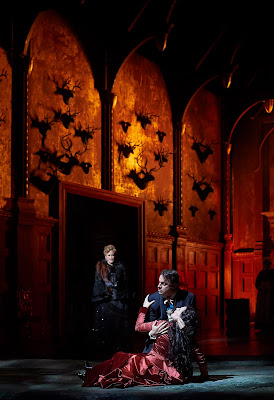 Keri Alkema as the Foreign Princess (background), Pavel Černoch
and Sondra Radvanovsky. Photo: Michael Cooper
John Macfarlane’s set consists of the indication of a forest with a moon in the background and a meadow with a lake in the foreground. The lake is indicated by a hole in the floor boards with some mist emanating from it. No water on stage.  Simple and effective. The second scene shows the busy kitchen where frantic preparations are made for the wedding. A huge fireplace and carcasses are in view in a colourful array. The palace in the subsequent scene is a grand gothic hall.

This time we had to wait only ten years even if the COC had to borrow a production from the Lyric Opera of Chicago that was first seen there 2014.

By the way, it is worth mentioning that the COC’s production in 2009 was pretty speedy compared to what the redoubtable Royal Opera, Covent Garden did. It staged the opera for a first time in 2012 and set it in a brothel. You can still hear the boos.
___________________
Rusalka by Antonin Dvořák with text by Jaroslav Kvapil is being performed seven times until October 26, 2019 on various dates at the Four Seasons Centre for the Performing Arts, 145 Queen Street West, Toronto, Ontario. Tel:  416-363-6671. www.coc.ca

James Karas is the Senior Editor - Culture of The Greek Press
Posted by James Karas at 12:18 PM