ALMIGHTY VOICE AND HIS WIFE – REVIEW OF SOULPEPPER PRODUCTION

Almighty Voice and his Wife by Daniel David Moses consists of two distinct but related plays about Canadian natives. It is not promoted as such but the differences are obvious as are the connecting threads. The play receives a sensitive and superb production at Soulpepper directed by Jani Lauzon.

Almighty Voice was a Cree who lived in Saskatchewan in the late 19th century. He killed a cow for food and was arrested by the Mounted Police and thrown in jail. He escaped and managed to elude capture. But in the meantime he killed a Mountie and after a massive manhunt was found and shot dead.

The first half of Moses’ two-hander is a lyrical, comic and beautifully told story about Almighty (James Dallas Smith) and White Girl (Michaela Washburn), a Cree woman that he courts and marries. The courtship has elements of romance, humour and beauty. The rest of the segment is dramatic and moving. 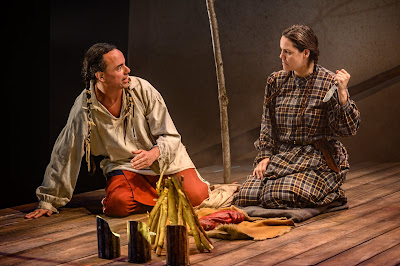 James Dallas Smith and Michaela Washburn. Photo: Dahlia Katz
In the second half we are presented with a minstrel show in a school with the ghost of Almighty Voice and a white, male Interlocutor played by Washburn. The act contains songs, dance routines and “humorous” sketches. The Interlocutor wears a bright red Mountie tunic and the show is a satirical burlesque and serious critique of the type of show that showed indigenous people and especially black Americans in one of the many ugly manifestations of racism. Almighty Voice of course deals with Canadian Aborigines.

The second act is self-consciously theatrical as the Ghost of Almighty and the Interlocutor work to entertain the audience of the minstrel show. On the surface it is all supposed to be jolly good fun but one can hardly miss the allusion to the treatment of Aborigines when the Interlocutor brags that “we have the guns…we did it to the buffalo. Do you want to be next?”

The supreme irony comes when the Interlocutor sings “The Sioux Song” to the tune of “Amazing Grace.” There is no grace here, only exploitation of Aborigines. It is followed by “Sweet Sioux” about the exploitation of native women and the corruption of the legal system where Aborigines are involved.

Some marvelous things happen at the end but I will not disclose them. 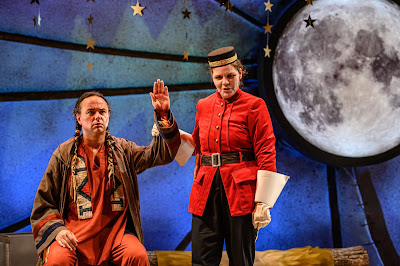 James Dallas Smith and Michaela Washburn. Photo: Dahlia Katz
Almighty Voice is a wonderful play for the two actors and the director. The first act is a conventional story involving Aborigines and, as I said, it is moving and funny. Smith and Washburn handle it with aplomb. The second act is far more complex and requires a great deal of flexibility and acting talent. The two go through a number of phases and it looks almost like a test in acting school about how many things they can do. They do them all with expertise, confidence and panache. Outstanding acting.

Director Jani Lauzon may have a simple task in the first act, but her work is decidedly cut out for her in the second act. She must guide the actors through the numerous phases with precision and a sure hand and she does so unfailingly.

The fate of Canada’s Aborigines, from reservations to residential schools, is a blot on our history. The stories about them in the media are almost invariably negative. There are plays about them that are more reflective and searching but not enough. Moses is a prolific writer who has written a significant number of plays about Aborigines including Almighty Voice and his Wife which premiered in 1991. They are a part of what may change our perceptions and the realty of their fate.


_________
Almighty Voice and his Wife by Daniel David Moses continues until November 10, 2019 at the Young Centre for the Performing Arts, 55 Tank House Lane, Toronto, Ontario. www.soulpepper.ca
James Karas is the Senior Editor - Culture of The Greek Press.
Posted by James Karas at 12:06 AM