Peter Shaffer’s Amadeus was a smash hit forty years ago in London and around the world and was transferred into one of the finest films of all time, directed by Milos Forman. The play is still a going concern and the Shakespeare Folger Library has given it a redoubtable production at its lovely theatre in Washington, D.C.

The play is ostensibly about the fictitious conflict between Wolfgang Amadeus Mozart and the Italian composer Antonio Salieri in 18th century Vienna. The jealous and second-rate composer Salieri wants to destroy the genius Mozart in the court of Emperor Joseph II and there is a rumour that he in fact poisoned him. Salieri is on his death bed in 1823 and he recalls what happened more than thirty years before that. 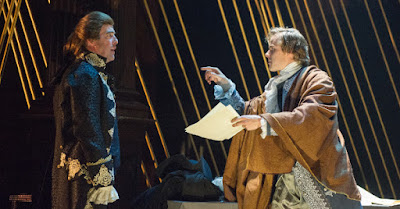 Ian Merrill Peakes as Salieri and Samuel Adams as Mozart.
Photo: C. Stanley Photography
Salieri makes a deal with God (not Christ, he insists) that if He makes him a great composer he will dedicate his life to Him.  There is no evidence that God was a part of the “deal” because He capriciously and unfairly gives the gift to compose great music effortlessly to the giggling and dirty-minded Mozart. He gives Salieri the gift of appreciating and recognizing great music. God has a great sense of humour.

The lion’s share of work on the stage falls on Ian Merrill Peakes as Salieri. We meet him as an old man in the last hour of his life. He wants Mozart’s forgiveness as he recalls his youth, happier days as the toast of Vienna and his crushing defeat upon the appearance of the child genius.  Peakes handles Salieri as an old man in a wheel chair reasonably well and then sheds his hat and robe to become his young self.

We see Salieri’s passion for music and women, and his frustration and furor at being unable to compose like Mozart and losing his prize pupil to him. His anger is directed at God as his faith is shaken after offering so much to the deity.  Peakes gives a fine portrayal as the passionate composer who in the end realizes that he has become a footnote in musical history as the patron saint of mediocrity.

Samuel Adams as Mozart has a silly, high pitched giggle, is a bit of a dandy, a social boor and a foulmouthed composer who can write music as if taking dictation from God. We see him as a braggart, always broke, in triumph and in despair until we witness his final deterioration as he is composing his famous Requiem. He is not likeable but he is a genius and Adams delivers him as such. 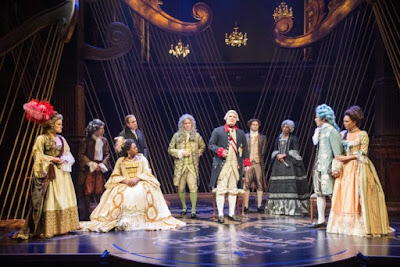 Members of the cast of Amadeus at Folger Theatre. Photo: C. Stanley Photography
Shaffer portrays the people responsible for musical life at court and in Vienna as out of touch boors. The all get bad press but they are entertaining as relics facing a genius. Justin Adams is the Baron, James Joseph O’Neill is Count Orsini and Ned Read is Kapellmeister Bonno.

The Emperor (John Taylor Phillips) in his several appearances is mostly clueless and uses his favourite phrase “there it is” to get out of every situation and give us a laugh.

Lilli Hokama as Mozart’s wife Constance is tolerant, sympathetic and ambitious on behalf of her husband. She is willing to offer her body to Salieri for a “quickie” just to get him to recommend her husband to the Emperor. A fine performance.

Amanda Bailey and Louis Butelli play the two Venticelli (Little Winds), a sort of Chorus that gives us some information, a lot of gossip and rumours.

One of the pleasures of watching the play is sharing Salieri’s enthusiasm for Mozart’s music, especially his marvelous appreciation of certain passages. We are treated to snatches of music to whet our appetite for more.

The set by Tony Cisek in the beautifully paneled Folger Theatre consists of oversized pieces wood in the form of parts of a harp. Given the subject, it is a superb set. The 18th costumes by Mariah Anzaldo Hale are gorgeous.

The production, ably directed by Richard Clifford had a slightly sluggish beginning but it picked up the pace and in the end provided a fine performance of a modern classic.
______________
Amadeus by Peter Shaffer continues until December 22, 2019 at the Folger Theatre, Folger Shakespeare Library, 201 E Capitol St SE, Washington, DC 20003. https://www.folger.edu/

James Karas is the Senior Editor of The Greek Press. www.greekpress.com
Posted by James Karas at 11:58 PM