Richard Bean’s adaptation of Carlo Goldoni’s The Servant of Two Masters premiered at London’s National Theatre in 2011 and it was a resounding success. Bean called his adaptation One Man, Two Guvnors and its freewheeling, farcical elements as directed by Nicholas Hytner made it a hit. It has toured extensively including a successful run on Broadway.

The National started transmitting performances in 2009 and One Man was first broadcast in September 2011. In celebration of the 10th season of broadcasts, the National is showing the 2011 production of One Man again at Cineplex theatres. 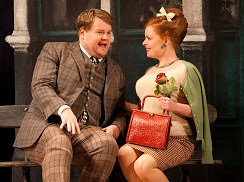 James Corden and Suzie Toase. Photo: John Persson
Goldoni worked within the tradition of commedia dell’arte of stock characters, convoluted plots and physical comedy but imposed a plot to be followed by the actors. He opposed the traditional fashion where actors who specialized in certain roles improvised much of their acting.

Bean has transferred the action from Venice to Brighton, England in 1963 and has remained faithful to some of the commedia dell’arte traditions but clearly with a script that must be followed.

The star of the show is James Corden as Francis Henshall, the clownish servant. Henshall was the minder of Roscoe Crabbe who is dead. Roscoe’s sister Rachel (Jemima Rooper) shows up in Brighton disguised as her twin Roscoe to claim a pile of dowry money from Charlie Clench (Fred Ridgway). Roscoe and Clench’s daughter Pauline (Claire Lams) were to be engaged but he was killed by Stanley (Oliver Chris) who happens to be Rachel’s boyfriend.

In the absence of Roscoe, Pauline wants to marry Alan (Daniel Rigby) the son of the crooked lawyer Harry Dangle (Martyn Ellis). In the meantime Francis has his eye on the busty Dolly (Suzie Toase) who is Clench’s bookkeeper. He is also hungry and broke and gets the chance to work for Stanley and (you guessed it) complications ensue for about two and a half hours.

There is verbal, physical and slapstick comedy. Characters punch each other, act silly, engage the audience and have numerous aside comments. They bring audience members on the stage and address the audience directly. At one point Francis asks where the diary of a character is and is told by an audience member. He thanks her and when he looks at the diary “realizes” that it is the wrong one and calls the audience member “a stupid cow.” The audience loves it.

The convoluted plot continues to fold and unfold with acting and overacting for the sole purpose of evoking laughter. There is no subtlety and no need for it. The characters are types and there is no character development or any need for it.

Dolly is big chested, not too bright and no pushover, but she wants a husband. Alan is an aspiring actor and an avid lover. Clench and his friend Lloyd (Trevor Laird) are former prison inmates.

The opportunities for doing and overdoing just about everything are rampant. That does not mean that they are all funny and as with much in theatre they are a matter of taste.
________________
One Man, Two Guvnors by Richard Bean based on The Servant of Two Masters by Carlo Goldoni was The Norman Conquests (2013)
Photos by Cylla von Tiedemannshown at various Cineplex Cinemas on October 24, 2019. For more information visit http://www.cineplex.com/events

James Karas is the Senor Editor - Culture of The Greek Press
Posted by James Karas at 1:26 PM