BUFFOON – REVIEW OF NEW PLAY BY ANOSH IRANI AT TARRAGON

Buffoon is a new play by Anosh Irani that showcases the immense acting talent of Anand Rajaram. He gives a solo performance at the Tarragon Theatre Extra Space for about 90 minutes with a chair as his only physical prop and his genius.

Felix is a child of the circus. In the opening scene he gives a dramatic-comic description of his birth by Trapeze artist The Flying Olga. He is born in the circus, of course and he spends most of his life there. The play has several plot strands but Felix’s relations with his parents, Ishmael or Smile, the ticket seller man who adopts him, and Aja, the woman he falls in love with are the most important. 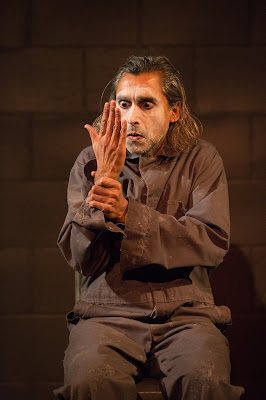 Anand Rajaram in Buffoon - Photo by Cylla von Tiedemann
Rajaram is a master of mime, voice changes, physical contortions from facial expressions to virtual acrobatics and has a marvelous emotional range. He is rarely still as he illustrates almost everything he tells us with a gesture, a grimace, a change in accent or a more dramatic physical activity.

He was born in the Leningrad circus and his parents Olga and Frank abandon him to one Ishmael who is better known as Smile. Ishmael has adopted a posh English accent because it sounds better. He wants Felix to read and gives him a copy of Moby Dick which opens, of course, with the words “Call me Ishmael.”

Felix, face covered with white chalk like a clown, walks on stage diffidently, indeed nervously. He tells us that he really has nothing to say, He gives us his philosophy of life in Mark Twain’s phrase that “The two most important days in your life are the day you were born and the day you find out why.” The day Felix was born, with his mother going into labour and having dramatic contractions in the circus, is dramatic, frightful and quite funny. Felix makes it funny.

His love life with Aja proceeds from his utter ignorance about love to a tragic conclusion. He is so ignorant at the beginning that he reads Romeo and Juliet for instruction. He goes through a tragic separation form Smile who gives him money that he skimmed from ticket sales to the circus and the sale of drugs. 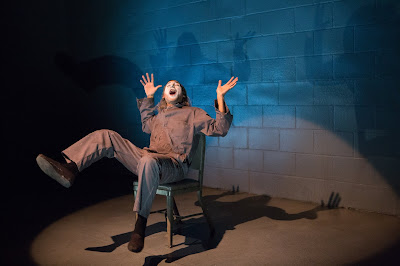 Anand Rajaram in Buffoon - Photo by Cylla von Tiedemann
The plot strands do get complicated and somewhat opaque but Rajaram’s inexhaustible store of energy kept the show going.

There is real drama in the end when we realize who Felix is talking to. It brings us back to the beginning of the story. I will not say anything further.

The show is a marriage between the actor and director Richard Rose, seamless, symbiotic and extraordinary. Separating the actor from the director is almost like separating the dancer from the dance. If that does not convince to see this play, nothing will.
_______________
Buffoon by Anosh Irani continues until December 15, 2019 at the Tarragon Theatre, Extra Space, 30 Bridgman Ave. Toronto, Ontario.  www.tarragontheatre.com

James Karas is the Senior Editor - Culture of The Greek Press
Posted by James Karas at 10:37 PM