MADAMA BUTTERFLY - REVIEW OF 2019 REVIVAL AT THE MET

Anthony Minghella’s production of Madama Butterfly premiered at the English National Opera in London in 2005 and at the Met in New York in 2006. It is still a going concern and is telecast Live in HD from the Met this season.

This is the fifth time I seen this production and I must admit that Minghella’s use of Bunraku puppetry has lost some of its appeal. The Bunraku puppets are not traditional dolls manipulated by strings but plastic devices that require a lot of puppeteers on the stage to manipulate them. The little boy in the opera, for example, requires three puppeteers to make it move around. Each handles a different part of its body and the effect is frequently interesting. The puppets are used for Cio-Cio San’s son and for her in a ballet sequence at the beginning of Act I, Scene 2.

The puppeteers are dressed in black and their faces are covered by veils. They give admirable evidence of their athleticisms and adeptness in handling the puppets.  There is a complex use of mirrors, birds in flight, stars in the sky and commotion. 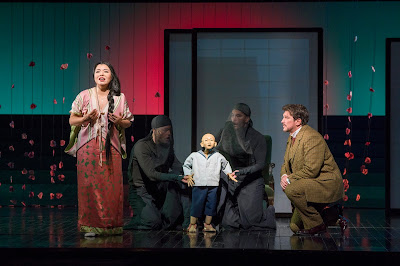 Hui He as Cio-Cio-San and Paulo Szot as Sharpless. Photo: Richard Termine / Met Opera
Hui He does may not fit the physical description of a very young Japanese girl who falls in love with Pinkerton, a creep of an American sailor. But she has a beautiful voice that expresses Cio-Cio San’s deep emotions and we forget everything else. Her “Un bel di vedremo” where she imagines the arrival of her husband’s ship in the harbour of Nagasaki is full of passion, tenderness and heart-wrenching longing.

Tenor Bruce Sledge sang the role of Pinkerton in the Live from the Met broadcast replacing the indisposed Andrea Carè, I am not sure if he is the ideal Pinkerton but as a last minute replacement he deserves gratitude rather than criticism.

Paulo Szot gives an exemplary performance as Sharpless, the American Consul. He is a pillar of decency and he expresses both vocally and physically his discomfort, disgust and sympathy. He is the messenger of Pinkerton’s betrayal and he knows that his news will kill Cio-Cio San. We see all of this in his sensitive facial expressions alone. Placido Domingo was scheduled to sing the role but the allegations of misconduct by numerous women have caused him to relinquish all further singing on the Met stage.

Mezzo soprano Elizabeth DeShong is a spunky, faithful and compassionate Suzuki. She has a big voice, a pleasant personality and a fine stage presence that make her a pleasure to watch.
Theses broadcasts need a Director for Live Cinema that people who go to the opera house are not burdened with. He is the person who decides what we see by controlling every long shot, close-up, angle and, most importantly, duration of each shot. 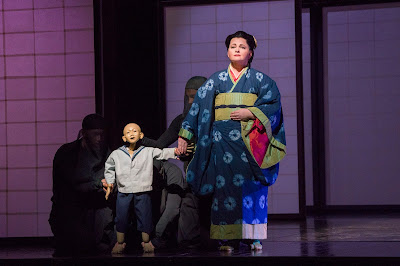 Elizabeth DeShong as Suzuki.Photo: Richard Termine / Met Opera
Habib Azar was the man responsible for this broadcast. I tried hard, I really did, to ignore the travesty of his choices but could not. Near the end I tried to estimate how long he was able to keep his finger off his converter (or whatever he is using). I don’t think I saw too many if any, scenes where he did not click a change for five seconds. Some shots lasted much less than that. There are many instances that demand that we simply watch the scene and be able to see several people on stage at the same time for action and reaction. Not a chance. He just kept clicking like a child on a video game that just plays with the controls. He screwed up on several occasions including during the emotional climax of the opera when Cio-Cio San sings “Tu Tu Piccolo Iddio!” as she is about to commit suicide. Good grief!

You may have to shut your eyes on occasion to listen to the splendid music played by the Met Orchestra conducted by Pier Giorgio Morandi, the Metropolitan Opera Chorus and the singers just to avoid the childish shot changes by Azar.
____________


Madama Butterfly by Giacomo Puccini was shown Live in HD at select Cineplex theatres across Canada on November 9, 2019. Encores will be shown on January 25, 27, 29 & February 9, 2020. For more information go to: www.cineplex.com/events


James Karas is the Senior Editor - Culture of The Greek Press  www.greekpress.ca
Posted by James Karas at 12:58 AM