Daniel MacIvor is a man of the theatre with playwriting, acting and directing to his credit. He has also made forays into film and television and has built a strong reputation as a solo performer with a solid portfolio of works. His latest creation with director and dramaturge Daniel Brooks is Let’s Run Away which is now playing at the Marilyn and Charles Baillie Theatre in Toronto.

MacIvor is an expert and talented solo performer. He enters the playing area nervously. Runs around the stage as if he were an amateur, very uneasy performer who is trying to get comfortable with the set and the equipment. He fools all of us as he settles into the character of Peter who will tell us his story over the next eighty minutes. 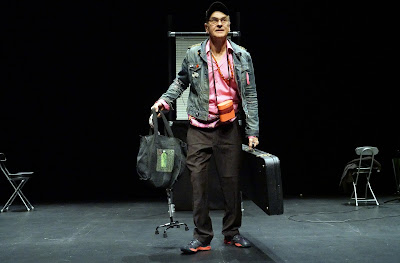 Daniel MacIvor. Photo: Canadian Stage
Peter starts by reading from his mother’s unpublished journal that mentions him. But wait. It is not accurate and he interjects, corrects and adds. He takes us through his confused life story from being abandoned by his mother, life in a foster home, in a motel, in a basement and other events that have shaped his bitter life.

He runs nervously and neurotically between microphones. He scolds the technician who handles the lighting and is very aware of his audience. He makes rich literary references from Northrop Frye’s Anatomy of Criticism to Virginia Woolf’s To The Lighthouse. The books are sent to him by his mother who abandoned him twice.


Peter sings, runs back and forth and has so many insecurities, anxieties and neuroses it is hard to keep up with him. His story is told in fragments with numerous diversions and distractions that I found difficult to follow. I thought that Peter’s story did not have enough for an eighty minute performance but the fact is it has too much.

MacIvor’s performance is superb but the fragmented story struck me as almost incoherent and I simply could not get into it.
__________

Let’s Run Away  by Daniel MacIvor (writer and performer) and Daniel Brooks (dramaturge and director) in a production by reWork Productions, presented by Canadian Stage runs until November 17, 2019 at the Marilyn and Charles Baillie Theatre, 26 Berkeley Street, Toronto, Ontario. www.canadianstage.com.com