Linda Vista is a neighbourhood in San Diego, California and it is also the title of a new play by Tracy Letts. I will not deal with the neighborhood but will say some very nice things about a funny, dramatic and well-acted play.

Dick Wheeler (Ian Barford), the central character, at age 50 repairs old cameras in a dinky shop and is not a happy man. He was a photographer for a Chicago newspaper but now he is in the midst of a messy divorce and he does not get along with his teenage son and considers himself a loser.

In his search for companionship, he gets involved with two women and both relationships are disastrous for which he is responsible. He may have learned something and there is some hope about his attempt at a third relationship but that is left up in the air at the end of the play. 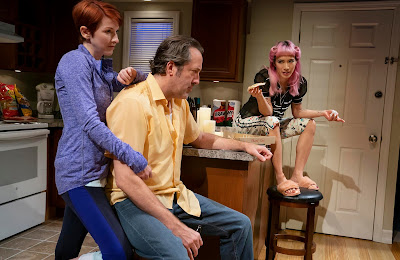 His first relationship is with Jules (Cora Vander Broek), an attractive, sympathetic woman with a problem past. She falls in love with Wheeler but he is incapable of solidifying the relationship and puts an end to it. The two engage in quite explicit if simulated sex and nudity but manage to be funny much of the time. Jules’ instinctive empathy and understanding of Wheeler are not enough to get through to his feeling of inferiority. Marvelous work by Broek.

Wheler gets involved with Minnie (Chantal Thuy), a young, abused, pregnant Vietnamese woman who has been thrown out by her boyfriend. She eventually dumps him and his dramatic begging for her to stay has no effect on her. Thuy’s character is somewhat mysterious, perhaps because of her awful past but the actress does excellent work.

The connecting scenes and much comedy is supplied by Wheeler’s long-time friend Paul (Jim True-Frost) his wife Margaret (Sally Murphy) and his boss Michael (Troy West). His co-worker Anita (Caroline Neff) plays a more significant role at the end of the play. All do fine jobs in their roles. 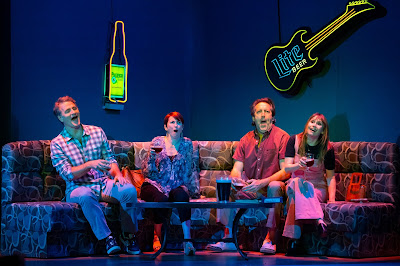 From left: Jim True-Frost, Cora Vander Broek, Ian Barford and Sally Murphy.
Photo: Joan Marcus
Letts touches on politics, sexual harassment and current events. There are intelligent comments about the definition of photography and the distraught Wheeler talks and argues vehemently about his former profession. He can be passionate, argumentative and extremely unpleasant.

The play takes place in Wheeler’s apartment which has a kitchen, a bedroom and an exit door. We also go to a karaoke bar, a gym and a couple of other less-well-defined venues. Set designer Todd Rosenthal creates a revolving set with four playing areas that can be quickly changed when we are watching another section.

Linda Vista is directed ably by Dexter Bullard and provides a very thoughtful and highly entertaining night at the theatre.

James Karas is the Senior Editor - Culture of The Greek Press www.greekpress.ca
Posted by James Karas at 12:34 AM