BETWEEN BREATHS – REVIEW OF PLAY ABOUT JON LIEN AT FACTORY THEATRE

Can you write an effective play and illustrate the life of a humanitarian scientist who devoted much of his life to rescuing marine animals, mostly whales off the coast of Newfoundland? Robert Chafe has. The play is Between Breaths about Dr. Jon Lien who was a professor at Memorial University. He rescued more than 500 whales that were caught in fishing nets, a feat that involved knowledge, expertise, considerable risk and just plain guts. Lien had them all.

Chafe wants to give some details about Lien’s life but he also wants to demonstrate the difficulties and risks of untangling massive trapped animals. 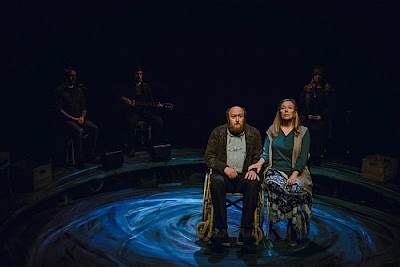 Steve O'Connell and Berni Stapleton
The play has three characters, Jon (Steve O’Connell), his wife Judy (Berni Stapleton) and his assistant Wayne (Darryl Hopkins). It also features three musicians (Brianna Gosse, Steve Maloney and Kevin Woolridge) who are on stage throughout the performance and play music composed and arranged by The Once.

In the opening scene we see Jon seated in a wheelchair and unable to speak. He is clearly suffering from a kind of dementia. He is comforted by his wife but we witness the tragic end of life. In fact Dr. Lien died in 2010 at 71 after suffering from mental illness for many years.

The play opens with his death but it takes us though episodes of his life and ends with the triumphal saving of a whale. The play is indeed a tribute to a great humanitarian and it is no doubt deserved.

How well does it work as a play? It has its moments but in the end it does not work particularly well. The musicians provide background music and songs that add nothing to the production. Because they play most of the time, the actors have to be seriously and obviously miked and some of the time their delivery is simply stentorian. In a small theatre, the mikes should be unnecessary and if the music makes them a necessity, we can do without the music. 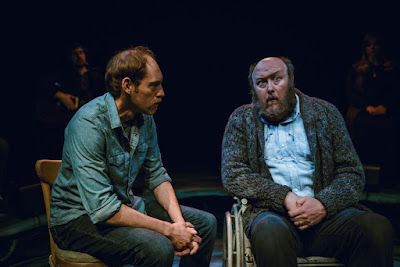 Darryl Hopkins and Steve O'Connell
The set by Shawn Kerwin has the musicians occupy a semicircle at the back of the stage. The centre of the stage features an area that is supposed to represent the ocean and the action takes place in front of that, close to the audience. There is lighting design by Leigh Ann Vardy, and sound design by Brian Kenny. These are necessities for illustrating the rescue of a whale and as such they are effective.

Director Jillian Keiley and the actors make great efforts to convince us that what is happening on stage represents the rescue of a whale. It is not convincing and we have to accept the fact that certain things cannot be done well on the stage.

The actors deserve kudos for their work especially O’Connell as the main character.

The admiration for Dr. Lien’s work, his contribution to marine science are well documented and he is deservedly honoured for his achievements. The play does make his name known to people who may have never heard of him and it is a delight to see Artistic Fraud of Newfoundland perform in Toronto. (I am sure there is a profound reason for the unorthodox name (simple irony?) but it escapes me.)
_________
Between Breaths by Robert Chafe in a production by Artistic Fraud of Newfoundland  opened on November 21 and runs until December 8, 2019 at the Factory Theatre, 125 Bathurst Street, Toronto, Ontario. www.factorytheatre.ca/